Oklahoma State's pride and joy is standing out at Team USA's mini-camp on both ends of the floor.

Share All sharing options for: In Sequence: Marcus Smart "steals" the show...literally

On each of the first two days attending Team USA's national mini-camp this week, the very first thing I saw when the horde of media was let in to watch practice was Marcus Smart making a play defensively and taking it all the way for a transition bucket. It's one thing to watch Smart display an improved jump shot when the ball swings his way, but for him to be able to rip the ball away from Paul George and to read the eyes of Jrue Holiday as he brings the ball up the floor before springing into the passing lane for a steal is beyond impressive.

I'll have a ton more on Smart in a three-part feature next week, but while going through some of my photos from the first two days, I found an interesting sequence of shots that I took when I was playing around with my new camera's rapid snap mode. 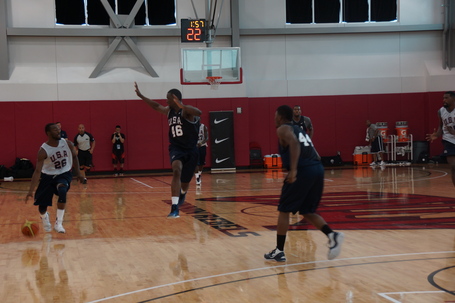 This is where the sequence began: Kemba Walker pushing the ball up the floor, as all point guards at the camp have been urged to do, as Smart (44, back to the camera) gets in position defensively. 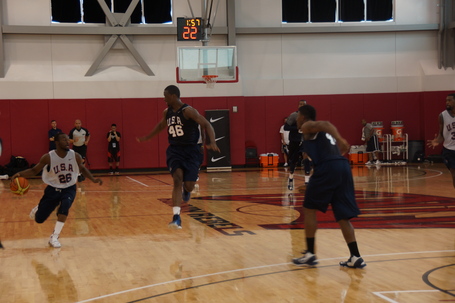 In this photo, Walker's eyes are clearly looking towards the opposite side of the floor, and he is thinking about passing to his teammate on a cut across the lane. 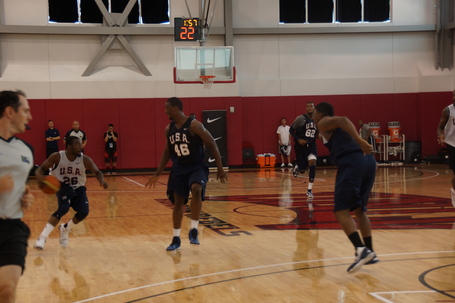 Walker is starting to dribble towards the middle of the floor so that he can have a better angle to make a pass. Harrison Barnes, who has sort of picked up Walker in transition, is not in position to stick with Walker while he crosses over, which should open up some space for Walker to make a play. 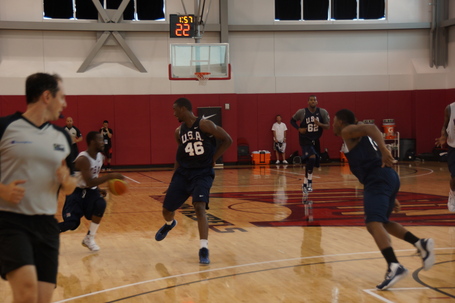 But as Walker evades Barnes, Smart realizes what Walker is looking to do: hit his cutting big man for an easy bucket. Smart's eyes were fixated on Walker the entire time, and the second Walker revealed his intentions, Smart readied to pounce. 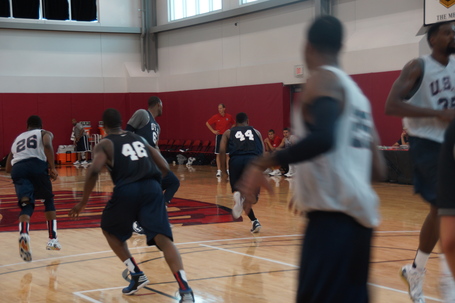 The next photo on my camera roll is this: Smart sprinting up the floor for an easy basket, most of team white still not aware that the ball had changed hands.

"Feel for the game" and "great instincts" may seem like basketball analysis fodder to those that are tired of the same old platitudes popping up every year around draft time, but in the case of Marcus Smart, there are some tangible skills that he possesses that fit the description of someone that has a tremendous "feel for the game."