Oklahoma State found their QB and debuted an impressive defensive package in a 21-3 grinder type win against an SEC opponent.

"After what happened today, I can't imagine that we won't feel like J.W. needs to start the next game. We'll talk to Clint. He has been great for us. If things didn't go well early, could he have had another opportunity or two or three? He sure could have. "But we had to make a decision as a coaching staff what direction we were going and we felt like we were getting bigger plays and had guys running in the open field more with the schemes we were using and that played to his advantage."

Anyone else feel like this was going to be the move all along? I mean, if Gundy was really torn he surely would have given Chelf more of a chance right?  The first 24 plays yesterday gained just 78 total yards, and then play #25 - an inside zone read around the left end - changed the direction of the game, and perhaps the season.

"That was a big play for us," Mike Yurcich said "Once that broke, then some other options opened up. Once something occurs and you do break the ice, something else becomes available because they have to adjust to it."

Break the ice indeed. Barring injury, I don't think Chelf will much more action. Walsh is clearly more athletic, and gives this team a better chance at winning football games. Nothing against Chelf. He's solid, and would probably start at most every other Big 12 school right now. I suppose it's a symptom of depth - something Oklahoma State is just getting used to.

Why are all of those guys standing up? All out Blitz? Holy Shit!

Those were just a few of my thoughts when I saw this yesterday. 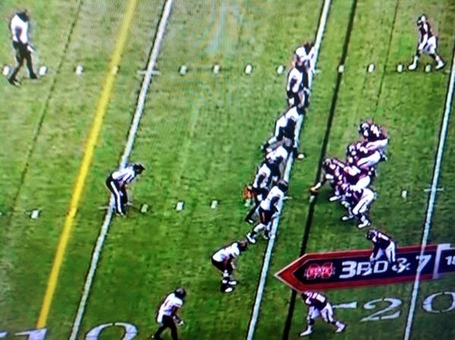 Spencer called this out of nowhere on a 3rd and 7 and forced Mississippi State to call a timeout. I was giddy. Haven't been this excited about Oklahoma State defensive football...ever. It's aggressive and could be absolutely deadly against young/inexperienced teams.

I found a good article about these "Blitz Heavy" fronts over at Smart Football Totally worth a read if you're in to that kind of thing. I can't get over the confusion that this could create and really, I can stop thinking about what else Coach Spencer has in store. Heard plenty of rumblings in the off season that said Spencer was absolutely the man. Can't say I disagree at this point.

New punter and kickoff  man Kip Smith was great. 6 punts for 45 yards. Place kicker Ben Grogan struggled. His 49 yard field goal attempt was blocked and the news out of pregame warm ups was that he missed 4 FG's from 40 yards. We've been pretty spoiled over the last several years. Hopefully we can use the next 2 games to improve before we start Big 12 play.

Walsh was 18/27 for 135 yards, Chelf was 3/6 for 11 yards. So I know this is pretty obvious but 146 yards total passing is concerning. Perhaps it wasn't in the game plan, but I expected more. We've got guys named Stewart, Moore and Ateman - among others. On the bright side, Walsh was able to throw when he needed to. That 15 yard pass to Seales was a thing of beauty. Reminiscent of Blackmon. Let's hope that continues to grow.

Overall, an impressive victory against a middle of the road SEC team. Can't complain.