They love to be hated, and have their favorites. Arguably the worst officials in college football agreed to share some of their philosophies on bad officiating with Cowboys Ride For Free.

Those of you who frequent Twitter are familiar with one of our favorite parody accounts, @Big12Refs. 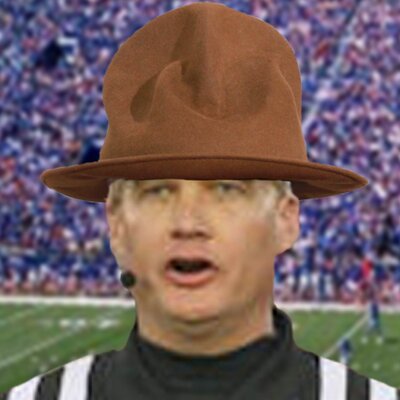 They (or he, she, it...whoever runs this thing. Hell, it might be Fake Dan Beebe in disguise for all we know) were kind enough to lend their wit and insight to one of our favorite things to hate besides OU...and Baylor...

Big 12 officiating. The untimely flag or "no call"...the official reviews...all make for stressful game days. We can't do anything about it, so we might as well have fun with it! Let's get moving...

Thanks again Big 12 Refs for helping to explain some of the nonsense we see on Saturdays.

"Thanks for the opportunity to explain our side of the story."

1. The Big 12 started in 1996, but it seems like you've only recently begun to make a name for yourselves. What prompted this new agenda?

"The 90s were a bit of a blur for us. We didn't realize Texas Tech was even in the conference until we ran into Mike Leach at a millennium party. To this day, we still don't know where we parked our car that night. Ended up having to buy a new one."

"Anyways, back to your question. We've felt a lot more confident in the past few years. When you have a leader as incompetent as Dan Beebe, you really feed off that. Bowlsby is more of a buzz kill, but we think he secretly hates Iowa State, too, so we just let it ride."

2. Do Big 12 refs have any kind of plan in place to prepare for the new College Football Playoff?

"Our usual bowl preparation is to spend a few weeks in Tijuana. We always end up coming back with less shoes than we started with, but that's a different story. For the playoff, we'll probably watch a few Tom Emanski instructional videos. It's not football, but that kind of genius shouldn't be limited to one sport."

"Bill Snyder and it's not even close. Does anyone else have a grandpa that keeps giving you stuff you don't need or want every time you visit so they don't have to keep it around for the estate sale? Bill Snyder is like that for us. Sure, he wears a few old windbreakers, but those are just a few of thousands. Who do you think gets all the rest? We have closets full. We don't donate them to Goodwill because that's the only place he shops and we're sure he'll notice. He's the wiliest of old coots."

4. What is your favorite "Buffalo Wild Wings let's put this game into overtime" move?

"We personally don't like overtime. We get paid by the game, not by the hour. You wouldn't think that by our speed (or lack thereof) with video reviews, but most of that time is spent swiping through Tinder. Sometimes, our microphone to the booth isn't even hooked up, so we covertly shake a magic 8 ball that broke years ago (in Tijuana)."

Wait, that wasn't a question. Sorry.

"No problem, we'll just respond with a random photo of one of our favorite moments..." 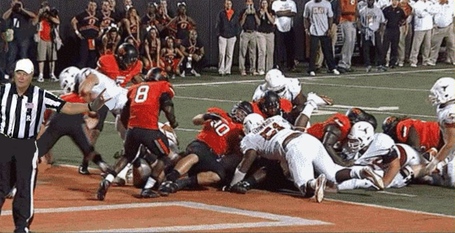 6. The field goal. You know which one. Was that Squinky or your staff? And that field goal was good, wasn't it?

"We honestly don't have any clue what you're talking about. You guys think we secretly plan all this stuff and file it all away in our memory bank. It ain't like that. Half our calls and signals are just trying to get the attention of cute girls in the crowd. Also, sometimes we throw flags to shoo away horseflies and mosquitos, then have to make something up to justify it. In 2007, we did an entire game without whistles -- it was a real challenge. That's when we found out that Memorial Stadium in Lincoln doesn't have a lost and found."

7. The aforementioned FG...the goal line non-fumble against Texas in 2012...the holding penalty that brought back Roland's 75 yd TD on the first play of 2013 Bedlam...OSU fans feel like they've been the brunt of your staff's most notable handy work. Which Big 12 school's fan base is the most fun to screw with and why?

"Iowa State. We don't give too much schtick to OSU, simply because T Boone once let us pretend we were his landscaping crew to get us out of a jam (Mexico, again, don't ask). Good guy, though, even if he smells like mothballs. But Cyclone fans are ridiculous. They boo everything. They'd boo the Pope booing Sinead O'Conner tearing up a picture of the Pope. Ever since Iowa was founded as a state in 1973, they've accomplished nothing, yet think they deserve things. We just don't get it. That said, we wish Fred Hoiberg would return our calls. The whole 'going through his garbage' thing was just a big misunderstanding."

Well that was definitely enlightening. Thanks again for your time.

"We hope that helps. Sorry it took us a while to respond, we're in Waco this week and they don't have the internet yet."