Oklahoma State: The Re-Emergence of the Packaged Play

An analysis to how the Cowboys have brought back packaged plays to aid a simple offense.

Share All sharing options for: Oklahoma State: The Re-Emergence of the Packaged Play

After a slow start, the Oklahoma State Cowboys rode a strong 3rd quarter and beat the Iowa State Cyclones by a 17 point margin. The Cowboys tried to keep it simple on offense, but this shouldn't be a surprise. Gundy himself has said on multiple occasions that the offense will be extremely simplistic this year. This leaves a question for this OSU offense: how can you have success with only a handful of plays?

I've seen junior varsity squads with more complicated playbooks than this team, but you can't just blame simplicity for a lack of offense. For example, Georgia Tech has a very small playbook; in fact, their head coach Paul Johnson calls plays from his own head without a play-sheet. Ole Miss is famous for using the same play multiple times in succession. Any Mike Leach team will run the mesh at least 5-6 times. For the Cowboys, repetitive play-calling has not been the only problem. Rather, the big problem was the plays that they were repeating. In the past, Oklahoma State used the wham play (which if you don't know what that is by this point, look at my past articles) multiple times a game, and it had only one possible outcome. Their favorite passing play (streaks with a slant), which we looked at last week, is extremely simplistic and does not have a whole lot of options. While they've had a bit trouble succeeding in a simple offense, it's slowly getting better. As of late, Oklahoma State has used a small amount of elaborate plays as opposed to a large amount of basic plays.

The Cowboys have found out how to always keep their receivers involved using packaged plays. The 2011 Weeden offense was essentially built off of the package play; Holgorsen created an effective offense by finding multiple ways of putting a targeted defender in a run-pass conflict. Every packaged play gives the quarterback an option to put the ball in a number of different places.

Some types are simple, like their outside zone and bubble. 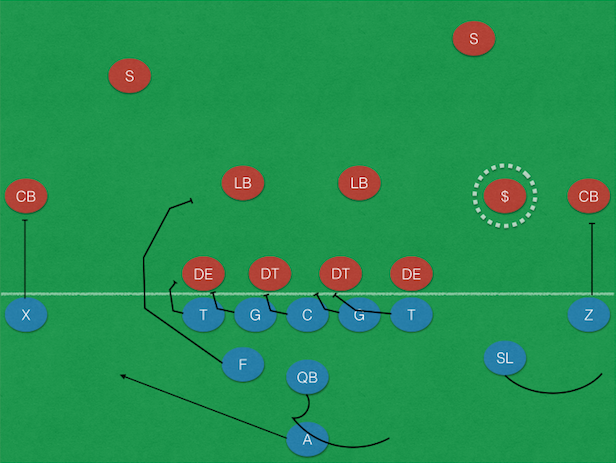 The quarterback has an option to either hand the ball off or throw it wide to the slot receiver.

Some are a little more elaborate, like their Y pop pass: 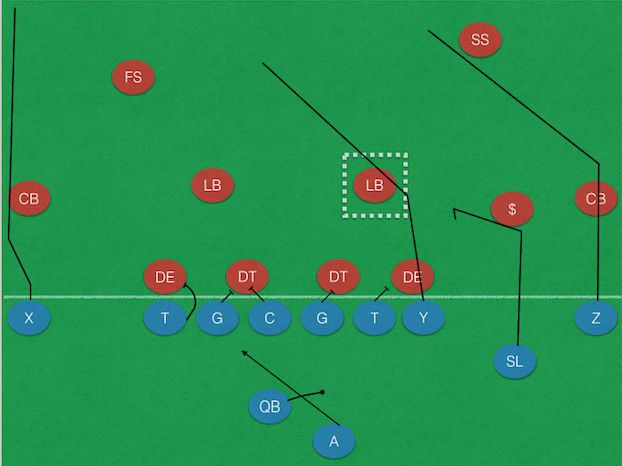 The quarterback has an option to hand the ball off, throw to the isolated "X" receiver, or pull the ball from the back's belly and throw to the tight end in the middle of the field.

They brought back the pop pass for the Iowa State game, although Daxx only went to the isolated receiver each time they ran it. Still, the play's many possible outcomes allow the offense to receive a boost without overcomplicating things. It also fits perfectly in Yursich's "if at first you don't succeed" philosophy.

If you watched the Pokes' offense in this game, you might have noticed that Garman took advantage of the built-in passes in their run plays. Along with these plays, the Cowboys have recently added a blast run play paired with passing routes on both sides. 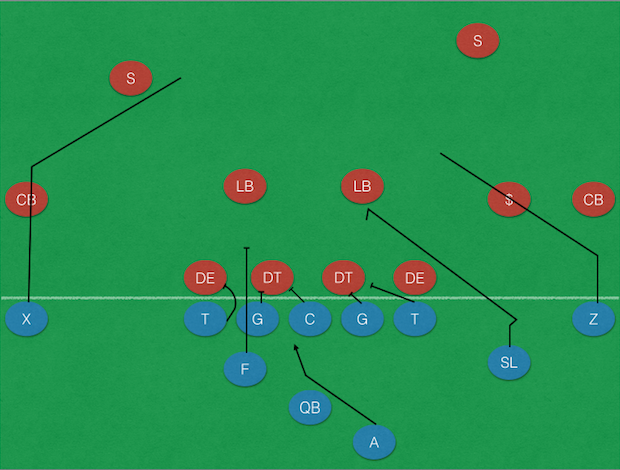 When he gets the proper blocking, Garman can do many things with this single play.

He can either hand it off:

The Cowboys can go to this one play and allow the defense dictate where the ball goes.

These are just some examples of the Pokes' packaged plays and how integral they are to this offense. Lets hope that the Pokes can perfect every intricacy of each packaged play before they get into the difficult part of their schedule. Unfortunately, I do not see any offensive philosophy changes in the future. Because of that, the only way that this offense can enhance its effectiveness is if the players continue to improve their execution in this vanilla scheme. Barring any unforeseen circumstances, the Kansas game should be a time to tinker offensively without any pressure. If they can perfect each of their packaged plays, the Cowboys can put together a nice little offense for themselves. Whether it will work against a top-tier defense, that is yet to be seen, but at this point, every score helps.

How do you think the Cowboys will do against a struggling Kansas team? Post your predictions below.