Did The Big 12 Refs Give Oklahoma State the Win Over Iowa State?

Did a controversial call in the first half of the game against Iowa State give Oklahoma State the win?

Share All sharing options for: Did The Big 12 Refs Give Oklahoma State the Win Over Iowa State?

If you're an Iowa State fan the game boiled down to one play. Right before the half the Cyclones stopped Desmond Roland just short of the goal line. Or so it seemed. Upon further review, and to the dismay of Iowa State fans, it was overturned.

First ruled short of the endzone, #OKState gets a TD after replay overturns the call. #IowaState

Right then and there the game ended for Cyclone fans. The fix was in. The Big 12 has it out for Iowa State, and they just aren't going to be allowed to win. Here's the Iowa State Athletic Director after the game.

Oklahoma State fans have seen their fair share of suspect moments, so we can empathize. Does Iowa State have a case?

Did the ball cross the goal line?

When I watched it live I couldn't believe it was ruled shot. I was looking down the goal line. After watching the replays though, it's much, much closer than I realized.

I did my best to lighten up the frame, and reduce the shadows to try and get a better view on the ball. I also extended the goal line to try and give a more decisive point of view.

I'm going to let majority rule whether or not it crossed, So be sure to vote in the poll below. 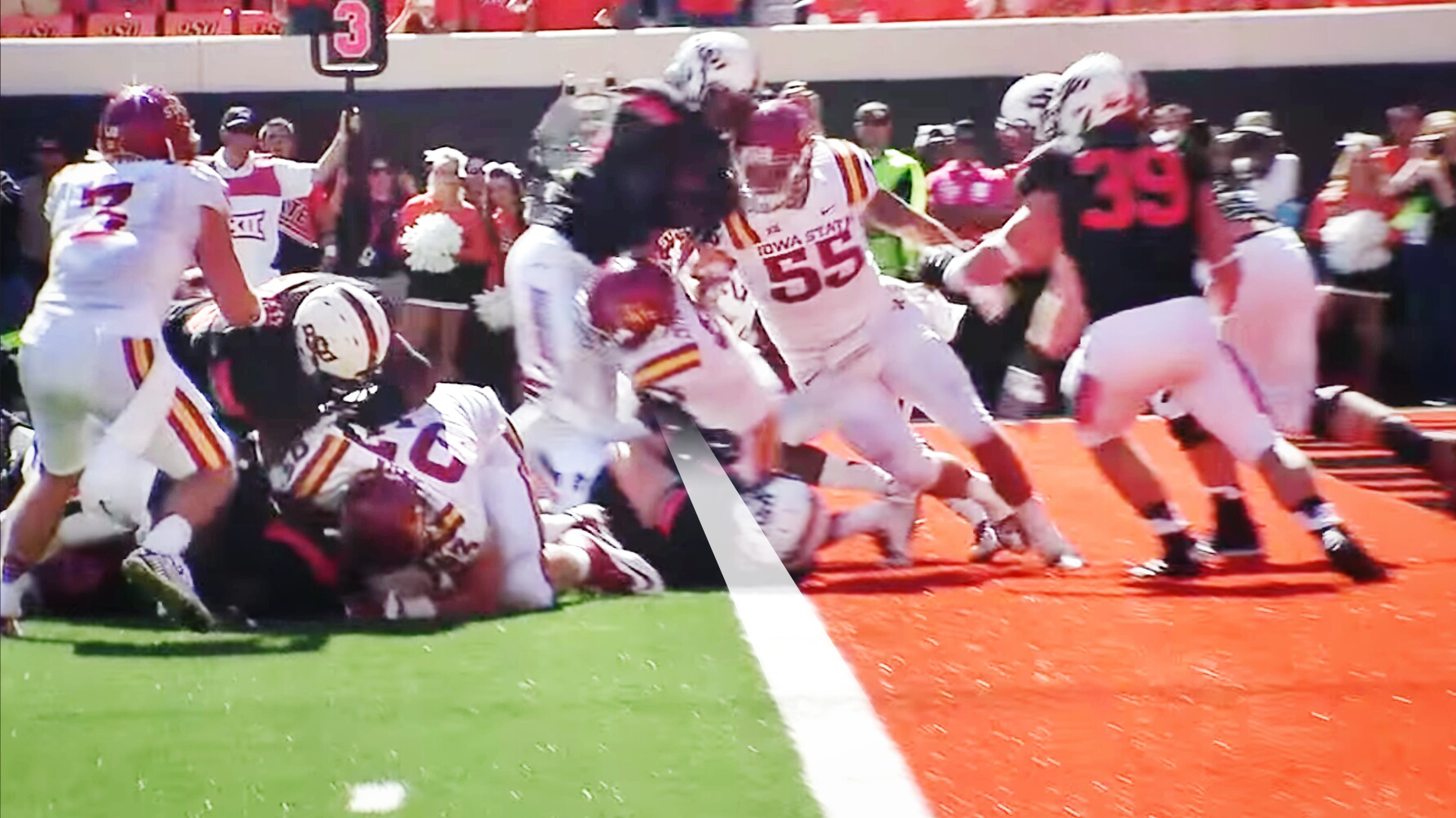 Should The Play Have Been Overturned?

There wasn't a single angle that showed a clear shot, and I had to use photoshop just to get the ambiguous shot above. That in itself should explain how ridiculous it was to overturn the call.

The call could have gone either way on the field, but you have to stick with that call.

Did The Controversial Review Cost Iowa State The Game?

Absolutely not. If you're going to give up because of an unfortunate call, you're never going to go far in this league. That starts with the leadership. It's up to the coaching staff to brush it off, and get the team ready for the second half.

Taking to the podium and pinning the game on a first half play says one thing, you were waiting for the shoe to drop. Iowa State was just waiting for the Cowboys to take over the game, and the bad call gave them the excuse they needed to give up. It's a mentality that starts with the top.

It was a bad call. It happens to every team. The Cyclones went into halftime down seven. If that's too much of a deficit to overcome in a half of football, then they really don't have any business winning football games. Six points and a offense that was struggling wasn't enough to demoralize the Cowboys, but seven points sent the Cyclones home? If that's the case, then the right team won the game.