Oklahoma State Chalk Talk: How to Use The Freek

A look at how the Cowboys have used Tyreek Hill in the past, and how they can add to that for the future

Share All sharing options for: Oklahoma State Chalk Talk: How to Use The Freek

Oklahoma State has one of the most electrifying players in the country on their roster. They've used him in the offense a good deal, but there is still a clamouring for designing this struggling offense around him. In this post, we will explore how OSU has used The Freek, as well as how other teams have used their own speedsters.

What They Did Right

OSU will occasionally add Hill into their pass progressions, and by doing so, it enhances the chances of a successful outcome (barring a sack). If you haven't figured it out already, Hill can be a weapon in the passing game coming out of the backfield. Take this angle route against the Seminoles as one example. 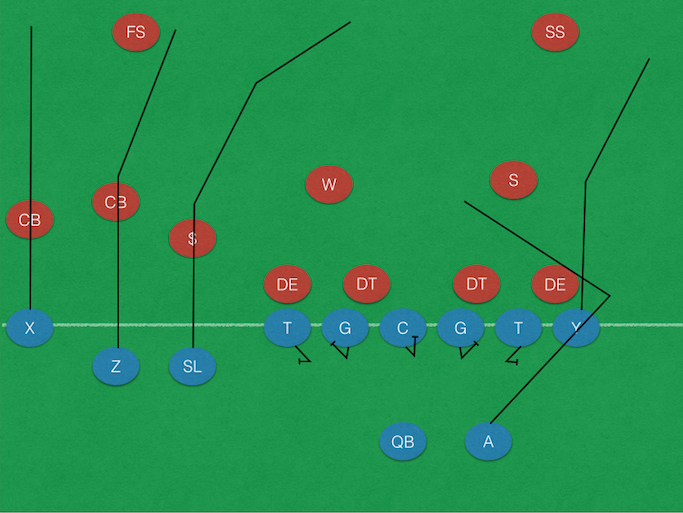 They expanded on this idea once again, successfully using this seam pattern against K-State. In a standard cover 2 look, even in zone, there will be an open space between the Mike backer and the free and strong safety. OSU takes advantage of this standard coverage by using Tyreek's speed from the backfield. Hill breaks upfield from his pre-snap position and beats the mike backer to open space, catching the ball between the safeties. The play went for a huge gain, eventually leading to a Cowboy touchdown. 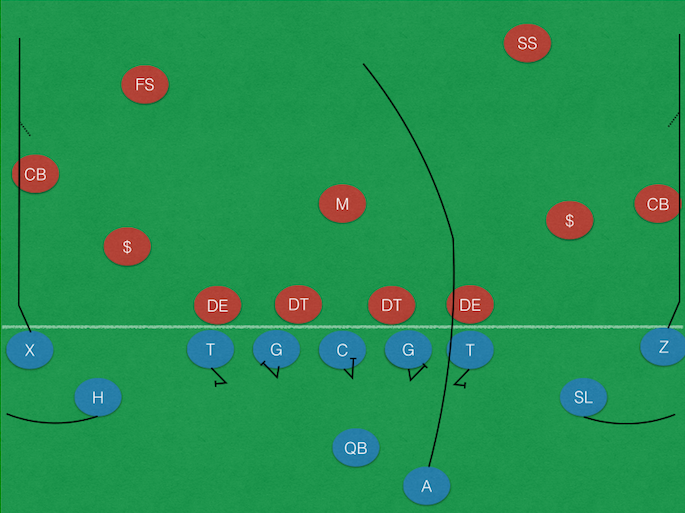 When the Cowboys have Hill run routes out of the backfield, they seem to have substantial success, as it creates a bind for the men in coverage. If you run a zone-beating concept with Hill running a man-beating route, your expectation is that if you catch the defense in man, Hill should be able to outrun any linebacker on his route. But, as this is OSU, they do not use a successful concept multiple times, for fear of having it actually work more than once. The Pokes used this concept one time against K-State, and then did not go back to it again.

If the Pokes can learn how to pass-block, they could have great success using Hill in more pass plays that work to his advantage. Imagine using Hill on another zone-beater, like OSU's shallow cross play:

If OSU put Hill as the receiver running across the formation on the drag route, it could make one of their staple plays so much more effective. If the defense is in zone, it is once again a hi-lo read, but if they're in man, they play is designed to be a clear out, leaving space for the dragging receiver coming toward the opposite sideline. I don't care who he's going up against, I would bet my money that Tyreek could outrun anybody going across the field like that.

Or how about a wheel concept. The wheel is a popular concept from the NFL all the way down to the little leagues, and for good reason. 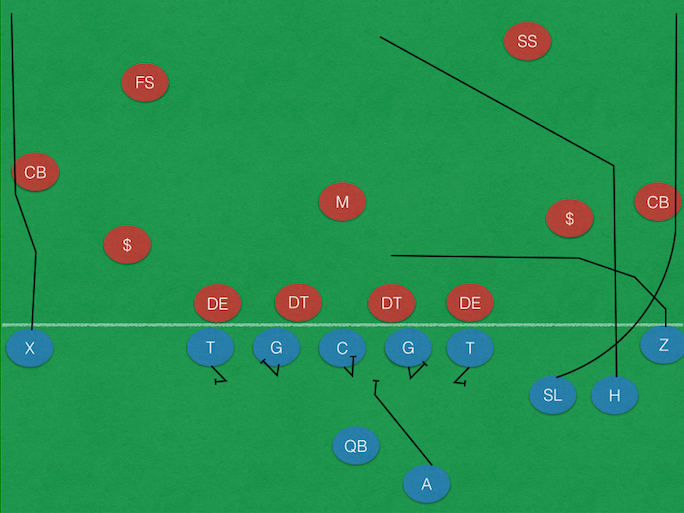 Can you picture Hill in that slot receiver position (SL), running full speed along the sideline? This play has so many possibilities, all of which are exciting. Unfortunately, the Pokes could never run this play, as it would require quite some time for the play to develop, and the way their O-line has been struggling, the last thing you want to do is run a five-step pass. Still, a man can dream, can't he?

What They Did Right

I do give the Pokes some credit for their gameplan against Kansas State. They decided to use 10 personnel exclusively, realizing that spread football can be effective for troubled offenses; unfortunately, it took them six weeks and three losses to figure it out.

They also added some new plays, like this nifty little toss play that was converted from their swing pass. 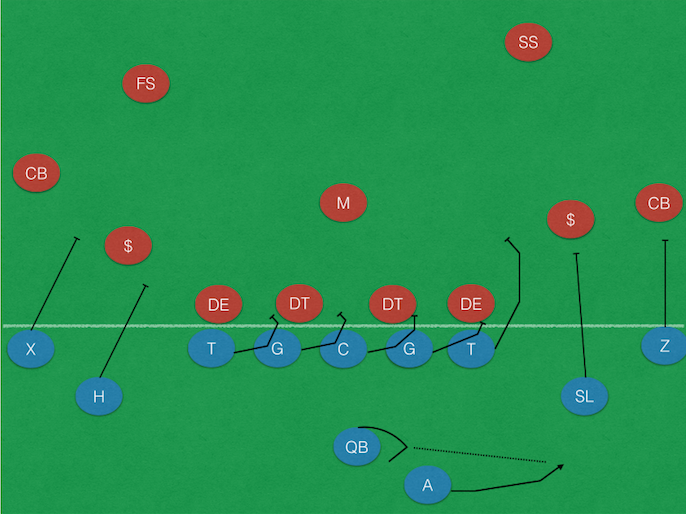 Sometimes when power isn't your strong suit, finesse works just as well. Hopefully they'll continue to use these spread-out formations, because I doubt that they'll be able to pound the football against a team like Texas.

They shouldn't be running Hill up the middle in formations like the full house, because they're pounding a 5'9" tailback into a clogged wall of bodies. We saw how that can end in catastrophe after the injury scare against the Wildcats two weeks ago. If you want to run him up the middle, at least open things up.

The Cowboys need to take a page from the Mountaineers 2012 playbook.

If you remember, WVU had exceptional success against the Sooners on the ground a couple of years ago, using Tavon Austin at the tailback position. The difference between what they did and what OSU does is that their coaching staff was smart about it. West Virginia didn't try a ground and pound scheme with their featured speedster; rather, they ran him up the middle, but out of spread-out, 10 personnel formations. That way, if they got a hat on a hat between the tackles, Austin was off to the races. 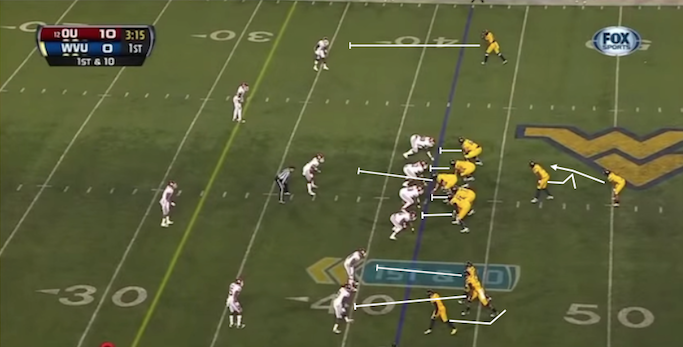 By using a simple packaged play out of 10 personnel, the Mountaineers open up space in the middle of the field. There are five lineman on five defenders upfront, leaving a very simple job for the offensive lineman - just block the man in front of you. No double teams, no pulling, no room for confusion - just block the man directly in front of you.

The 'Neers get a every defender accounted for, leaving open grass for Austin to shoot through.

Taking another look West Virginia, they effectively used Austin in their speed sweep series. The Pokes have experimented with the jet sweep a couple of times this year, but #1 half the time, they didn't even use Hill with it and #2 they didn't stick with it when it didn't work. Here, the Mountaineers block the play like an inside zone, and pitch it to Austin coming across the formation. The blocking scheme freezes the mike backer, allowing Austin time to get to the perimeter. (Note: technically this is a forward pass, but I'm still putting it in the running category.)

Not only does this give the offense a chance for success, but just by running it, it sets up for other plays later in the game. I know I've mentioned it before, but if you missed it the first time, be sure to watch this clip of the use of the speed sweep in WVU's offense.

The trick play possibilities with Tyreek are absolutely endless, and they just take a little bit of creativity from the offensive staff. Unfortunately, creativity is what the Pokes have been lacking all season long. Still, let's take a look at some of the ways other teams have used their speedsters.

You could use Tyreek in the Annexation of Puerto Rico, also known to non-Little Giants fans as "Hide the Midget". The play consists of hiding a skill player behind standing offensive lineman and sneakily handing him the ball off the edge, resembling the now-illegal fumblerooski play.

This play has been used across all forms of football, in both collegiate and professional games. Since the play has a sneaky behind-the-back handoff and not an actual fumble, this concept is now referred to as the bumarooski, which you can also see here.

Oklahoma State has used the end around occasionally, but enigmatically enough, they have not used Hill with it at all. They've tried a reverse to James Washington and an end around to Shepard, but not with the fastest player on their team. This may be because they don't want to give away their hand to where the ball is going, but that's only speculation.

If OSU really wanted to, they could add this as a staple of their offense, combining the concept with a nice little package of plays. A team like UTSA uses this quite a bit, either faking to the outside and handing it off inside, faking inside and handing it off wide, or throwing a pass off of a similar fake.

Finally, this post would not be complete without at least mentioning the Wildcat. What would it even be called at OSU? The Wild Freek? The Hillcat? Either way, it would be something new and different, which is what the Cowboys desperately need at this point. 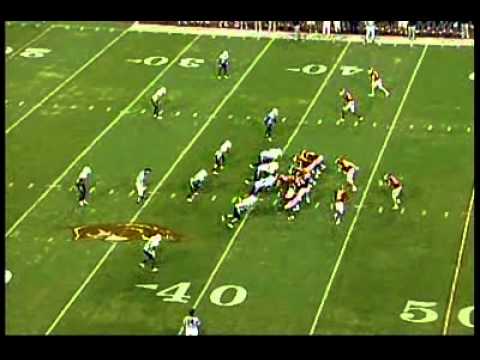 Imagine the possible damage of putting Roland behind center and jetting Hill across in motion. The Pokes could create a similar tandem of Mcfadden and Jones at Arkansas, which gave defenses fits for multiple years. Look at some Wildcat formation cut-ups here to see its potential. Still, can you even imagine that potential with one of the fastest players in the country? It's enough to make a grown man cry.

How would you use Tyreek in your offense? Write your answers in the comments below.