Oklahoma State Chalk Talk: It's No Longer All on the Coaches

A look at some of the new concepts that OSU used to help boost their offense, and how the players stopped it from working.

Share All sharing options for: Oklahoma State Chalk Talk: It's No Longer All on the Coaches

First six games of the season: 37 Points Per Game

That says it all, folks.

If you watched the OSU-Texas game from afar, the Cowboys' game-plan would have gotten lost in the puddle of mediocrity that was their 28-7 loss. If you looked a little closer, though, you could have seen that, surprisingly, the Cowboys had a decent game plan. One of this offense's biggest criticisms was a lack of innovation, but after watching the Texas game, it seemed to have gotten a bit better. I'm not saying that their play-calling was perfect, but it was a step up from what I've seen in the past. They usually trot out the same mediocre offense every week, to no avail. While adding some new plays are just a cover-up rather than solving the problem (which would take an entire offseason), just the fact that there was something new there, even in a loss, can be the slightest bit encouraging. Unfortunately, as the play-calling efforts have slowly improved, the performance of the players have rapidly declined. In this post, we will look at some of the Pokes' new plays that they used against the Longhorns, and why player error negated their potential success.

The first thing that the Pokes showed was some new pre-snap movement, bringing a slot receiver into the backfield in what is referred to as a "rip" or "liz" motion. 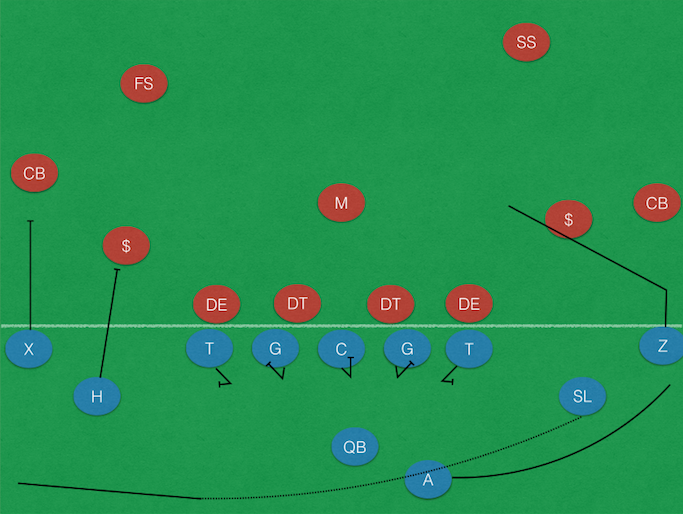 The first time they used it, they had a swing screen set up on the play-side and a slant-flat combination on the back-side. When the slot receiver came in motion, the secondary rolled towards the motion, opening up for the slant on the opposite part of the field. Garman made the right decision throwing to the slant, but the ball went right through Shepard's hands, leading to an incompletion and an eventual punt.

The second time they used this motion, they were trying to run a misdirection screen away from the motion side. By using grouped play-calling, the screen was perfectly set up, as the defense had already seen the motion and thought that they knew what to expect. Unfortunately, Garman did not give time to let the slip screen develop, and instead opted to throw to the swing. Keep in mind that this was on a third and long, and he had a much better chance of moving the chains on the slip screen as he did on the swing. Because Garman made the incorrect decision, the swinging receiver caught the ball and was quickly tackled for a loss, ending in a subsequent punt. I give kudos to the coaching staff for using this concept, but I quickly take those kudos away considering that they never went back to this play. 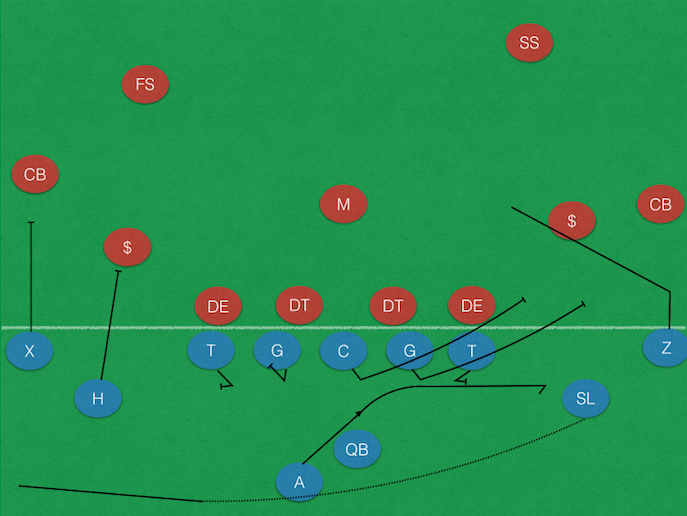 The Cowboys featured a bunch formation multiple times in the game, which I have never seen them use. I've always been a fan of the bunch, as it has a plethora of quick passes and rub routes at its disposal, and I applaud the team for finally trying something new. Sadly, it doesn't matter how good the concept is if the lineman can't block. 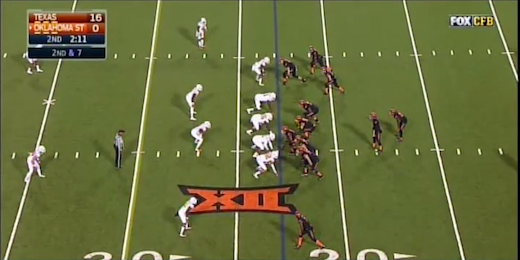 The Pokes used some great concepts out of the formation, but every time they used it, Garman either got pressured or sacked in a matter of seconds. 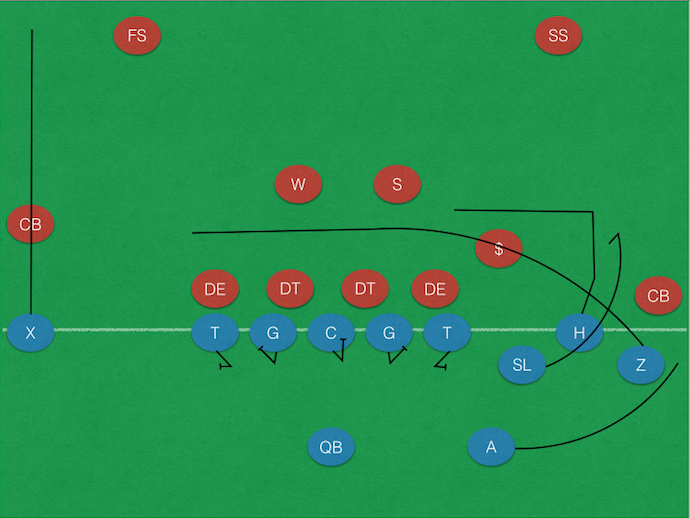 At one time, they tried to use a quick drive concept (above), but Daxx literally had less than two seconds to get the ball out, and there was only a four man rush. The play ended in a sack, as that seems to be the Cowboys' favorite play.

They also used the bunch on a wheel route twice, one ending in an incompletion and one with a sack. If you remember last week, I mentioned the possibility of them using a wheel route with Tyreek being the wheel-man. Both times the Pokes used this play, they had a man open, but the first time Garman had no time, and the second time he opted to throw to the isolated receiver, ignoring the route concept to the bunch side. 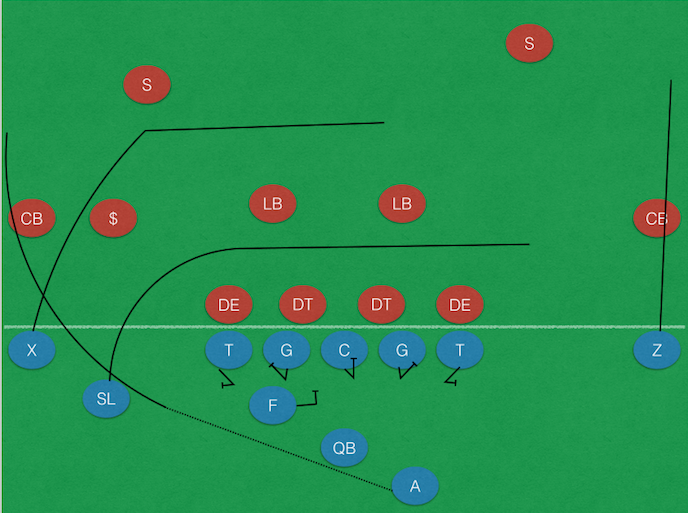 In addition to the second play that we mentioned, the Cowboys added some additional screen packages into their offense. While they were fairly solid play designs, for one reason or another, they couldn't find any success with them. 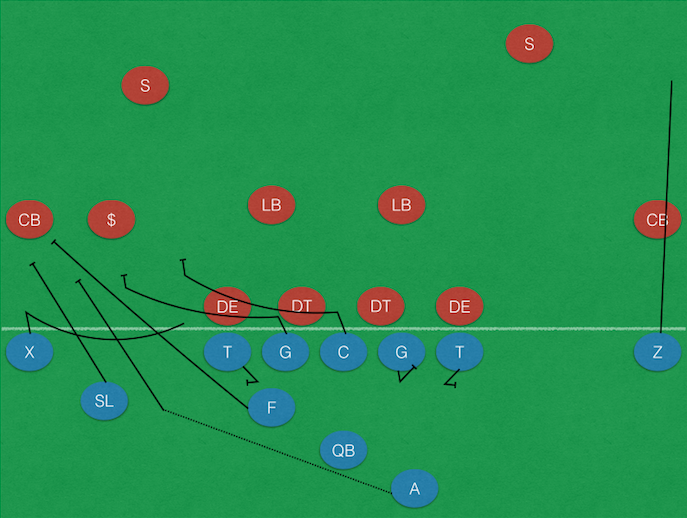 They tried a tunnel off of the same motion they used for the wheel route, but Garman held on a tad too long, giving the defense time to shut down the play.

He also made a bad throw on an attempt of this tunnel screen early in the third. 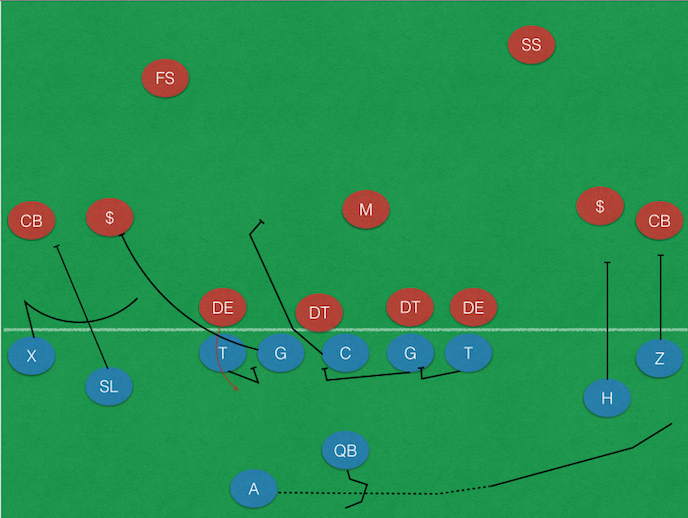 Also, you must remember that Texas' defense is no snub, and there were occasions when they simply read the play well, like when OSU tried to run the play below. 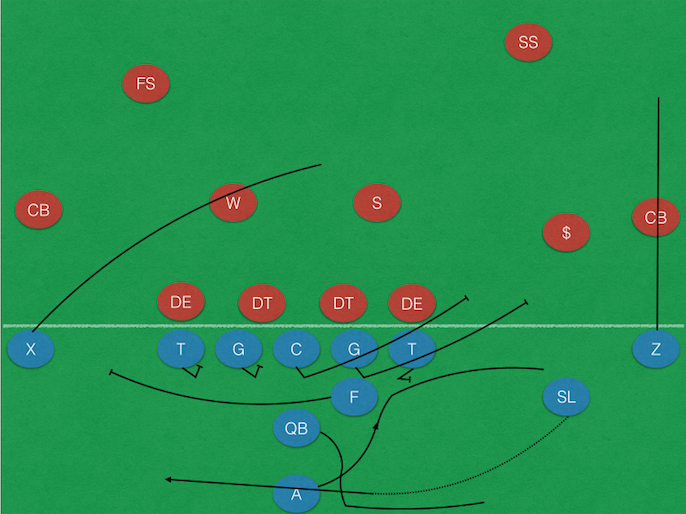 Now, not all of the Cowboys' new concepts ended in failure. They actually used a new sprint-out play, coming right off the heels of our sprint-out discussion two weeks ago. 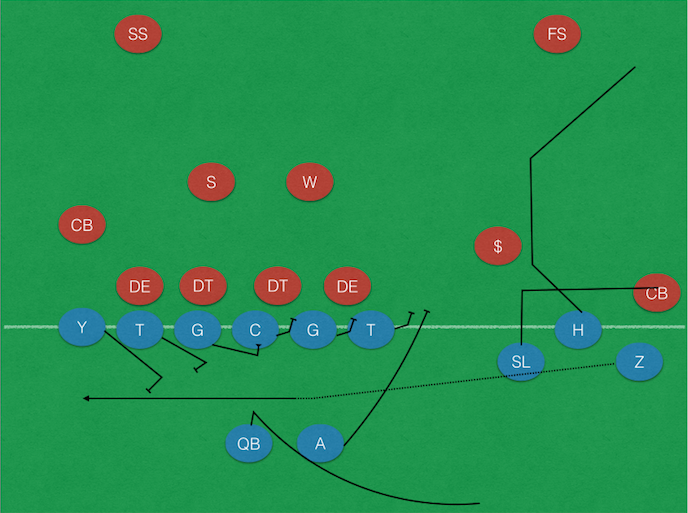 This play sparked them to their only touchdown of the night, coming in the mid fourth quarter. After they ran this play, they quickly lined up and ran the counter to the same look by actually pitching it to the jet man motioning across the formation. 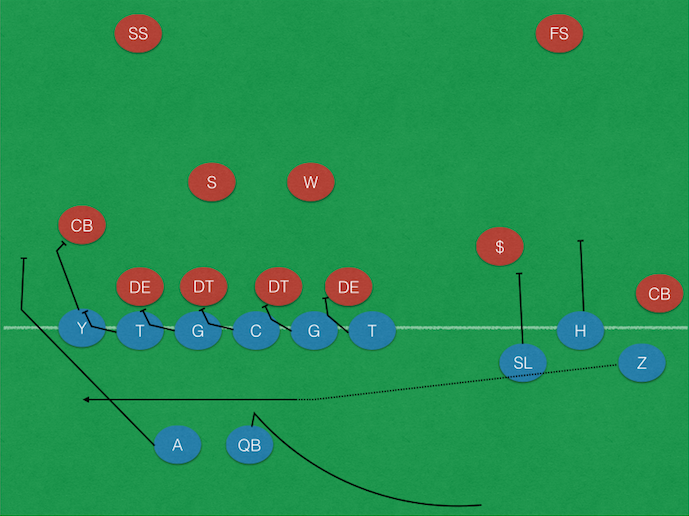 These were the two most successful new plays that OSU used, as they have never used those concepts in this formation before. My question is, why did it take you three and-a-half quarters and half an empty stadium to make you realize that you should maybe be using it? Why didn't you pull this out earlier, as opposed to waiting until it was almost garbage time to pull it out? Don't get me wrong, I'm grateful that they used it for a touchdown, as a shutout would have ruined me, but goodness people, get some sense of timing.

Well, there's no doubt that it's been a dark couple of weeks in Stillwater, but my criticism is no longer 100% on the coaches. The talk of a bland offense isn't as valid is it once was, and now the criticism shifts slowly towards the performance of the players. Don't get me wrong, it's also the coaches job to keep the players on a steady path of improvement, but the kids have to do their part as well. It's also not just one problem that is holding this team back, it's multiple things. The coaches, yes, but also the offensive line, the quarterback, the receivers- they all have their own problems. From an outside perspective, this Cowboy squad seems to have given up at this point, and it's going to take some time until everything is back to where it needs to be.