A look at the Cowboys' gameplan against the Baylor Bears, and how it was a solid mix of old and new.

Share All sharing options for: Oklahoma State Chalk Talk: Do I Sense...Improvement?

Early on, the criticism of this offense was that it was too stagnant, having no innovation or change from week to week. Well, as we talked about last time, this seems to be improving by the game (although it's unfortunate that it took this long to change things). The Cowboys' Baylor gameplan was not bad by any means, and if they had a better offensive line, I firmly believe that they would have been in it 'till the very end. Don't get me wrong, it was by no means perfect, as they seem to stay predicable on third downs and occasionally forget that they have one of the most electrifying players in college football. Additionally, they always have a handful of plays every game that make the entire OSU fanbase facepalm in unison. But there is still much reason to rejoice, as this was miles better than the crap that we've seen in the past. In today's post, we will look at the Pokes' gameplan, as well as what they used - some old stuff, some new, and some in between.

The Pokes used the bootleg a good handful of times, which has been a staple of this offense even back to the Robinson Era. They used it out of the wing and the strong slot, and although Rudolph threw an interception on this play late in the game, this is a relatively safe play, as it gives the quarterback an easy progression. 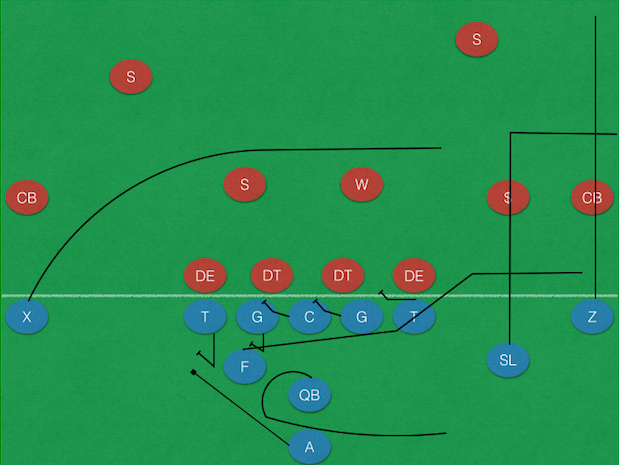 The quarterback looks to the flat, then to the deep out, then to the back-side cross. If neither of those are open, he pulls it and gets upfield. Not only is the play efficient, It also fits well as a counter to their outside zone and wham play, which they previously ran almost to the point of insanity.

The Cowboys have used the pass off of their wham action for quite a while now. The've ran the wham play itself since Yurcich came here, and their pass off of it has had varying amounts of success. 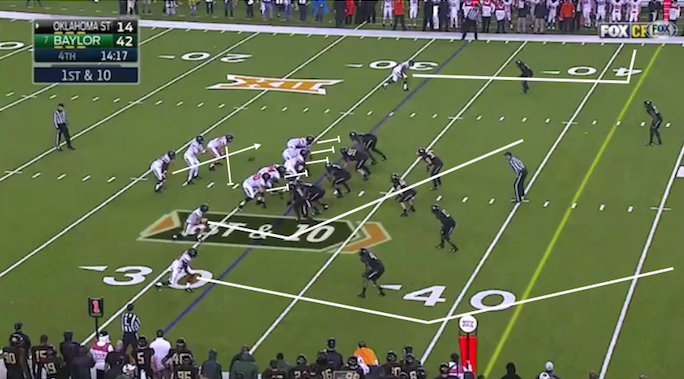 Here, they run that play and steal a quick one against the Bears. This is just a testament to the magical things that can happen when your quarterback isn't getting driven to the ground.

The Cowboys finally added a sprint-out passing game, featuring the concept twice. Unfortunately, one of the plays ended in an interception, but just the fact that they're trying something new is extremely encouraging.

Their most notable sprint-out was a spot route, coincidentally the same route we talked about a couple of weeks ago. This concept is extremely efficient, as the spot route is known as an adjustable concept, meaning that it can adjust to either man and zone. 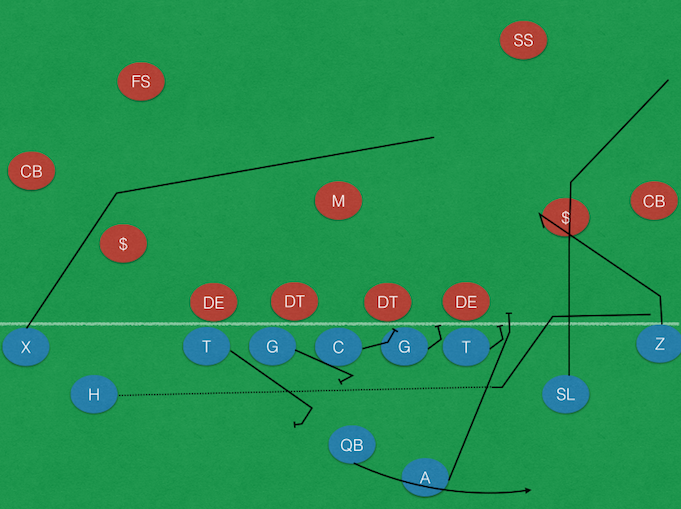 The play is meant to work against zone, as it overloads one spot of the field (that's not why they call it a spot route). If it's in man, the "Z" receiver rubs himself on the defender covering the flat receiver, giving him a bit of separation. If all of those are covered, the quarterback can take off, as he is already on the move. I'm going to be honest, when they ran this play, a tear almost came to my eye. I'm not ashamed, as many other fans got emotional with the Pokes' encouraging performance.

They scored a TD!!! I cried!! pic.twitter.com/aWK2JfjeOD

The double china route is extremely popular in the red zone, at both collegiate and professional levels. It is also another adjustable concept, working against both man and zone. 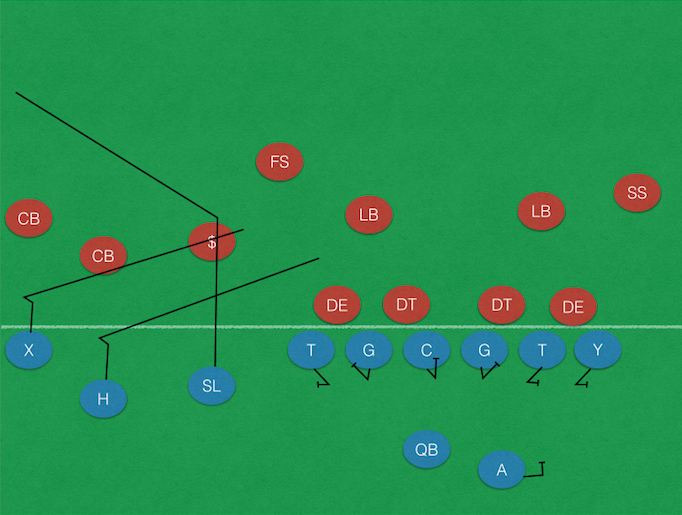 If the defense is in zone, the two under routes (also known as china routes) suck the flat defenders underneath, leaving the slot receiver one-on-one with a lot of open space to work with. Against man, it's the same deal with him being one-on-one, and the quarterback just lobs it to the corner, expecting the receiver to beat his defender to the ball in open space. This play also has a special coincidence, but it has to do with last year's Bedlam game, so I won't talk about it.

The Pokes have used this curl slant combination many times; in fact, it's one of the route combinations that the receivers run through before every game. In this play, they motioned a tight end across the formation creating a trips set to the far side. They ran the slant-curl, but this time, they had Glidden run a corner route, creating a smash route conceptwith Glidden and Ateman. 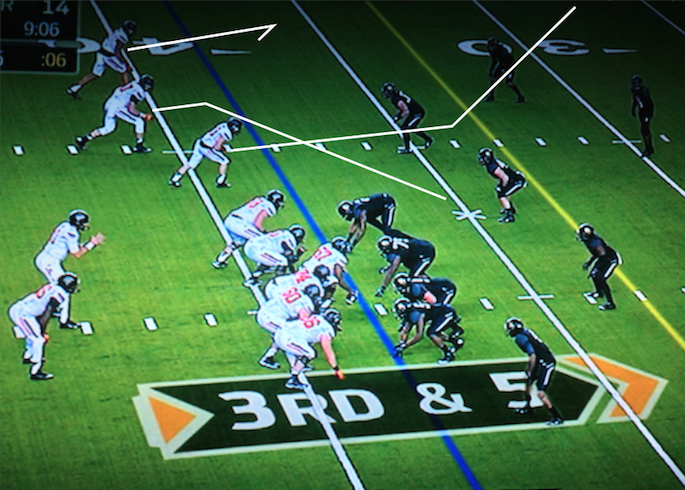 That terminology might sound like a bunch of burble to some. Still, you still can't argue with the result, and that's what really matters.

Ever since its creation, the fly sweep has been a staple of the air-raid offense. Dana installed it here during his tenure at Oklahoma State, and we've seen it used on and off ever since. The Cowboys used it once again versus Baylor, but did something a bit different with it.

Take a look at this formation below. Notice anything unusual? 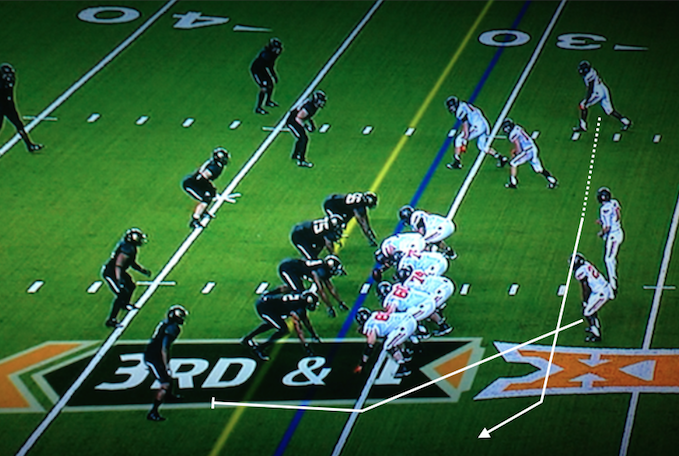 If you look closely, you can see that it is a tackle over formation. They took the right tackle and moved him over to the left side, putting four offensive lineman to one side of the center. 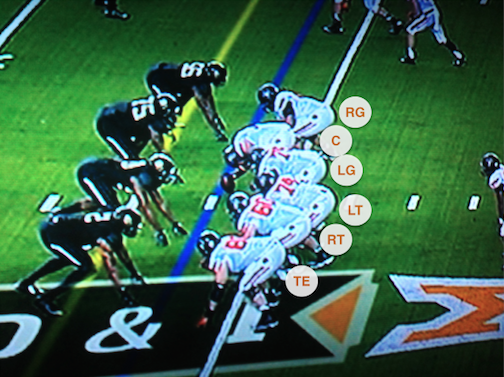 The play didn't get much, but man was this an interesting wrinkle from the coaches. My only question is, why aren't they flipping it to Hill instead of Washington? Is it because they're too afraid to give away their hand? If that's the case, create some grouped play-calls, maybe having an inside zone off of the jet fake to keep the defense honest. An outside threat can open up for the inside run game, and vice versa.

Well that's it for today. There were plenty of other things that we didn't get to, but I'm sure that you have other important things to get to (as do I). If you take away one thing from this post, let it be that this staff is trying, surprisingly. Last week, I thought that they just added some new plays here and there to cover up the real problem, like putting new headlights on a broken down car. From what I saw this past Saturday, they seemed to have a fairly good flow of variety. The Baylor game was one of the first instances this season when the offense actually clicked, with the playcalling and the execution (for the most part) working in tandem. Unfortunately, while the line performed better this week, they continue to be the limiting factors for this Cowboy offense. But have faith, Cowboy fans, because there is a light at the end of the tunnel. With another year under their belt, along with some improvement along the offensive front, this 2015 team's potential is looking bright. It is important, my fellow Cowboys, to not only remember where this team has been, but where this team is going, and this game was certainly cause for hope.