Remember the BCS when we used to argue about just one team being left out. Now the CFB Playoff is here, two teams are left out, and a conference gets the shaft. Much better.

Share All sharing options for: The College Football Playoff Selection Committee Has Failed

They had one job. One. Select the four best teams in the country to play for the National Title. No rules, no restrictions, just pick the best four teams. The task could not have been clearer, yet somehow the Playoff Selection Committee found it to be too monumental.

Take a look at this chart showing ESPN's Conference Power Rankings, and with an open mind, who would you pick? 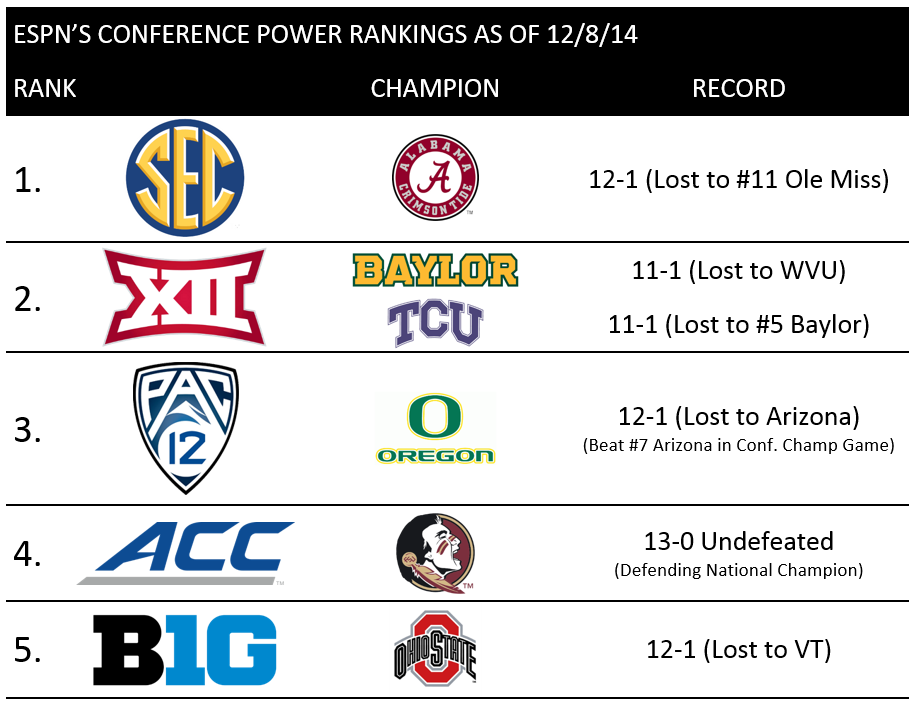 If we take the who-won-what-game-the-very-last-week out of it and look at everyone's resume objectively, there's only one discussion to be had. Which Big 12 team do you pick?

Two down, two to go.

Let's just get Florida State out of the way here. They're the undefeated defending National Champion. It doesn't matter the the ACC is only the 4th strongest conference. The 'Noles should be in.

So now it's between the Big 12 and the Big Ten. As the 2nd best conference in the land, the Big 12 Conference should be represented. TCU has the best loss of any of the six teams, but that loss came at the hands of Baylor.

That's the four, the only decision to be had is which Big 12 team. It's a tough decision, but you make it, and explain why you made it.

So who did the Selection Committee pick? Well, as you know, we already know...

How in the world did the school in the weakest conference, and with the worst loss of all six teams, get in the playoff above either Big 12 schools? Because they manhandled Wisconsin? When a score is that lopsided, it says more about Wisconsin being overrated than anything else. It's a good win by Ohio State, but it's one win.

Looking at just  FPI rankings the Big 12 is bumped to third overall, but it doesn't really matter since we are all in agreement Alabama, and Oregon deserve a spot. However, even with dropping one spot, the Big 12 is nearly 10 points better than the Big Ten.

Further still, the oddsmakers in Vegas have said both Baylor and TCU would be favored over Ohio State.

It was a perfect storm of having six teams deserving, but that's not a reason to excuse the committee, if anything it's a reason to condemn the process. If it was a clear cut, 'these four teams belong' we wouldn't need the committee. They had one job, and they failed. Not because I don't like who they selected, but because it it took exactly one season to strip away any and all credibility.

Instead of doing the job they were tasked with, they said, 'uh, the Big 12 didn't make the decision for us, so we skipped them'.  At that point you're no longer making an unbiased decision on the four best teams.

We were told back in April that holding conference schedules against teams wouldn't happen.

"The committee will not be in the business of dictating to conferences their scheduling,"  said Playoff executive director Bill Hancock

Now, I think we are all in agreement that the Big 12's 'One True Champion' campaign is just embarrassing, and something needs to change, but hear me out. It was the selection committee, not the Big 12, tasked with finding the best four teams. There is no NCAA rule that says the Big 12 Conference has to crown one team as sole champion, and furthermore it's the NCAA that's actually keeping the Big 12 from having a championship game.

We were promised a committee that would be free of bias, and they'd objectively find the four best teams. Unfortunately, that's not what we got.

If the Big 12 wants to be treated fairly the conference needs to expand, and it's absolutely ridiculous that it's come to that. I'm not against expansion, but to say the Big 12 needs to add two teams to be taken seriously is ludicrous. They aren't exactly going to be adding Alabama to the conference, and the Big 12 already has one of the stronger conference schedules as shown above. If it's about adding two weaker schools just to get to twelve teams, then why is everyone making a fuss about a weak non-conference schedule? Weak teams are weak teams, in or out of the conference. Everyone can give Baylor all the flack in the world, but the Bears weren't playing Western Carolina in week 13.

Bias wasn't supposed to be a factor, but it was. The College Football Playoff Committee has failed.