An Offense in Review Pt.2: Yurcich - Stay or Go?

With so many unanswered questions regarding the Cowboys' offense, we ask ourselves the million dollar question - should Yurcich come back next year or not?

Share All sharing options for: An Offense in Review Pt.2: Yurcich - Stay or Go?

I've got a little bit of speculation for you, and this might sound crazy. Now he's no Malzahn, but I think there's at least a possibility that Yurcich is a decent offensive mind. Hear me out - do you remember what Gundy said when Yurcich first came here? He said "Mike will come here and learn our offense". Now when Gundy said "our offense", we all assumed that he was referring to the spread offense that they ran the year prior (in 2012). But what if the offense that Gundy was referring to was not that offense, but rather the offense they have ran since 2013, which has received its fair share of criticism. Let me rephrase that - what if the Cowboys' current offense was not implemented by Yurcich, but rather by someone already in the OSU program? So when Gundy said that Yurcich will run "their offense", he was referring to this current scheme, which was already in place. That would mean that some of the blame that was initially put on Yurcich for bringing this offense would have to be shifted to whoever created it. This could be any one of the coaches there at the time, and there's no way of us knowing. To pair with that theory, there is a possibility that Gundy hired Yurcich from Shippensburg with no intent of having Yurcich bring anything schematically to OSU. In other words, did Gundy hire him to be a puppet, for lack of a better term.

If this was correct, and Yurcich has been calling someone else's plays the whole time, then would some of the play-calling blame shift? Would you not criticize him as much (since he didn't have much schematically to work with)? Or would you still give him flak for his poor sense of what plays to call when. For those who agreed with the latter, isn't there a possibility that he was he told to call conservatively, and some of his more questionable play-calls were because he was instructed to do so (e.g. running on every third-and-long)? Now, obviously the offense has improved exponentially in the past couple of games, but let us remember how bad it was earlier this season. Was that Yurcich's offense or someone else's? Or both?

Let's remember that Oklahoma State's offense looked much, much better against Baylor and OU, from the play-calling to the players’ performance. They added a good amount of new plays, as written about in last week’s post. But this now brings on the question of who added these new plays. All of the concepts that we talked about, the sprint-out passing game, the new formations, the altered route combinations - whose plays were those? Were they Gundy’s? Were they Yurcich’s? Were they a group effort? If it was Gundy, then he must have finally changed his tune at least a little bit, since he originally stated that they’re not going to change things. On the other hand, it would make sense considering that he has stated that he’s had more of a hand in the offense as of late. There's no question that he's an exceptional offensive mind, but he referring to player development, or the offense itself? If it was Yurcich, then that would rule out the puppet theory, because that would mean the guy can actually coach from an X and O’s standpoint. If it was a group effort, or if it came from a specific assistant coach (Jason Ray, Jemal Singleton, etc), then someone needs to be promoted. Regardless of the actual answer, why did it take them this long to add things? They added way much more than they ever have in this entire season in the past two games, but why? Where was this in the Kansas game? Where was this in the WVU game? Was it because they didn't believe it would do any good? Did they not have enough confidence in the team? You could make the argument that they’ve been consistently adding things week-to-week, but I have a feeling that both the media and the fan-base would disagree.

When Yurcich was announced coordinator, I immediately did research on this guy - there must have been some reason for Gundy to hire a relatively unknown coach from the D-II ranks. At the time, the Shippensburg Red Raiders had one of the most electric offenses in D-II, but how much of that was because of Yurcich?

When I watched the little Shippensburg tape that I could find, I saw an entirely different offense than what Yurcich initially ran at OSU. The team used multiple staples of the spread scheme, which was encouraging, and I thought that it would be a great fit for Oklahoma State. In hindsight, one could make the argument that either A) Yurcich just profited from a super-talented team or B) the scheme that the team was using wasn’t even his and he was just calling the plays. So the question is, how much of Shippensburg’s success was Yurcich and how much of that was the talent around him?

I have talked to some people who believe that the Raiders’ success was not because of him, but rather because of the players around him. There’s no question that their squad had a slew of talent during his time there. Their record-setting 2012 season was extra special, led by then-Junior quarterback Zach Zulli, who won the D-II equivalent to the Heisman in December of 2012.

That team was just plain magical. There were only two occasions in that 13-game season where their offense failed to score over 35 points. They averaged 531 yards per game, and they were a heavy tempo team, averaging an upwards of 80 plays per game as well. That's something to think about - Yurcich is a huge advocate for tempo. The fact that OSU has not used tempo consistently since 2012 could be a tell that Yurcich doesn't have as much control over the offense as we initially thought.

Looking at the Raiders, there is a strong case to be made suggesting that Yurcich did in fact have an impact. Obviously, there were other factors that affected each season’s outcome, but one could not help but assume that Yurcich had at least a small part in their success. Take a look at the graph and see if you can make any connections: 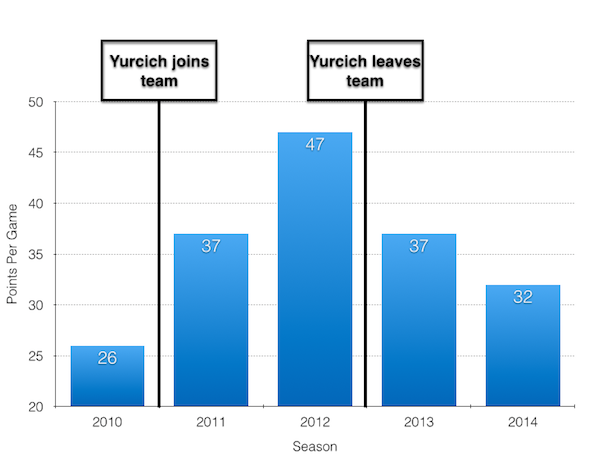 The offense takes a huge leap during Yurcich's tenure there, and coincidentally, it starts to decline once he leaves, even though they still had Zulli for his Senior season in 2013. Whether or not their change in numbers was because of him is up to the individual, but there is evidence that the guy can coach.

So using the information presented to you, should Yurcich stay? The Cowboys' offense has been on the rise, but will it keep improving? Will we see fireworks in the bowl game, or will they revert to their old feeble habits? The hope is that the offense can get back to its old ways next year, but there will be a lot of unknowns headed into the offseason. The question is, will Yurcich be back? Should he be back? What do you think?