An Offense in Review pt.1: Has Gundy Limited this Offense?

In place of the usual Chalk Talk segment, today we'll talk about the Cowboys' offense from a coaching perspectives, and ask ourselves why it's taken this long to start improving. Finally, does Mike Gundy deserve some of the blame?

Share All sharing options for: An Offense in Review pt.1: Has Gundy Limited this Offense?

As of late, the Oklahoma State offense has seemed to progress little by little. But as the season is coming to a close, with the looming possibility that the Cowboys might not go to a bowl game, we will look at the offense's success (or lack thereof) as a whole. Today, were going to focus on the coaches more than the actual players, and their effect on this offense. Here's the deal - the schemes are flawed, and someone in the coaching staff is reluctant to add anything new. The question here is why.

If you have watched any recent press conference, both Yurcich and Gundy have said multiple times that they need to keep with their base plays so that they can improve on them. When they say that, it makes it seem like their only problem is that they’re not grasping the offense yet, like the scheme is quite intricate and it takes time to learn. The truth is, their base plays are extremely simplistic. The reality is that when their plays don’t work, its simply because the lineman didn’t block, not because they were too complicated. So saying something on the lines of "well let’s just keep running it and maybe it will get better" isn’t completely rational, because it’s not a matter of the players learning the scheme, it’s just a matter of the players getting better, and that's solved in the category of player development, not in the category of schematics. Conversely, when the plays do occasionally work, as evidenced by pieces of the Baylor game, it’s not because the players have finally grasped the offense. Not at all. It’s simply because they blocked well on that particular play, so don’t hand out any praise to Gundy for sticking with the offense, because sometimes the offensive line blocks well, sometimes they don’t. With OSU’s current offense, that’s what makes a play succeed, not if the scheme is good or not, and that's why they had more success at Baylor than they have in the past.

Additionally, they keep using the same personnel, having a tight end or fullback on the field most of the time. That's all well and good, but it brings an extra linebacker into the box. They've fallen in love with the inside running game, but they haven't had too much success, as things tend to get cluttered. They still don't run out of 10 personnel frequently, which would help since there are less bodies in the box. That's another example of sticking with the same stuff over and over, not only with the same plays, but with the same personnel packages.

One could make the argument that maybe the coaching staff is just trying to make it easy on the players so that they can focus on their development and not be bombarded by a playbook full of 400 plays. There's only one problem here: the added a slew of new concepts during both the Baylor and the Texas game. To the happiness of many, they actually worked! Unfortunately, they seem to be added as an alternative to changing their entire scheme, simply as a quick supplement, so for the topic of base plays for this post, we are back to square one.

Repetition is good, I agree with that. What I don't agree with, however, are the plays that they are repeating, as in what they call their "base" concepts. The Cowboys’ scheme itself is poor. Many of their concepts are extremely limited, and there is usually only one outcome to where the ball can go. This is troubling because when the defense stops your first option, you’re stuck with an unsuccessful play. The plays that they should replace those with are the slightly more intricate concepts that give their offense a chance to succeed. I'm referring to packaged plays in particular, which OSU uses here and there. Even if they mastered two or three solid packaged plays (in a personnel that fits this offense), it would increase the team's offensive effectiveness exponentially. I have said this a billion times but the Cowboys keep making it relevant - it's not the fact that they repeat the same plays that is aggravating; rather, it's the actual plays that they're using that causes this frustration. 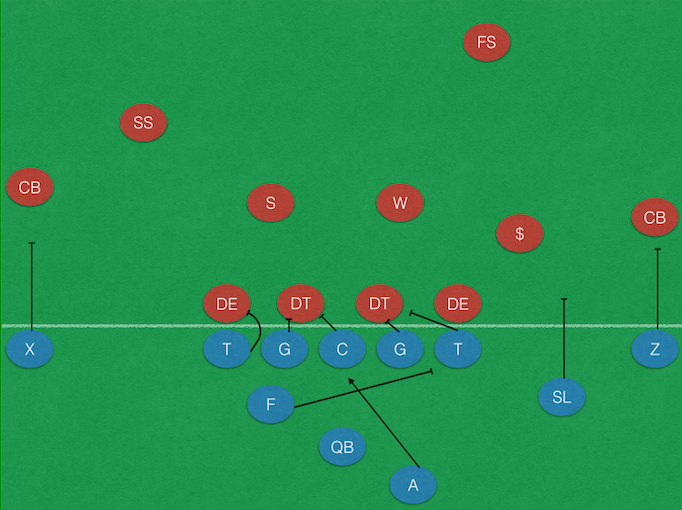 Now it's not exactly the most complicated play in the book. There's one option to where the ball can go to. No reads, no triple options, only one outcome. For the majority of the season, this was their base play; they ran this wham play at least 8-10 times at a game.  Now looking at this play, does this look like it's not working because the offense hasn't learned the "many nuances of this concept", or simply because they're not very good at running up the middle against a nickel front, and it does not fit the strengths of this offense (especially considering that you're trying to pound Tyreek Hill up the middle). The play is so limited - if the defense crowds the box, the design does not allow you to take advantage of their aggressiveness.

This is opposed to base plays from a team like Ole Miss: 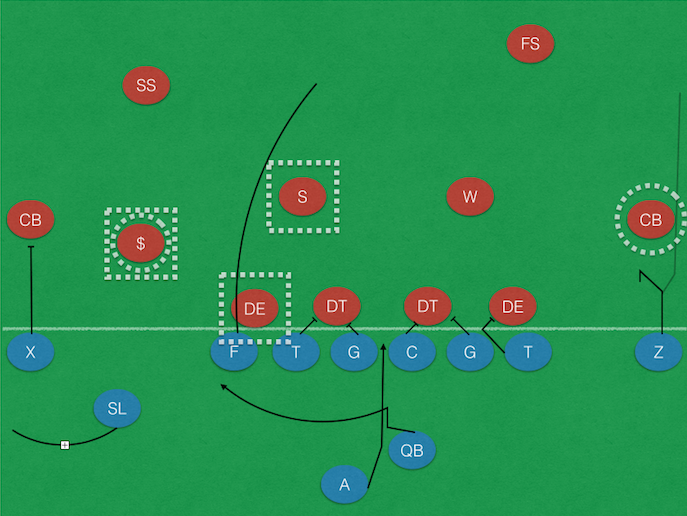 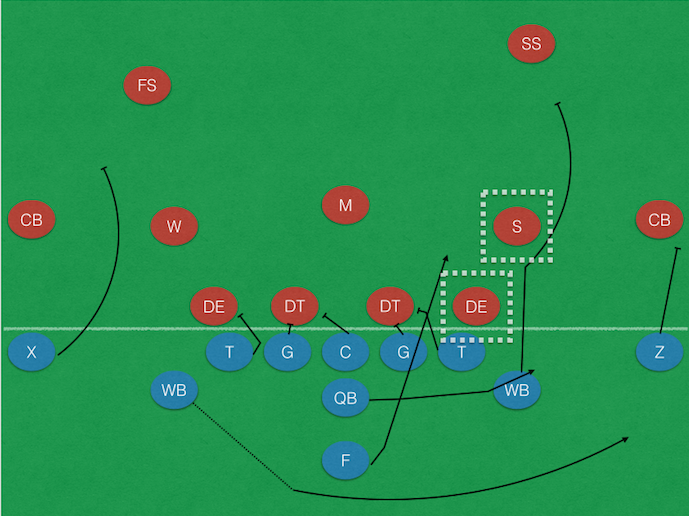 which have an answer to every adjustment by the defense.

These plays are the type that you could run multiple times a game with success. Because of their design, they are very flexible in outcome, which leads to the avoidance of negative plays.

So when you look at the simplicity of the wham play as an example, it is absurd to think as a coach that maybe the team just needs to grasp the scheme and that will lead to success. Whether or not this was Gundy’s reasoning to not change anything is pure speculation. Maybe he just didn’t want to go to the trouble of changing things. Maybe he thought it was a lost cause anyway. Any way you look at it though, you have to ask yourself, "why not do something different?" If your players are bad and your scheme is bad, why not change things to have bad players but a good scheme.

Even if you’re going to have a crappy offensive line, you don’t have to run a crappy offense. From an outsider’s perspective, it seems that Gundy has made the decision that if they don’t have the weapons, they shouldn’t even try. Now the players haven't really helped this season, with a clustermess of dropped balls, bad passes, and missed blocks, but that still doesn't stop fans from criticizing the team's vanilla nature. As crazy as that seems, when you think about it, is that theory really that far-fetched? Additionally, all of the plays that have had major success in the past have all but disappeared. The pop pass, the halfback seam, the slip screen, Tyreek’s angle route - we haven’t seen them in a very long time. It seems that if something doesn’t work consistently, they’ll run it twenty times, but if it does in fact work, they won’t use it more than once. Why is that? Who knows.

During halftime of the TCU game, Gundy made an interesting comment to the sideline reporter to something of the lines of "our offense wasn't designed to keep up with a team like TCU." My question is, why is that? Even if you know that your offense is not very talented, why wouldn't you at least try? At worst, the results of a bad offense running a good scheme and a bad offense running a conservative scheme would be the same. So if a superior scheme gives you even that much more of a chance to succeed, why wouldn't you do that?

Take a look at Todd Monken's offense. The Golden Eagles were awful last year, only winning one game at the end of the season. But he's trying his darndest there, installing a very similar offense to the one he ran here during his time as offensive coordinator. Do you think that he would ever construct an offensive scheme that was admittedly ineffective, just because he knew that he had inferior players? Do you think that he wouldn't try every year to score as many points as possible, even knowing that a lack of talent could possibly taint any potential success? Not on your life.

Now to remind you, this is only a theory. With OSU's recent improvement in play-calling, it is also possible that Mike Gundy has been the hero, finally stepping in and changing what has been so bad in the past. But if that is the truth, why was he so insistent in the past that they must keep running the same offense? Has he changed his mind? Has it actually been someone else? There are so many unanswered questions to ponder as an OSU fan. We will discuss all of these questions in part two. Very thought provoking if I do say so myself. Stay tuned.