A look at how Oklahoma State changed their offense to beat their in-state rival Oklahoma, and what this means for the future.

On Saturday night, the Oklahoma State Cowboys won a game for the ages against the Sooners, propelling them to post-season play once again. Coming in, I did not expect the Pokes to add a whole lot to this offense. Boy, was I wrong. While the offense wasn't perfect, their scheme received a much-needed upgrade, blending the perfect blend of new and old. Additionally, they featured almost every staple in a modern spread offense, which included the tag and screen game, the packaged play, the speed sweep, and the modern triple option. In today's post, we will take a look at how the Cowboys used these concepts to help them beat Oklahoma.

(*note, this post has a lot of gifs and jpegs; it is suggested to view the post with good internet connection. If, however, the gif does not work, simply click the link and view it separately.)

The Cowboys kept their receivers active on their base run plays, forcing the Sooners to cover from sideline to sideline. Not every play was a huge gain, it gave the opportunity for the ball to be spread out across the field.

Take a simple example here in one of the Cowboys' new formations.

In a new backs over set (full house, two receivers to one side), the Pokes will run an off tackle to the weak side of the field. By rule, the inside receiver on the twins side is ineligible, but he can serve as a blocker for Washington (28), who is running a smoke screen.

Depending on how the defense covers the play, Rudolph can either hand it off or throw to the smoke screen.

The Pokes also tagged a back-side route to some of their run plays. This is when a solitary route is "tagged" to a run play, giving an extra option for the quarterback. 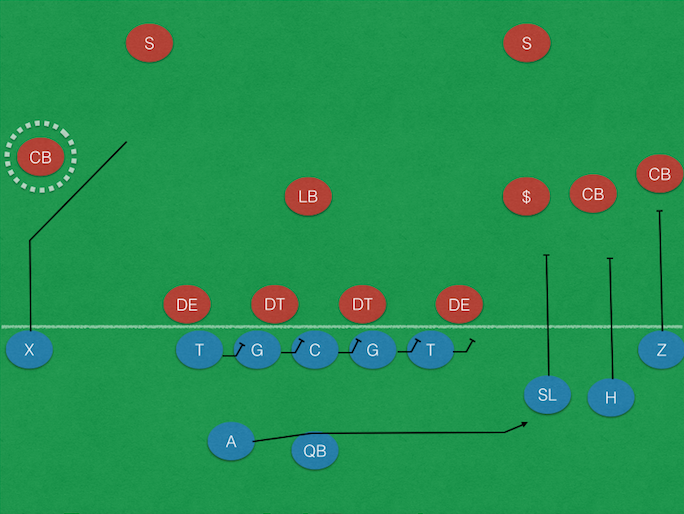 Here, Rudolph can either hand off to Hill, or if he likes the defense's alignment, throw to the post.

The addition of these concepts allow the offense to stay out of bad situations. We have talked so many times of how the Cowboys have been caught in bad situations because they have no other option to go to. By adding a singular route or screen, you give yourself an "out". These are the basics of a modern spread offense, and the Cowboys certainly benefited from them.

Packaged Plays: the Pop Pass is Back!

The pop pass was used a decent amount in the early weeks, but it unfortunately disappeared from the playbook halfway through the season. Against the Sooners, OSU brought it back, adding a new twist to the age-old concept. 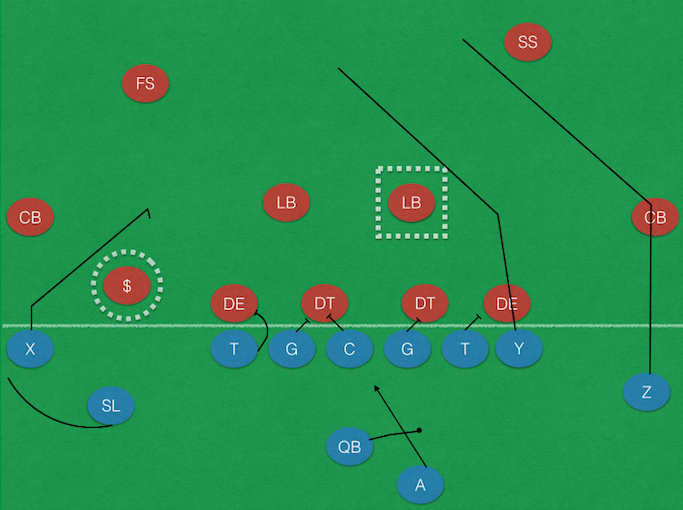 Oklahoma State ran the pop pass as they did before, but this time, they added a bubble-slant combination on the weak side. Now, the quarterback can theoretically distribute the ball to any one of the five skill players. If there is one corner covering the two (X and slot) receivers, the quarterback takes the snap and throws to whichever receiver the corner does not cover. If the corner on the flanker (Z) is playing way off, the quarterback can take the snap and squeeze the ball in the void between the corner and the strong-side linebacker. If he decides to carry out the handoff and the strong-side linebacker comes crashing down, he pulls the ball out and throws to the open tight end.

In the instances where the Cowboys ran it on Saturday, Rudolph both handed it off to Roland:

and threw the pop pass to Seaton:

When ran correctly, this play can give defenses fits throughout an entire game, simply because there are so many options. Click here to learn a little bit more about the pop concept.

The Re-emergence of the Speed Sweep

The speed sweep has become one of the biggest staples in today's spread offense. OU used it successfully, but they're not the first to do so. This wrinkle is used by all spread teams, including Auburn, West Virginia, Clemson, Tennessee, and Oregon, just to name a few.

The Cowboys brought back the jet motion with varying amounts of success against the Sooners. If you remember correctly, the Cowboys of 2011 used the jet to tear up the Sooner defense, leading to a 44-10 blowout in Stillwater.

Here, bringing a man in motion forces the defense to pause, as the ball could go to either the jet or dive man.

Not only does this keep a defense on its toes, but it also opens up for the play-action pass, such as this one:

The final staple of almost all spread offenses is the inclusion of the quarterback in the run game. After the game, I heard Al Eschbach talk how the triple option isn't used anymore in college football. At least I think that was what he was talking about, as I can't understand him half of the time. Still, he is one of the most respected sports personalities in Oklahoma, and he has a good point. Yes, the old days of wishbone offenses are pretty much over. Yes, teams won't line up and run the traditional triple option anymore. But that doesn't mean that the concepts have left the game. Actually, they're more prevalent than ever, but they have been re-invented to fit the modern spread philosophy. Teams all over the country use some form of the triple option, and now Oklahoma State has joined that group.

There were many instances in which Rudolph seemed to be reading a defensive end, indicating a read option. 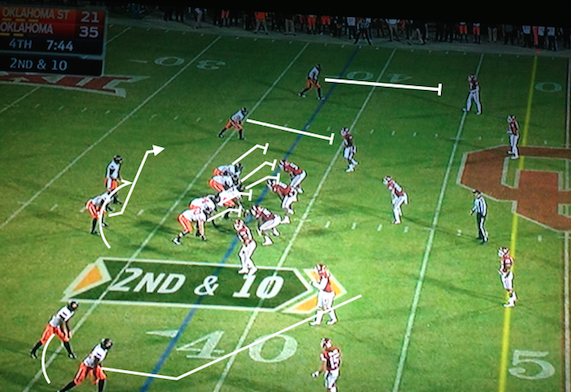 Here's an example of the read option paired with a bubble-slant, giving the play (theoretically) four different options.

The end stays, so Rudolph hands it off on the outside zone.

Here's an instance of the Cowboys using a little more orthodox triple option, with a dive option up the middle and a smoke screen taking place of the pitch action. 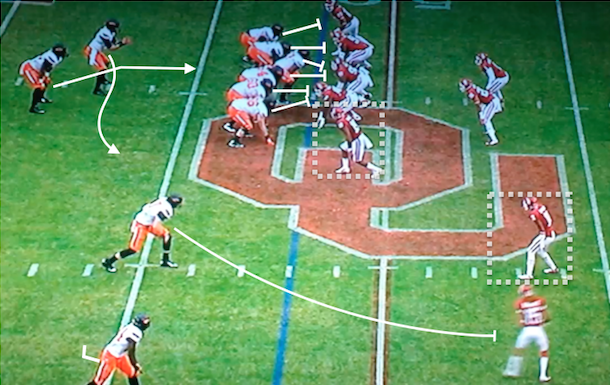 In this instance, both the defensive end and cornerback crash, leaving Hill open on the perimeter.

Now as I said earlier, the offense wasn't perfect, but with a schematic change in place, I wouldn't expect it to be. The Cowboys also added some other things that we didn't talk about, like a cut blocking scheme and some more new formations. Just the fact that they changed something is so encouraging, and they finally started doing what we've been talking about for months. Who knows? Maybe some of the coaches are CRFF fans. From what I saw this past Saturday, this offense is putting itself in position to be really potent in the coming years, and with all of the youth and talent they have, this team can really be something special. Hold your heads up high, OSU fans, because the future for the Cowboys is bright.