Travis Ford Walks Into A Bar

Travis Ford walks into a bar...and gets knocked unconscious: A story in several parts

Share All sharing options for: Travis Ford Walks Into A Bar

Travis had been stressed more than normal as he turned his university provided SUV down Knoblock. Recruiting had been going well but the email support didn't wash over him. The unhappy faithful orange still vented regularly. He’d done everything the cool kids did, recruited well, gave away tickets and he even wore an orange tie. But, Homecoming & Hoops was tomorrow night: He knew in his heart what darkness was coming.

He turned left on Elm and slid up to the curb, oddly for 830 at night, in front of everyone's favorite Stillwater watering hole...Stables. He rested his head on the steering wheel and took a deep breath letting it out slowly. "Ok," he whispered, "time to overcome this mess." He hopped out and shut the door, took a moment to admire his rims still spinning and paid no notice to the echos in an empty night.

The fresh bright red paint on the Stables door struck Travis as odd. Stables was an OSU bar and the money didn't go to decorations. The old brass door handle felt new and slid open far too easily. His creeping nerves subsided after stepping inside to the dark smoky bar with two pool tables he’d always loved.

Theresa the aging biker bartender ambled over, "The usual Travis" she asked already reaching for the cold bottle of Ginger Ale she knew he’d want. "Of course dear, but make it a double." he responded, "I've had a long day, and extra ice too"

She dropped the ice cubes into the glass and everything went grey like a 1930s film. The generic Dri fit pullover and meticulously pressed Dockers were transformed into a three piece suit with matching Fedora. Travis turned around shocked and bolted for the exit through the now packed bar. He slammed into the red door at full speed and bounced off.

Dazed, he turned around to see Dana Holgorsen oddly dressed in a paperboy cap and an ascot sitting on a pool table Indian style while holding a goat. 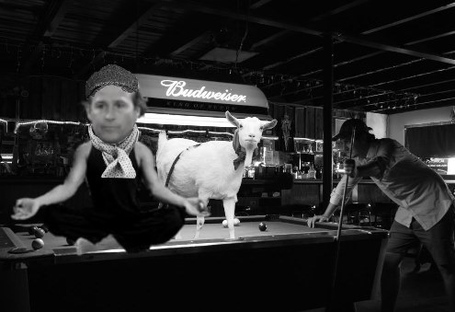 "What is going on here?" the scared coach asked. "Oh the Goat? This much Redbull leads to odd decision making, ask my staff at WVU."

"I knew there was a reason you left" Ford continued. "Eventually I was going to get to that, I have so many questions, but first, why am I in a Casablanca remake? Who’s that tall old guy over in the corner? Do they have GingerAle here? Redbull? What about old jokes that get beaten to death?"

"Very astute Travis, you've been "Moved" to a dimension where time stands still so that values can be reinforced, you have potential, Booneus sees it in you, but you aren't nearly finished. It’s time to turn away from your mistakes and make them right"

"Well that’s Mr.Iba’s job to show you, he’ll be your guide throughout these next three levels. Mr. Iba! He’s ready to go!" 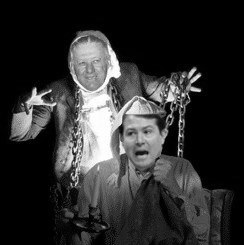 "Wait, three levels? What kinda religious imagery is this? and let go of my hand...where are you taking me??????"

"Coach Ford, over the next three levels we’ll see the punishment for continuing down this path, the recovery period for the repentant and finally the holy land, the hall of champions"

Coach Ford, led by the spirit of Henry Iba trudged off toward the beer fridge door and into the darkness.

THE ADVENTURES OF TRAVIS FORD