Travis Ford Falls Into a Bar

Our head man in charge continues his journey to the truth....

Share All sharing options for: Travis Ford Falls Into a Bar

Catch up on part one of our story here.

Travis woke up on a moldy wooden floor and looked around.

"Travis, My name is on the building you work in. You should probably know who I am by now. I am Henry Iba, and I've been tasked to show you what happens when you take the wrong path in life."

"Sorry sir, I don’t have much respect for history."

Travis quickly scanned the room. The religious imagery mentioned back at Stables and his time as president of the Dante Alighieri fan club in college had him ready for fire, brimstone and lots of bright red colors...This wasn't what he was expecting at all. Bear heads covered the walls. The patrons were wearing Green and Gold.No one noticed Henry and Travis because half of the bars inhabitants were dancing in a circle around a statue of some sort and the other half had their attention locked in on two large screen tv’s above the bar area. 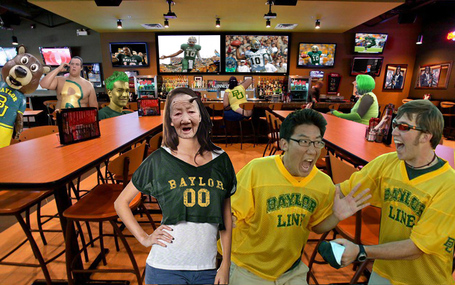 "These people don’t look so bad, Mr. Iba. Why, they’re drinking and appear to be having fun."

"Everything isn't what it seems, Travis. We need to take a closer look. Let’s head over to the dancing, shall we?"

"Sure thing, Henry." As the two drew nearer, the repetition and strength of the drum beats increased with each step.The terrifying sound of the Bear fans chanting did too

The two passed the pool table.

They drifted by the transgender restrooms,  "that statue up ahead with solid gold braids, its mouth wide open, and glass knees sure looks familiar" Travis noted. "I should ask coach Gundy why a statue has a knee brace and a sleeve over one arm. He likes art, I’m sure he’d know"

Emerging from the circle of eleven polo shirts and boat shoes clad men, the chief,  wearing a chrome gold helmet and skinny jeans, stepped into the center. A hush fell over the group, and the dancing stopped again.

The chief took a swig of Everclear into his mouth, lit a match, and spit fire into the trashcan of Dave Campbell's 1994-2009 Texas football magazines that rested at the feet of the gaping mouthed, glass kneed statue.

"RAAAAARRRRRRReeeeeek," the chief screamed and then squeaked femininely.

Bewildered, Travis asked, "Mr. Iba, what’s going on here? Why are we here, and what are these people doing?"

"Baylor fans have became so thirsty for victory that they sold their souls to a pagan God, Travis. They abandoned their principles and threw their support behind men of questionable character so that outsiders would like them. It is important for you to realize that there is more to your job than winning. You must guide young men into adulthood, not overlook their flaws in exchange for victory. These bears are in a hurry to forget where they came from and it's causing them to lose their humanity. The gold and green horde no longer communicate in English and they do savage things to each other."

As he finished, the braaaaaay of the donkey could be heard over the burning magazines. A man wearing a tutu and Lacedarius Dunn jersey was seen leaving the kitchen area and leading a donkey towards the circle.

"Mr. Iba, this is terrifying. This is what happens when people put wins over principle? Please save me from this place.  I don’t want to see what happens to the donkey. I’ve already seen Clerks Two...I don't need to see it again."

"That’s fine, Travis. I think you've learned your first lesson--the importance of priorities. Let’s go over to the bar and get a drink."

The mentor and mentee walked by the pool tables and the gender neutral restrooms just as the donkey began to squeal"...........

The bar was next, and Mr Iba wasn't sure Travis could handle what was coming....

THE ADVENTURES OF TRAVIS FORD