The Cowboys suffered an over-time heart-breaker at the hands of Iowa State for the second time this season.

It's no fluke that Iowa State is ranked the 16th best team in the country. They have talent and solid coaching. Combine that with an intense crowd, and it makes the Hilton a very difficult place to win.

The Cowboys haven't played well on the road all season, but they looked to exorcise those demons against the Cyclones. They went into halftime up by seven.

Oklahoma State came out of the break looking to make a statement. With a 13-4 run they stretching the lead to 16 points.

"No one was told to foul. We should have." -Markel Brown

Things looked good for the Pokes, but you knew Iowa State was going to make a run. They're too good of a team, and have too good of a coach to get run out of their own gym on senior night.

Iowa State Head Coach Fred Hoiberg called timeout with 16:19 remaining on the clock. A good coach will make the adjustments needed to get his team back the momentum. Iowa State has a good coach.

For the next 5 minutes and 15 seconds the Cowboys only scored 2 points.

During the Iowa State run Travis Ford called timeout twice, and benefited from two TV timeouts, but couldn't make the adjustments needed to stop Iowa State from getting back into the game.

To win in Ames is a tall order, but the way the loss unfolded came down to coaching. Pure and simple, no getting around it.

Markel Brown and Marcus Smart had big nights.  Brown had a double-double with 26 points and 12 rebounds. Marcus Smart led all scorers with 27 points. He also had 5 assists, and 4 steals. Numbers only tell part of the story, though.

With time running out and Iowa State taking the lead, Marcus Smart took over the game. He pick-pocketed Iowa State standout guard DeAndre Kane, and took it the length of the court for the fast-break layup, putting Oklahoma State back up by one.  After a couple more Cowboy buckets, Iowa State was forced to foul.

With 0:05 on the clock the Cowboys were up by two, and Phil Forte was at the line to shoot two. Forte is an 86.7% free throw shooter. After making the first, the second foul shot bounced off the rim into that other 13.3%.

Iowa State rebounded the ball and found Naz Long for a wide open 3-point jumper from just outside the arc. A spot Long had already hit from in the game.

"He has the utmost confidence," said Iowa State star Melvin Ejim speaking about Long. "The kid just hits big shots. That's all it is. He's a big-time player."

It was an amazing shot, but it was a shot that should never have been taken.

Markel Brown after the game, "No one was told to foul. We should have."

"We wanted to foul. We were telling our guys, but they didn't either hear us or react," Ford said after the game.

What's odd about that statement is, Forte was shooting free throws in front of the Oklahoma State bench. Everyone huddled around Brown before Phil's second free throw attempt, not 5 feet from coach Ford, and the tension was so high in the Hilton you could hear a pin drop. 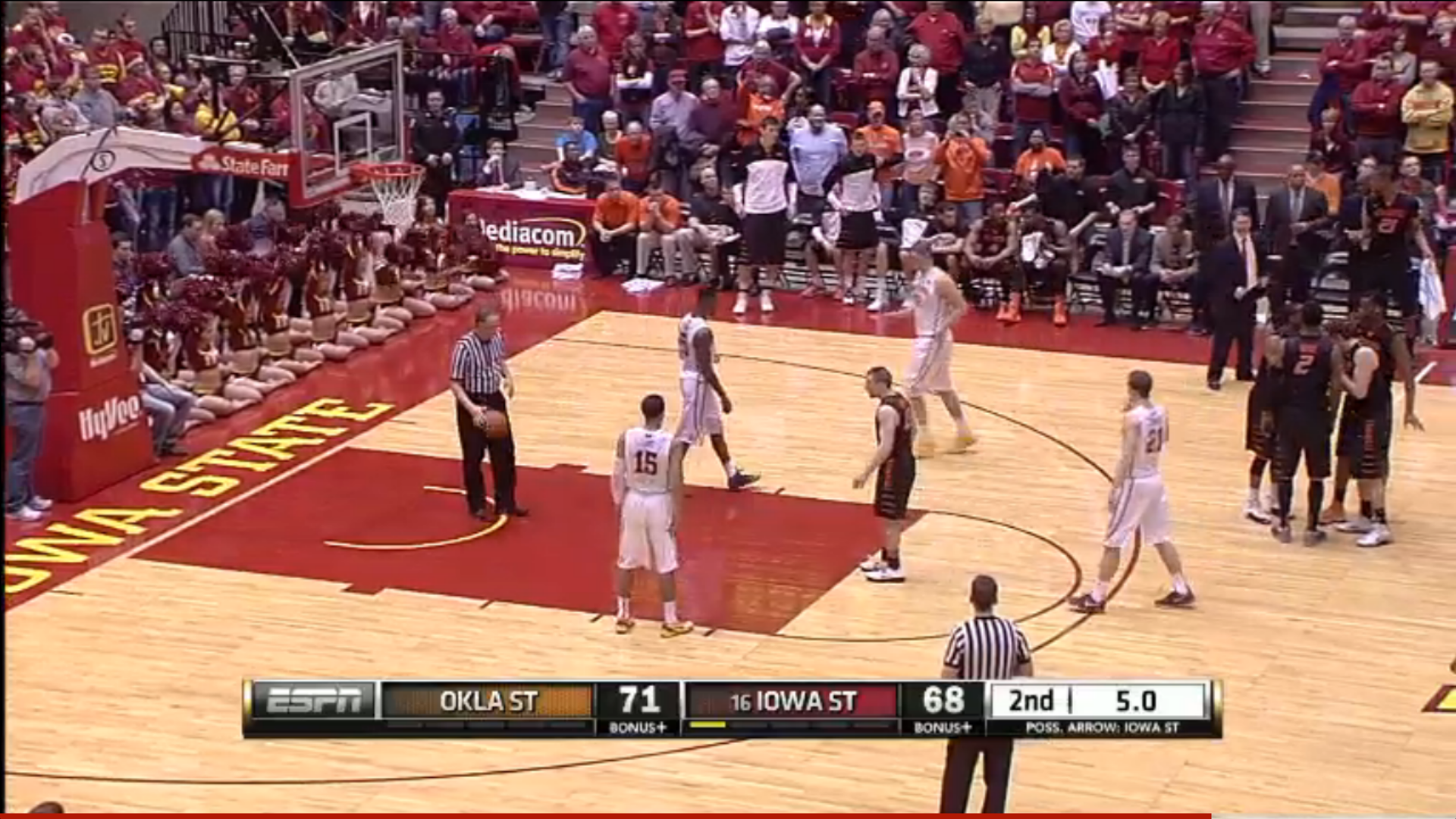 Furthermore, once the Cowboys broke the huddle to take their positions for the free throw, Sager is called over to coach Ford. 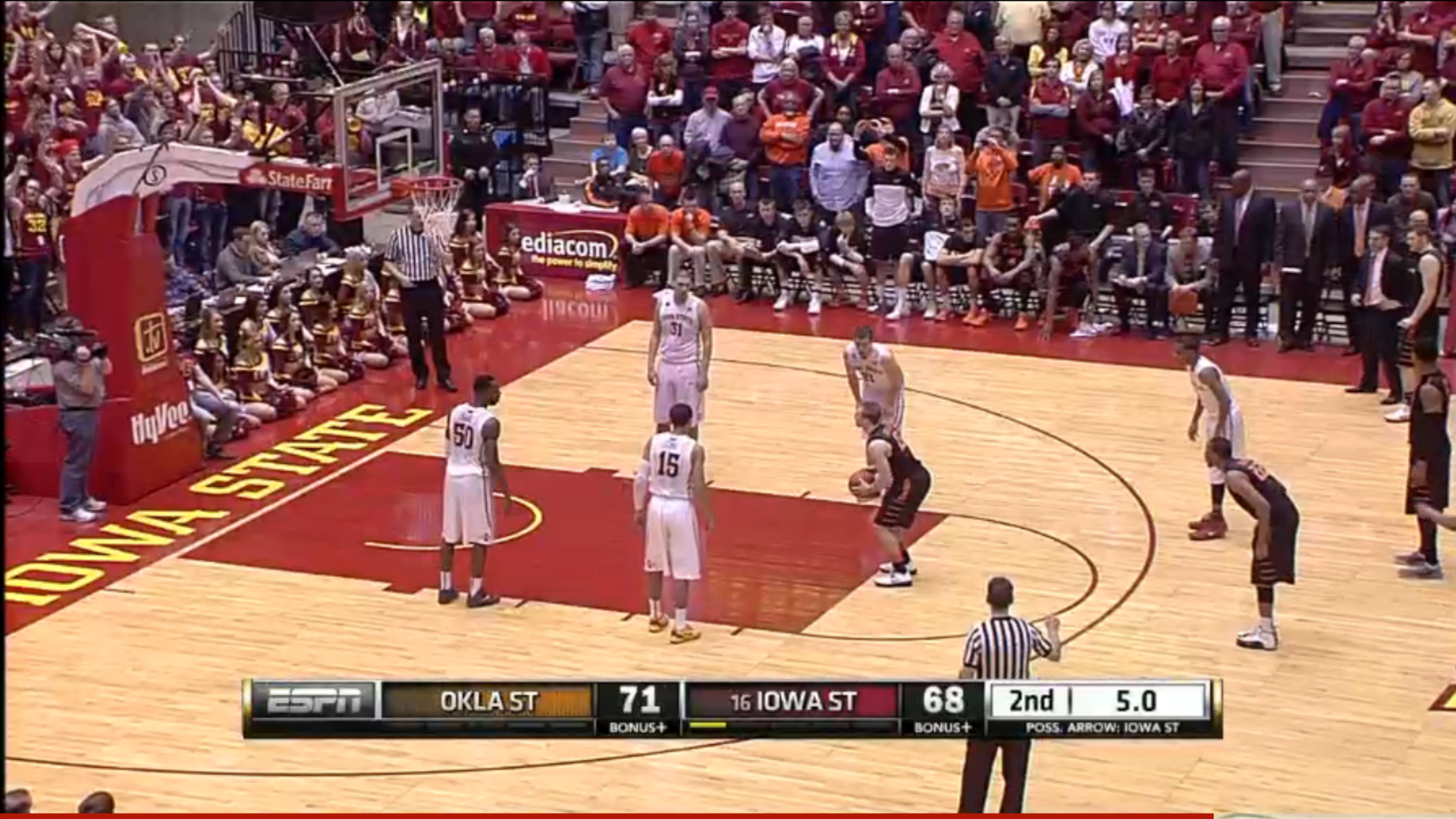 Following the miss Sager ran down the court to fill the lane just as the ball filled the net. He didn't look like a guy told to go foul.

It's also worth pointing out there isn't even anyone under the basket to foul in case Forte misses.

In over-time fortunes were reversed. Iowa State had the momentum and the lead as time wound down. They capitalized where OSU didn't. They fouled before the Cowboys could get a shot off, and secured their win.

Overall its not a bad loss for Oklahoma State. They played tough, and with a lot of heart.

The Cowboys will take on Texas Tech on Wednesday night at 6:00pm in the first round of the Big 12 Tournament. A win against the Red Raiders should secure a NCAA tournament birth.