I break down my bracket, and my predictions for the 2014 NCAA Tournament. I guarantee that if you follow my picks you will at least not come in last in your pool ...maybe.

There is a billion dollars on the line to come up with the perfect bracket this year, and everyone from sports fans to mathematicians are trying their hand at predicting the tournament.

Accurately predicting the NCAA Tournament is a bit like trying to guess whether or not Big 12 refs will call a block, charge, double foul or just swallow the whistle, but here goes nothing.

In 15 of the last 17 years a 10-seed or lower has advanced to the Sweet Sixteen, and this year it's in the South Region. I am going with Dayton. Syracuse is a shell of their early season selves, and it's going to cost them in the tournament.

The Cowboys have a favorable match-up in in the back court against Gonzaga, and that's all it's going to take to make a run to the Final Four.
Wait, what?

With the Orange out of the picture, the Jayhawks will advance to the Elite Eight to face Florida, but whether or not Joel Embiid can keep his back in good shape is something to keep an eye on.

Florida is the only team in the tournament that has all of the traits the last several champions have possessed. I have to go with the Gators coming out of the South.

Just about every year a 12-seed beats a 5-seed. The most favorable match-up for that to happen is Harvard over Cincinnati. The Bearcats aren't playing well, and the Crimson are a deep squad. It wont matter who you take though, because neither are getting by Michigan State.

ESPN is on Michigan State like Miley Cyrus on construction equipment, but I'm going to go with the Big 12's own Iowa State making the Final Four. The Cyclones are peaking at the right time to make a deep run. A big win over Villanova in the Sweet Sixteen will give ISU the confidence needed to knock off the Spartans.

The Cowboys have a favorable match-up in in the back court against Gonzaga, and that's all it's going to take to make a run to the Final Four. Wait, what?

MARCH MADNESS BRACKETS: ALL THE INFO YOU NEED

Everything you need to help you fill out your bracket all in one place. Don't forget to join the CRFF's Bracket Challenge. There will be prizes!

It's not a billion dollars, but there are prizes.

I have a feeling that getting that first win in the tournament will give Oklahoma State the confidence to beat a slumping Arizona, advancing OSU to the Sweet Sixteen to face SDSU. Once North Dakota State upsets the Sooners, the San Diego State Aztecs will have a clear path to take on the Cowboys. For those counting, that's two 12-seeds beating 5-seeds.

The Pokes will get by the Aztecs because of Marcus Smart. SDSU is a great team, but heavily rely on guard Xavier Thames. Smart will be too much for Thames, and Oklahoma State goes through.

On the other side of the bracket Creighton will survive a tough, tough game against Wisconsin, and that's exactly what the pokes need to continue their Tourney run.

Creighton struggled against the more physical Providence in their conference tournament final. That combined with a slight let down after the big win against the Badgers will be enough to send the Pokes to Arlington, Texas.

Of course all this rides on Travis Ford making good coaching decisions, so...oh well, my bracket is going to be toast by this weekend anyway.

I believe Kansas State will give Kentucky an early exit. Kentucky's fabulous five freshman have started to figure things out after struggling early in the season, however under the pressure of the national stage, I foresee the Wildcats (of the blue grass variety) reverting back to hero ball.

Despite a unbelievable season, the Shockers aren't making it out of the Round of 32.  With the undefeated streak hanging over their heads, and an in-state rivalry on deck, I believe Wichita State will succumb to the pressure.

It's almost guaranteed that a 2-seed will fall before the Sweet Sixteen, and I have Texas sending the Wolverines back to Michigan. After that, Duke will have a pretty easy trip to the Elite Eight where they'll face Louisville. I expect Duke's fantastic freshman, Jabari Parker, and their excellent 3-point shooting to carry them past the defending champions.

And The Champion Will Be

In my bracket for all the marbles, I have to go with Florida. The Gators are just too good, and will get the win against the Blue Devils in the Finals. 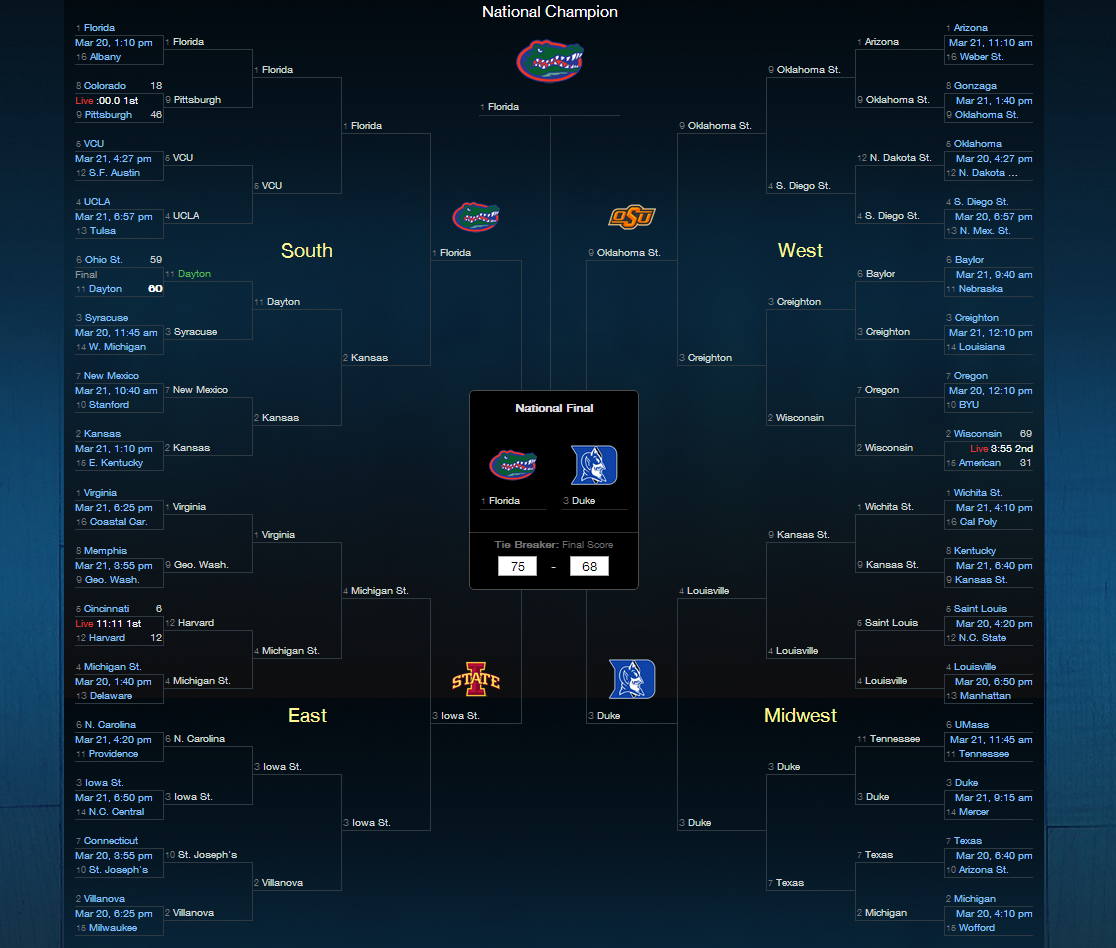 MARCH MADNESS BRACKETS: Everything You Need To Know