Share All sharing options for: 2014 WORLD CUP: Schedule and Standings

The World Cup begins with group play which was determined by a seeded draw.  In group play teams play in a round robin format where they receive three points for a win, one point for a draw, and zero points for a loss. Any ties in a group are determined by each teams goal differential. Basically every single goal is important. The top 2 teams from each group advance to the knock out stages. Tie-breakers go like this...

It didn't take long for the drama to start. Yesterday the Netherlands absolutely dismantled Spain in a 5-1 upset. Spain is the defending World Cup Champion, and is considered the best team in the world, but now their tournament hopes are on the brink. A four goal differential in one game is huge. Chances are a tie would send them home. They must win out, and hope the Dutch do the same.

The United States has their work cut out to make it out of group G, otherwise known as the group of death. Germany is the second ranked team on the planet and the favorite to claim the top spot.  Portugal only has one of the best players in the world in Cristiano Ronaldo, and an extremely talented roster in general. Ghana is the final team in the group, and is the bane of team USA's existence in the World Cup. The African country has sent the U.S. home the previous two.

Here's a complete look at the standings, schedule, and knockout round bracket. Teams that are through to the knockout round are bold, eliminated in italics. Click on the results for match highlights. 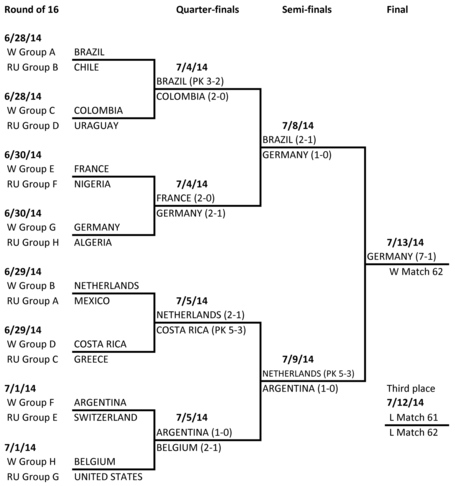 No, the Germany - Brazil result is not a typo.