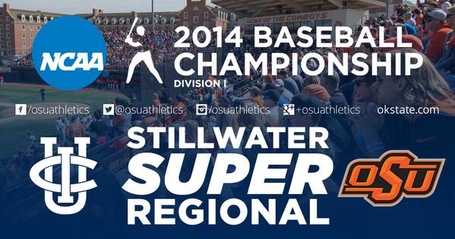 After tonight's game between Oregon State and UC-Irvine, where the Anteaters won a 4-2 game to knock out the number one overall seed in the entire NCAA Baseball tournament, eyes will once again shift to Stillwater as the Cowboys will be hosting the Super Regional round against the Corvallis Regional champions. The Anteaters were the number three seed in the Corvallis regional and many experts didn't think to go against the number one Beavers. UC-Irvine had already beaten the Beavers once in the regional, and were the undefeated team entering last nights game. The Beavers would had to have beaten the Anteaters twice to advance. Had the Beavers won, Oregon State would have stayed home and hosted the Stillwater Regional champion Cowboys. Looks like they are staying home anyway.

Cowboys will be back in action Friday night at 8:30pm Central.
Game 2 will be 9pm Saturday.
Game 3, if necessary, will be 8pm Sunday.

All games will be carried on ESPNU.

Check back on Cowboys Ride For Free today and we will have a preview of what to expect from the Anteaters this coming weekend.