Walsh is a great leader and athlete, but is it enough to bring a Big 12 Championship to Stillwater?

Share All sharing options for: OKLAHOMA STATE FOOTBALL: The Case Against J.W. Walsh

Let me start this off by clearing the air: I don't hate J.W. Walsh.

If this were late 2009 or early 2010, J.W. Walsh would be a perfect fit for Oklahoma State. He has the same style as Zac Robinson, and is arguably better. He could probably lead the Cowboys to a couple of 9-4 seasons. But, how does this make him capable?

In late 2009, the Cowboys were playing Colorado. Zac Robinson was out with an injury, so backup quarterback Alex Cate was called into action. The first half of that game was hardly a breeze for Cate; he went 0-9 with 1 INT. The Pokes were down 14-10 going into the locker room and Mike Gundy needed to create a spark.

Now, Weeden didn't go out there and put on a spectacular performance. He had a humble 168 yards passing and 2 touchdowns, and it was enough to propel the Cowboys to a 31-28 victory and secure his place as the front runner for the job in 2010. 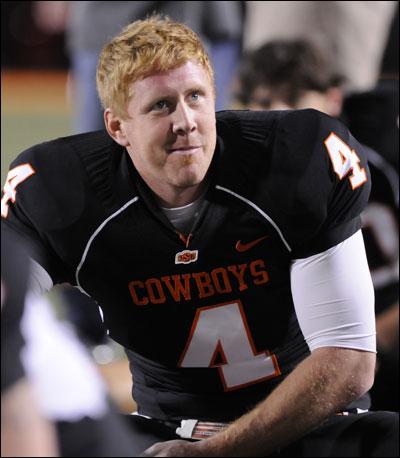 We all know that Weeden went on to become the greatest quarterback in school history. He led Oklahoma State to their first Big 12 Championship, BCS bowl, 12 win season, and broke numerous records. And for two weeks in November, he was the Heisman front runner (not in the mood to explain why he didn't win). He was a pocket passer and utilized his receivers to make plays with his accuracy and arm strength. Perhaps his greatest legacy, is showing what Oklahoma State quarterbacks should be.

In order for Oklahoma State to win another Big 12 Championship, they need to have a QB with an arm.

This is where we come back to Walsh. I understand that J.W. Walsh is the greatest leader since General Patton, but his athletic ability does not fit the mold for what an Oklahoma State quarterback should be. If the Cowboys want to beat OU, it needs to be with Daxx Garman or Mason Rudolph.

Did you know that Tony Lindsay is the only Oklahoma State quarterback in the last 38 years to beat OU and have more than 200 rushing yards in a season? Not to mention, OU wasn't even a good team in the late 90s. So really, the only quarterbacks to beat a good OU team have been Josh Fields and Brandon Weeden, two of the greatest quarterbacks in school history. Funny enough, Fields and Weeden were almost exclusively passing quarterbacks.

Walsh is not going to cut it.

Personally, the thing that bothers me the most about J.W. Walsh is the feeling of vulnerability I get when he steps on the field. It seems like every game he plays is his first game of the season. He is always on a short leash, so the play calling is very limited. This is harmful because it limits the offense from building each week.

With a good passing quarterback, it would allow Yurcich to open up is playbook and effectively utilize the entire offense (err, Lego set) like we saw with Weeden.

Whether I agree with it or not, Walsh is going to be our guy come August 30. He's going to satisfy in September, and everyone is going to be behind him. But it will all be fun in games until he can't piece together a drive against a Big 12 opponent. That is when the Colorado game will repeat itself and we will find out who the next great quarterback at Oklahoma State will be.