It’s July, and since football news is slow, we sent one of our anonymous undercover reporters (ie: new contributor) to look into the night life of the football devil we love to hate….Squinky…. What follows is an eyewitness account.

Somewhere in the rural area surrounding Stillwater, Squinky enters a rather nice looking but isolated establishment at around 2am on a Thursday morning (and we wonder why Thursday night games can be so stressful!). He is smartly dressed and moves confidently.

He takes a seat at the far end of the bar and gestures to the bartender. The bartender reacts without a word. Squinky is obviously a regular patron

As he appears to settle in and savor ​what looks to be a fruity cocktail of some sort, I notice a rather disheveled being at the opposite end of the bar. He is watching Squinky intently while nursing a can of Colt45 malt liquor. ​

After both consume a couple more drinks, the unknown being stands up, approaches Squinky, and takes a seat, rather uncomfortably, on the stool next to him. Squinky doesn’t react.

I move in from my seat at a table in the corner to a bar stool a couple places away from these two characters. I have not been noticed. I set my NSA issued recording device on the bar and point it towards what I assume will be some kind of conversation. Without saying a word, the bartender brings me a Jack and Coke.

After what seemed like several minutes, with still no reaction from Squinky, the stranger finally speaks.

Silence. All you could hear was the garbled arguing of several football devils on the opposite side of the bar, a schematic of the upcoming College Football Playoff on the table, along with pictures of Les Miles and Nick Saban.

"Do what?" Squinky answers in an emotionless monotone without looking up from his drink.

The Bears have a football devil

And his name is Claud. Between Claud and the Gundy/Yurcich Badger, Baylor received an old fashioned, behind the woodshed ass whooping.

The Bears have a football devil

"Well, I can tell you that if you don’t start bathing, everyone is going to know who you are way before you arrive."

"I don’t need your attitude. I’ve been on the street ever since my mom kicked me out for claiming to be the ‘turf monster.’ It’s not easy living under that tarp you know."

"Ha, I would have kicked you out too. Even sports devils know the ‘turf monster’ isn't real. If I was your mother, I would have you committed if I heard you talking like that."

"SHUTUP. You say that in public and you’ll be working for Savannah State."

Squinky has a very "Clint Eastwood" look on his face. I was actually afraid for the stranger’s life at this moment.

"Look, man, I’m sorry, I just…I don’t know…they told me that you are the best, the builder of hopes and breaker of dreams. Nobody does it like you."

"Who the hell told you that?"

"Those guys over there."

The stranger points at the aforementioned table where several football devils are watching the proceedings, and they all begin to chuckle. Squinky shoots a disapproving glance their way.

"Yea, right. So what do you want to know about Iowa State?"

"I really don’t want to talk about this."

"Please, you have to tell me. I was handed Baylor because I have no talent. They didn’t need any help. They were worse than Kansas is now, if that’s possible. Anyway, they bring in this Briles fella and that big diva Bob and suddenly they’re winning games and building a new stadium. I had to do something."

"So, what’s the matter with what you did?" You can tell Squinky already knows the answer to this question.

"I got caught! You saw it. Who knew some dude would take a picture of me reaching up to trip that QB out of nowhere." 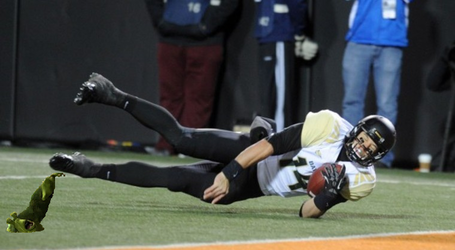 "Shouldn’t have been there in the first place, but you know that now​.​ ​T​h​e​ fumble that got returned for the TD was pretty good work."

"Nice try, but I happen to know that was you. That’s why you’re a legend, you know. You actually helped the team so they would be in a position to have their hopes and dreams dashed on the rocks."

"Ok, you’re right, and just like me you had to learn this lesson the hard way."

"You really don’t have any talent, do you?"

"Nope, not a lick. Cooper has more talent than me. I know that’s hard to believe."

Squinky looks down, shaking his head.

The stranger, who I think is named Claude, stares intently.

"It’s all about taking them to the brink."

"Really? Ok, the brink is the edge. You have to get them so close they can taste it, then reel them back just far enough it hurts, but they can still see the prize. That keeps the hope alive. You did your best work with Baylor before they were at the brink."

"Right, but you did the same thing with OSU at Ames. That was one game too early, according to your theory."

"That’s right. Iowa State was the perfect situation. Too perfect in fact. So perfect that I thought I had utterly crushed the Cowboys to the point that they wouldn’t recover for Bedlam. I thought my work was done. But that damn Gundy and his unusually mature QB rallied the troops. Learned a hard lesson that night of Bedlam…when you make last minute plans, they can short circuit and end up helping the very people you want to hurt."

"You know, when you say it that way, it actually sounds bad."

"So back to what you said earlier. You actually HELPED OSU against Baylor?"

"Absolutely. You see, letting them slide after West Virginia would have been the easy way out. Just look at what happened after I lifted them back up. They actually believed they were going to beat OU and win the Big 12. The big win against Baylor is what made some of those moments in that Bedlam loss so special. The magnificent running game being suddenly put in the deep freeze…Gilbert’s dropped interception…it only takes a couple of those to make a classic."

"What about the TD ​​being called back on the first play, or the play clock running out on the fake FG that went for a TD?"

"You haven’t read my book, have you? You can’t count on the refs. Anything you get from them is a bonus."

"So, you’re effort in the OSU-Baylor game wasn’t the mistake, although getting caught on camera was definitely a whiff. But you didn’t follow that up against Texas. Believe it or not, that’s where you’re better than Cooper. You made an effort, took an action. Cooper just stumbles around in Austin, which is actually appropriate since the football program is doing the same thing."

"I believe everyone has some level of talent, some more than others. Except Kansas, of course."

"Did you learn that from your father?"

"No, actually got that from Coach Sny….uh, a dear friend."

"Ok, I think I’m beginning to understand, but you still haven’t answered my question."

Squinky, almost imperceptibly, flicks the tip of one tentacle. Claude is suddenly on the floor, bar stool tipped over.

As Squinky reaches out to help Claude to his feet, he says in a fatherly tone...

"It’s that easy to crush their dreams, son. It really is that easy."

It was at this point that Squinky caught a glance of me watching, then everything went black. The next thing I remember, Bill Snyder was helping me to my front door, saying something about being careful about the places I frequent.