As I approach my first season without either of my parents, I got a little nostalgic.

Share All sharing options for: One Fan's Oklahoma State Memories

As many of you might recall, I lost my mother August 31, 2013, only a couple of hours after OSU's nationally televised victory over Mississippi State.

As we approach 2014 minus one of the most impassioned Cowboy fans who ever lived, I've spent a fair amount of time recalling memories from football seasons past. Thought I would share.

11-14-1970...This is my earliest clear memory of OSU football. Mom brought me to the game. I don't recall whether or not my father was present, but it was a miserable, cold, rainy day on the wooden benches at Lewis Field, watching the Cowboys lose to Colorado, 30-6.

1972...I was 10 yrs old, and was first introduced to Reuben Gant, Brent Blackman, and a winning record of 6-5, which I thought was the best thing since sliced bread. For some reason I thought it was really cool that OSU beat Kansas State and Iowa State by the same score of 45-14 two weeks in row. FYI...Blackman completed 30 of 102 attempts that season for 572 yards. He rushed for 842. My how times have changed. 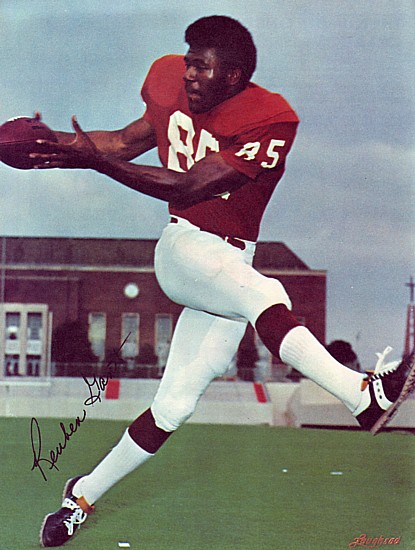 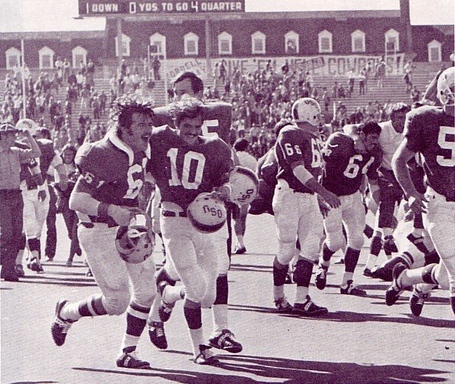 via img.fanbase.com (don't you love the helmets?)

9-29-1973...As mentioned in this post, Arkansas turned the lights out before we left the stadium in Little Rock (OSU's page says Fayetteville, but I clearly recall War Memorial Stadium). I got to watch OSU hang 70 on the hapless Southern Illinois Salukis (I went home and looked up "salukis" in the dictionary). That would be like 150 points nowadays. About a month later I watched as we tied Nebraska (I adopted the "we" of fandom). WE had arrived. Next season would be "it." This was my first exposure to the hope of "next season."

1974 would be the first full season that I remembered pretty clearly. After opening with two wins, including a 2nd consecutive handling of Arkansas (we attended this game several years running), OSU would lose consecutive games to Baylor and Tech of the old SWC. After drubbing Missouri in Stillwater, we gladly headed to Nebraska for the game with the Cornhuskers and my first exposure to Squinky. Dad had managed tickets from Mr. Baumgartner, whom he knew through the cattle business. Mr. Baumgartner had a red pickup truck with a big "N" on the door and "Cornhuskers" on the tailgate. George Palmer and Charlie Weatherbie drove the Cowboys to what should have been the winning score, but a flick of the tentacle caused Weatherbie to fumble on the Cornhusker 1 yd line (right in front of our seats). Later that season, Dad and I would go hunting the day of Bedlam, which was just an excuse to take a radio and listen to the game because Mom wanted nothing to do with it. If memory serves me, I believe OSU was leading 13-10 at the half. I think OU scored to start the 2nd half, and Squinky talked the Cowboys into NOT covering the ensuing kickoff. OU recovered it for another TD and the route was on (I would grow accustomed to the annual beat downs). The Cowboys would later defeat BYU in the Fiesta Bowl, 16-6.

1976 would be my first taste of Bedlam victory and bumper stickers. I was 14, and OSU was now fully engulfed with that nasty burnt orange phase, but I was all in. I collected just about every bumper sticker known to man, including "Orange Power" and one that read "The Girdle for Heisman." Terry Miller famously wore a girdle due to some hamstring issues, so it became a "thing." I think the game against Colorado was the infamous Gary Irons interception in the end zone that he unfortunately decided to run out, fumbling on the 1 (Squinky). The Buffaloes recovered and scored a TD to seal the win. Dad procured two tickets to Bedlam in Norman for Oct 23, but my sister decided to get remarried that day in Atlanta, GA. I've told the story numerous times about how I was jumping back and forth on the University Hotel room beds waiting for the score updates to scroll through every 10 minutes or so, refusing to finish getting dressed. I can still feel the relief when "31-24" flashed on the screen in favor of OSU. I got a Tangerine Bowl tshirt following the Cowboys' win over BYU. After 6 consecutive winning seasons and a Bedlam win, I was ready to go for the "next season." Oh well....

During these early years, one of my favorite things to do was have lunch in the alumni room in Gallagher before the game. If I'm not mistaken, Lucy Miller (who would win Miss Oklahoma in 1976) was one of the staff that would greet, wait tables, and generally make sure folks were taken care of. I had a huge crush on her. All the home games were at 1:30pm on Saturday, so it was always a full day of activities. It took about 90 minutes for the drive from Pawhuska to Stillwater, through Fairfax and Ralston (Hwy 60 west to Hwy 18 south to Hwy 15 west, then 177 south). I remember the old A&W Drive In on the north side of town. That was my "marker." When I saw that, I new we were close. Following the games, we would often stop to visit and sometimes have dinner with Hamp Burns, whom my father had known during his years in the Soil Conservation Service. While the adults talked, I would go to Mr Burns' bedroom and huddle next to the AM radio to hear the football scores for the day, waiting anxiously to hear the call of the OSU game WE HAD JUST SEEN THAT DAY, as if I didn't know the result. Away games, if we didn't travel, were always stressful as we couldn't depend on AM radio to catch the broadcast. We often were left waiting for the evening news to find out the result. What a different world that was.

I have no distinct memories of '77-78, both losing seasons, except for OSU starting 0-5 in '78 and taking alot of heat from my Sooner friends in high school. Again, nothing spectacular about 1979 even though they had a winning season, as I was quickly becoming used to the idea that losing to both Nebraska and OU pretty much spelled doom for anything special. I was introduced to the inconsistency that was Jimmy Johnson's "Press On" motto (winning season...losing season...winning season...etc). One of my high school acquaintances made the team as a walk on, and is now an assistant coach at UTSA (Eric Roark).

In this post mentioned above, I recount the story of my first semester at OSU (1980), and my parents coming to my dorm room prior to the game against Washington. Jim Traber fell over his own feet for a sack, but still managed to lead a comeback that fell short. Alas, it was the only time I remember leaving a game early, so we didn't see his heroics. I would get to see him lead a TD drive against OU later that same season, which was interesting. My lifelong best friend, Daren, is a Sooner. He invited me to come down for Bedlam in Norman. OU was trouncing the Cowboys, 63-7, as OSU mounted a late drive, led by Traber. Switzer put the starting defense back in the game, but the Cowboys still managed to score. That was my consolation for the day.

I was looking right at Hannon as he put up the shot, sitting exactly on the half court line at the bottom of the screen, 3 rows up in the bleachers. Several of us from the 13th floor of Willham South (The Dirt Babies) were part of the crowd that stormed the court.

9-26-1981...This was the last OSU game I would attend for over 30 years (this would be my next game). If you think Bob Simmons offensive game plan was monotonous, try watching Shawn Jones run up the middle 6 consecutive plays, each resulting in fewer yards. The Cowboys would lose to San Diego State that day. I could never stand Jimmy Johnson, except that he employed my former 8th grade science teacher, Butch Davis, who would continue on with Johnson to Miami, then the NFL with Dallas. I would leave school later that fall (let's just say I was more committed to fun than study...the Colvin Annex was my second home).

I could go on with more memories, but these are the ones I grew up with, the ones my parents used to implant the love of all things Oklahoma State orange. I speak of them often. I may have come and gone from Cowboys athletics over the years, but I've reconnected even though I live in another part of the country. My OSU family is nearby no matter where I am.

It's been a really long journey, but technology has brought me home, and I'm ready for the hope of another season of OSU football.

(Do me the honor of sharing some of your earliest OSU memories, good or bad, in the comments)