How short will Yurcich's leash be this year?

Share All sharing options for: How short will Yurcich's leash be this year?

There were rumors that Gundy stepped in to help with play calling last year. If true, will that happen again? I hope not. I hope there is no question that Yurcich is in control of this team and we can all appreciate the output.  However it is not out of the question to see this squad struggle through a long and difficult second season under Yurcich accompanied with stuffed screen passes and bone crushing zero-yard-gain runs.

So how likely is it that this OC will get an overall better output this year than last?

Let’s compare the stats for our most recent Offensive Coordinators in the Les/Gundy eras - Gundy, Fedora, Gundy again (with Brewer as co-OC), Holgorsen, Monken, and Yurcich to see if they improved year over year. Oh, and we’ll throw in Gundy’s time under Pat Jones just for the hell of it.

So what did we find out?

We can see why Gundy kicked himself out as OC. Gundy as OC and Gunter Brewer as his co-offensive coordinator had a good 1st year but their 2nd year did not meet expectations.  In 2009 OSU opened the year at #9 and beat #13 Georgia. This skyrocketed the Cowboys season hopes and ranking, placing them at #5.  Sadly, they promptly lost to the Houston Cougars. That season lead us to Zac Robinson's injury, Brandon Weeden’s debut, a Cotton Bowl appearance, and we hired away the Cougars OC that beat us, so it wasn’t all bad.

Fedora rocked the second year compared to his first. 110% MORE Pass TDs? Well, in 2005 OSU averaged 1 passing TD a game. 2006 bumped that number up to 2.1. For comparison, Yurcich’s offense average 2 Passing TD’s per game. So it’s not so much that his second year was phenomenal, but the first year was just terrible. 2005 and 2006 were both big rebuilding years, as those were the first two under Gundy has HC. No matter the circumstances, Fedora proves that a second year can be a HUGE improvement. This sharp increase keep Fedora at OSU for a third year as he guided Zac Robinson to the Insight Bowl (also the same year as the "I’m a man, I’m forty" speech).  This was Fedora’s last year, as he was snatched up by Southern Miss to be their Head Coach before moving on to UNC.

Monken’s second season was not as good as the first, but that was expected with the loss of Weeden.  His second season still had great numbers, which lead him to be yet another OSU coach poached by Southern Miss.

While going through the data I found that in the past 20 years, Gundy has been the OC 8 years. He had 6 years under his belt (at OSU) before being Head Coach. For some reason those numbers were much higher than I expected to see.

After reviewing the 1st vs 2nd years in the past decade you see that we basically have a problem keeping OC’s not named Mike Gundy. I think holding on to an OC for 3+ years shouldn’t be that hard, but most OC’s want to be head coaches and 3 or 4 years with a good program seems to be too much to ask of them.

We should all be immediately drawn to the fact that a second year is not a sure-fire improvement. The number of seniors leaving, injuries, and quality of incoming recruiting class will of course affect the next year. Recruiting is one area where we expect a second year OC to do better. We expect a better recruiting class and more guys that he wants, compared to guys he has inherited. The reports we have heard summer camp all mention that this year’s crop of recruits is much more athletic and more game ready than previous years. My biggest hope is that the Freshman are not only more game ready but that they all fit Yurcich’s scheme.

Next I asked myself - who was our best OC over the past few years? Instinctively I will always say Holgorson.  He is the reason people respect OSU’s offense. If it was not for Holgorson’s year at OSU we may have never picked up the Air Raid at all and Monken may not have had the success he had in 2011.  Even if 2011 was better than 2010 we owe that success to Holgorsen in my book.  So, let's look at the best overall:

(TD numbers are average per game)

I did not see that coming. Gundy!? Really? Well, let’s look back at that year - It was Les Miles/Gundy’s second year. They doubled their rush TD’s as mentioned earlier, were quarterbacked by Josh Fields who threw an very respectable 31 TD passes, and oh, they beat OU. That sounds like a pretty great year to me but the PPP mark is still a surprise.

Here is a chart with every stat normalized against Holgorsen’s numbers. I chose Holgorsen, because like I said before, I always think of him as the best OC.  (Note, it says Holgy on the chart because I think that if we were friends that’s exactly what I would call him and he would be really annoyed by that. That’s what imaginary friends are for, right?)

How to read this chart: Take a coach and a stat, say Fedora PPP. It reads 50%, meaning in Fedora's first year, he only reached 50% of Holgorsens's PPP.  Monken however, had 110% of Holgorsen's PPP total. Holgorsen’s stats may not seem very useful on this chart since he is at 100% for everything but if you compare him to the others, you see that his  numbers were quite good.  His Air Raid philosophies stayed around through the Monken years for that very reason. 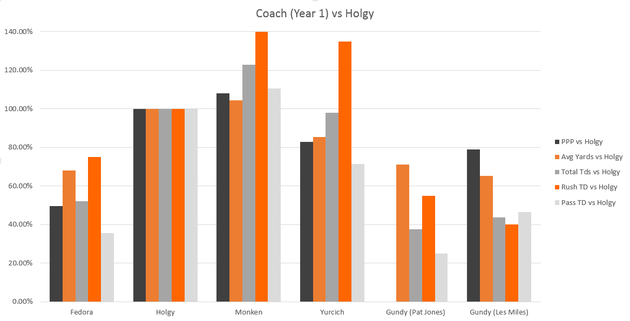 The 2013 season under Yurcich’s was about 80% of the PPP production of Holgy.  From what I can see here, a repeat of last year’s stats would keep his job but not have him poached away by another program. It’s going to take blowing big games or a massive dip in production before we see Gundy take over the play calling duties or hand them to someone new.

How should short Yurcich's leash be?

After comparing 2013 to the other years, I can see that Yurcich did not do bad in 2013.  That is my biggest takeaway here. I complained a lot last year about Yurcich. I hated his play calls and I felt like he didn’t teach the WR’s a thing about blocking for their fellow WRs. It was obvious to me that he was clueless about picking a QB, and he had no idea how to fix our run game.  But when it comes down to it, Yurcich did a good job. The macro view of the season is proof that the offense was good.  The offense was in each of the final 3 games and blew out Baylor. Our problem was that we expected to be better than 'good'. We expected the 2013 offense to be great.

Given that Yurcich was decent in 2013 and the number of Freshman on OSU's squad this year, I would say Yurcich's leash will be pretty long.  Gundy and Company see that Yurcich did a good job and will allow him to continue doing so.  A loss to Florida State will not force Gundy into taking over play calling duties. Even a loss against Texas Tech shouldn't do that.  The only thing that will make Gundy (and fans) loose faith in Yurcich is terrible play calling, which even Gundy has a say in during the game, and not adjusting as the season moves on. As long as the mistakes happen early in the season and then get fixed as time goes on, Yurcich will be around in 2015.

When mistakes happen (and they will) they will easily be attributed to young players. Even if OSU loses multiple games before November, it will be hard to call for Yurcich's head.

From what we all see, this team can be great or terrible.  Rebuild, reload, fall flat on their face, and everything in between. Nothing is really out of the cards. Kyle Porter at Pistol's Firing also sees the positive side of things and even suggests that we should buy stock in Yurcich. He believes that there is room for Yurcich to grow. He also shows that Yurcich improved year over year at Shippensburg.

What if Yurcich does exactly what the past OSU coaches have done? What would that look like? Here is a simple table showing Yurchich's first year, the average change each OSU coach experienced from year 1 to year 2, and how each change would affect Yurcich's stats.

This is my projection for Year 2 under Yurcich. Slightly worse Pass completion. More Points Per Play, touchdowns, and total yards.  Looking at the ‘Best Overall’ table above this would slot 2014 in between 2010’s 11-2 performance and 2008’s 9-4 season. So let’s say that means another finish of 10-3.