Oops. The Oklahoma Athletics official Twitter account sent out a picture of Joe Mixon apparently attending a team activity. You know, that thing he was specifically suspended from doing.

Share All sharing options for: Oklahoma RB Joe Mixon Suspended From All Team Activities... Kind of.

Oklahoma running back, Joe Mixon, pleaded "not guilty" to a charge stemming from an incident in July when he allegedly knocked a female victim unconscious. Consequently, he was suspended from the Oklahoma football team including all team activities for one year, but allowed to remain on campus and attend school.

In less than two months it appears that Mixon may have violated that suspension. A photo tweeted out on the Oklahoma Athletic's official Twitter account seemingly showed the freshman running back attending the inaugural RAH! Rally with the football team on Thursday night. 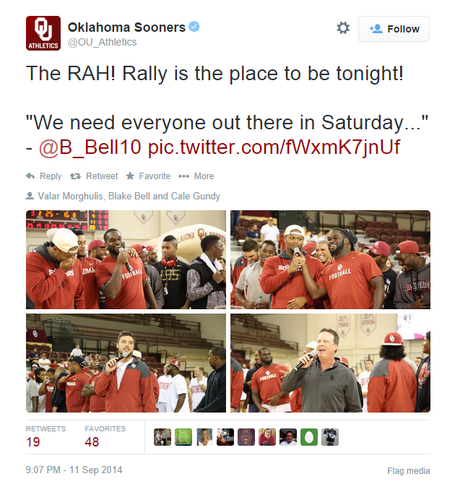 The question is whether or not the RAH! Rally is considered a team activity. The description on the official website for Oklahoma Athletics seems to indicate that it is.

However, according to an OU spokesperson the RAH! Rally is voluntary, and therefore not a "team activity".

"My understanding of ‘team activity’ is something that’s required," said OU spokesman Pete Moris via the Oklahoman."This is not an event where anyone was required to be there. It was a voluntary student event."

Official team activity or not, a second photo also appears to show Mixon attending more in the capacity of a football player, than that of a regular student.  No word yet on what, if any, further consequence may come if his attendance was indeed a violation of his suspension. 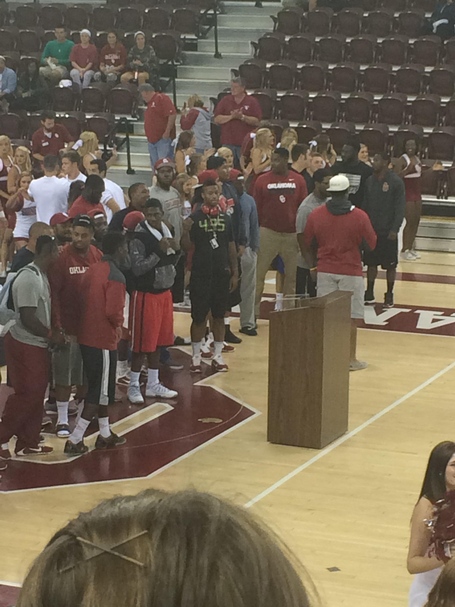