Five Reasons Tulsa Should Replace Texas Tech in the Big 12

Since firing The Pirate, Texas Tech has regressed to the point a conference swap with another perennial powder-puff should be considered. The upside is bigger than you might expect. And no, this isn't a serious proposal.

Share All sharing options for: Five Reasons Tulsa Should Replace Texas Tech in the Big 12

Since the firing of The Pirate nearly five years ago, Texas Tech and the University of Tulsa football programs have essentially become synonymous with futility. As peers in hopeless impotence, they should swap conferences for a number of reasons; five of which are outlined below. This may sound like an overly sensational lede, but let's get weird for a moment and consider the relative merits each program contributes - or might contribute to a fictional Big 12.

Perhaps surprisingly, Tulsa and Texas Tech share many similarities.  Both programs have been steadily trending downward in wins and conference prestige.  Both harbor an Oklahoma State inferiority complex. Both programs load the schedule with the likes of New Mexico, Rice, and SMU, and both colleges are (at least) the third choice in their respective states. Even "Huffy", Tulsa's mascot, has more in common with the plains of Lubbock than most realize:

By simply adding dust, the Golden Swirly magically transforms to represent Lubbock. "Dirty"1, as I call the new creation, perfectly captures the essence of Lubbock and all things Texas Tech.

Given these similarities, here are five reasons the University of Tulsa should replace Texas Tech in the Big 12:

Assuming for a moment the rest of the league was on board with the idea, I really would miss this guy. 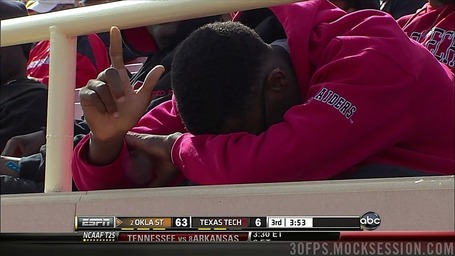 And the Ginger Kid:

To say nothing of the infamous bell boy or uber-basketball fan who introduced himself to Marcus Smart (see #3 above).  But now that Oklahoma State has copied and improved every worthwhile Texas Tech "innovation", it's time to discard the empty husk that is their football program in favor of a more Oklahoma-centric league. Let the the Blue Raiders establish a new rivalry with the Red Raiders while Oklahoma and Oklahoma State benefit from an additional "home" game each year.