This is going to be a stressful season.

It was the usual result between OSU and the Red Raiders.

And another Cowboys victory.

The Pokes have now downed Yosemite Sam 6 straight by an average score of 47 - 22. In fact, this was the most points scored by Tech since their last win in 2008. This was the Cowboys lowest output since putting up 34 in 2010.

It didn't look good early, as Davis Webb and the Red Raiders carved up the OSU defense, torching the young back 7. The defensive line couldn't generate any pressure, and the Cowboys did a poor job tackling in space.

Dropped throws and timely penalties helped slow them down long enough for Daxx Garman to find his range and start dropping 40-50 yd dimes to Ateman and Washington. Bigfoot ended up 17-31 (54.8%) for 370 yds (21.8 per completion!!!), 4 TD's (33, 39, 47, 50) and 2 INT's. The intermediate throws were a bit dicey until he seemed to settle down a little in the second half. The last bomb was what we've been calling for all season...chuck it 50 yards and let Tyreek Hill run under it.

All these numbers would have been higher if not for some drops, none more horrible than Ateman's in the 4th that would have probably been another TD. Despite that whiff, Ateman led all OSU receivers with 6 catches for 130 yards. He even made ESPN's Top 10 Plays of the Day.

While the emergence of Garman's deep ball has seemed to help Ateman realize some expectations, nobody has thrived more than James Washington. With his 3 catches for 87 yards (2 TD's, 29 ypc), he now has 4 receptions over the last two games for 120 yds and 3 TD's (yes, that's 30 ypc). If not for a very questionable offensive PI call in the 4th quarter, Washington would have had another 70 yds and another TD.

It's clear that if teams continue to play man coverage on the outside, OSU has decided to air it out for some wide outs that have clearly shown the ability to abuse undersized CB's. Throw in Tyreek's streak from the slot, and now defenses can't sell out safeties over the top.

We'll even give Ben Grogan some love, as he drilled a 42 yd FG that made the lead a little more comfy.

The running game was somewhat effective, pulling down 158 yards on 42 attempts (3.8 ypr), but it was obvious that a spotty offensive line was going up against a defense committed to something better than what they did against Arkansas. The perimeter running game is non-existent, which is bizarre given the presence of Tyreek Hill.

On the flip side, this was a down performance for the defense. The Red Raiders had two 100 yd receivers (Marquez & Grant), and they struggled to tackle in space. Injuries didn't help, as Lampkin and Stevens both left the game early. The defensive ends found some traction in the second half, causing two fumbles, one that resulted in one of the stranger ricochet interceptions we'll ever see.

All in all, it's a win, but we saw sloppy play on both sides (the teams combined for 287 yards on 26 penalties). Now the Cowboys have a clear shot at 5-1 before traveling to TCU.

We need to prepare ourselves, because for this team just about all the options are in play once they get past Kansas. I can say with confidence that they won't go 0-6 or 6-0,  but everything in between is on the table and it's going to be very stressful.

#okstate Mike Gundy acknowledges this as his favorite stat: In its last 25 meetings with opponents from the state of Texas, OSU is 22-3.

Now, for the chrome domes.

They were the best I've seen. Solid move trolling the fans and players, as we just about rebelled when OSU came out in the white with current OSU insignia. They slipped back to the locker room where the new helmets were waiting, and they were a hit. 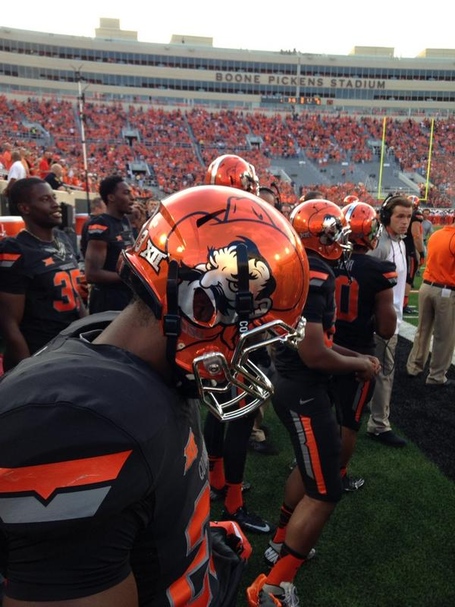 Here are a few highlights courtesy of ESPN...