Every year, the biggest regular season high school football game inside the city limits of Norman is known as the Crosstown Clash. Played at Gaylord Family - Oklahoma Memorial Stadium, the battle between the two high schools has raged on since 1997. Recently, the series has been dominated by Norman North, and last night was no different thanks to the play of John Kolar.

Recently moving up to 77th in the ESPN300, Kolar has established himself as the #2 pocket passing QB prospect in the country. However, the rapid rise in the local and national recruiting scene is both shocking and exciting. Going into the season last year John was virtually unknown, riding the bench behind the talented David Cornwell. Midway through the the season, however, Cornwell suffered an injury, and Kolar was thrown into the starting role and never looked back. 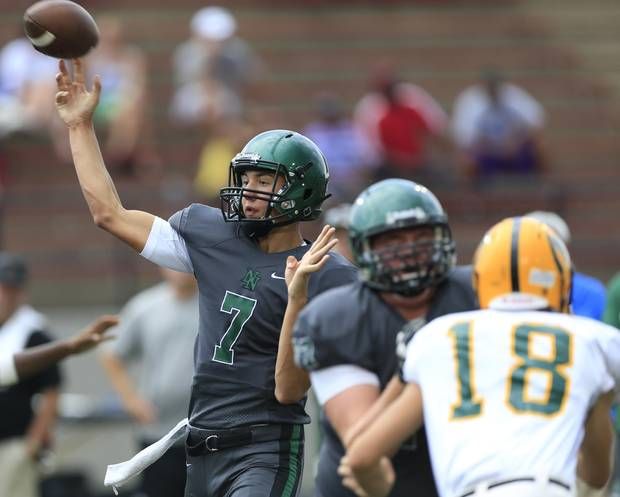 Norman North was the heavy favorite going into the rivalry game, but anything can happen in the Crosstown Clash. Therefore, it was great to see Kolar orchestrate a 24 point win, leading the Timberwolves with the following stat-line:

Those are pretty impressive numbers, especially when you consider he accomplished that feat with unproven receivers. Kolar looked extremely sharp, and many of his incomplete passes were drops from the receiving core. His deep ball looked like it belonged in college as he connected on TD passes of 48 and 78. Needless to say the future Cowboy managed his offense like a veteran.

I usually don't let high school games get me too hyped up for incoming players - but something is different about Kolar. His performance seemed almost effortless, and if that can translate to the next level, OSU is going to have one hell of a quarterback competition next spring, especially if JW Walsh returns.

Next Up In Recruiting News