Let's take a quick look at how former Oklahoma State Cowboys did in Week 1 of the NFL season.

Share All sharing options for: Oklahoma State Cowboys in the NFL: Week 1

THE NFL IS BACK! I know here at Cowboys Ride for Free we mainly talk about college sports, but as I mentioned last week, "once a Cowboy, always a Cowboy", which means that we finally have some real stuff for you in this week’s Cowboy’s in the NFL post!

Dan Bailey (Dallas) – Bailey hit one field goal from 29 yards, and made both extra point’s in a Cowboy loss.

Dez Bryant (Cowboys) – Bryant hauled in four balls for fifty five yards for Dallas. Despite a bone crushing hit, he is expected to play next week against Tennessee.

Perrish Cox (49ers) – Cox had a HUGE game for a 49ers defense that by itself saved multiple fantasy football teams. Cox had three tackles and one interception. 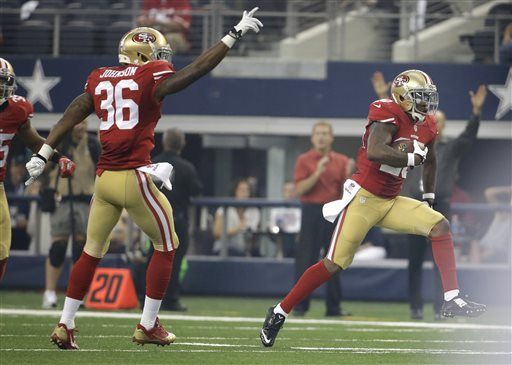 Justin Gilbert (Browns) – It was a rough week for Gilbert. He struggled against a talented Steeler receiving group. Despite his seven tackles it sounds like the former Cowboy may get less playing time unless he elevates his play.

Corey Hilliard (Lions) – Hilliard did not start in the Lions big win on Monday night but he did get some playing time. Only thing to note is that he left the game in what appeared to be a foot injury.

Charlie Johnson (Vikings) – The former Cowboy lineman started in a HUGE Viking win this week. He helped lead the way to another great week for Viking running back Adrian Peterson.

Orie Lemon (Cowboys) – DNP (still has the best name on the list).

Russell Okung (Seahawks) – Okung started his 46th game for Seattle this week. He helped lead them to a big win against the Green Bay Packers.

Tyler Patmon (Cowboys) – DNP but may get playing time soon if the Dallas defense doesn’t learn how to stop any NFL offense.

Antonio Smith (Raiders) – Smith had three tackles and no sacks in a losing effort to the Jets.

Brandon Weeden (Cowboys) – DNP (should have)

Kevin Williams (Seahawks) – Williams reigned in one tackle and also knocked down a pass for the Seahawks.