Oklahoma State bounced back in a big way against the 20th-ranked Baylor Bears on Tuesday in Stillwater.

Share All sharing options for: Recap: Pokes Knock Off #20 Baylor 64-53

The Oklahoma State Cowboys welcomed the #20 Baylor Bears into Stillwater on Tuesday for one of the more entertaining games of the season. In a game that was essentially a must-win for the Cowboys, they did not disappoint. The Cowboys came in as 4-point favorites and made the best of that. The Cowboys got the best of the Bears with an entertaining 64-53 win. It was quite a way to Remember The Ten.

As the first half went on, it looked as if the Cowboys were going to get ran out of the gym. Baylor had a 7 point lead early in the half, and the Baylor zone defense made the Cowboys look lost. after falling down 13-6, the Cowboys stormed back and closed the half on a 16-4 run that made for one of the more entertaining halves of basketball that the Cowboys have played this season. The run was propelled by quick ball movement, good shot selection, and high shooting efficiency. After closing the half with a 30-21 lead, the Pokes would not look back.

The second half of this matchup can be described in one word: shootout. For what seemed like 10 possessions in a row, the Cowboys would give the Bears what seemed to be a death blow, only to have the Bears answer right back. However, the credit needs to go to the Cowboys for their ability to keep Baylor at arms distance for the closing minutes of the second half. Phil Forte's ability to break a zone defense's back is the biggest weapon that Oklahoma State has, and it is going to need to stay that way if the Pokes want to keep winning these games.

Role players stepped up. If you read the pregame primer, this was my biggest key to the game. Tavarius Shine was a huge difference-maker. OSU desperately needed someone to emerge from the bench, and Shine provided that lift with a career-high 11 points and 3 rebounds. Jeff Newberry also came in with some much-needed assistance with 10 points and 4 rebounds.

Player Of The Game 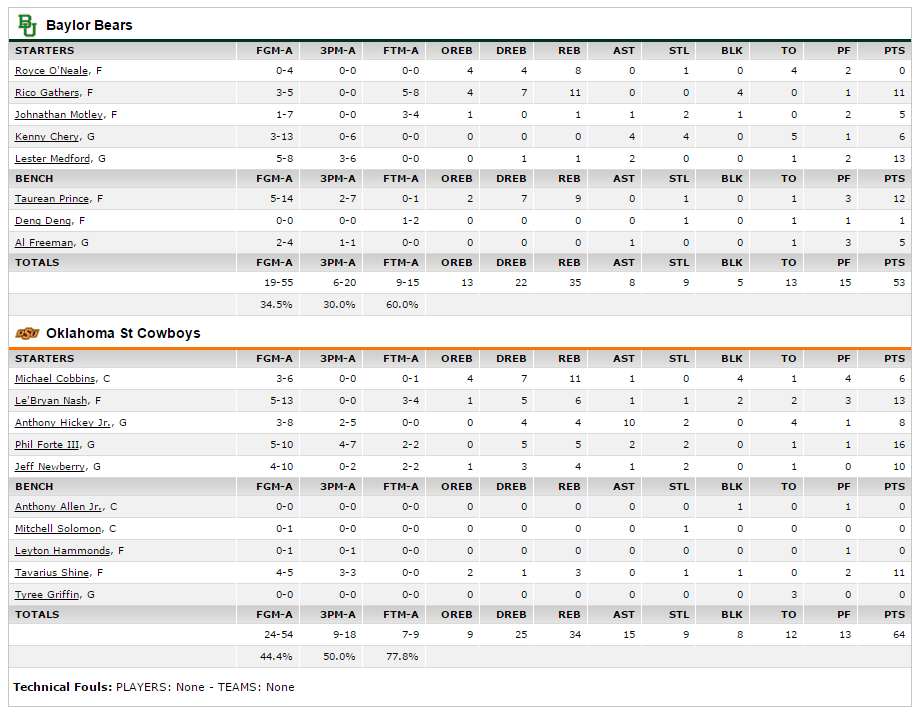 This win could be pivotal in terms of OSU's chances at making the NCAA tournament as every single win they get is valuable, especially against ranked teams.

Next up for the Cowboys: Bedlam (Saturday, 7 P.M. CST)