After a promising first half for the Cowboys, the Sooners imposed physical dominance and ran out of Stillwater with a 64-56 win.

In a game that was a must-win for Oklahoma State, the Cowboys found themselves at the wrong end of things, losing to rival Oklahoma 64-56. The Cowboys were in control for most of the first half, and none of the second half. This loss could end up being a very big loss in terms of OSU's tournament chances.

As is with any rivalry game, both teams came out with energy. Oklahoma State rode hustle plays, good shot selection and high shooting efficiency to their largest lead of the game, 20-9. LeBryan Nash got in early foul trouble, and was sat at the 15:41 mark, and didn't see the floor for the remainder of the half. Elevated play on both ends from Anthony Hickey was a huge boost for the Cowboys in the first half with 8 points and 4 rebounds. Phil Forte led all scorers with 11 points.

Allens reaction is so epic in this vine from @OSUAthletics - https://t.co/B6l91zFYba

After a very promising first half, the thought of a Bedlam blowout was soon lost after OU opened the half on a quick 5-0 run, and OU really didn't look back from there. After the Sooners put themselves at arms reach in the middle of the second half, they rode Buddy Hield's unbelievable five minute stretch of 12 points. Every time the Pokes tried to claw in it, OU would run a long possession and break the back of Oklahoma State's defense. Oklahoma State was outscored 39-24 in the second half.

Oklahoma State may have faded in the second half, but the officials were more than happy to fill the void. The whistles came often, highlighted by this 'charge' on Le'Bryan Nash. 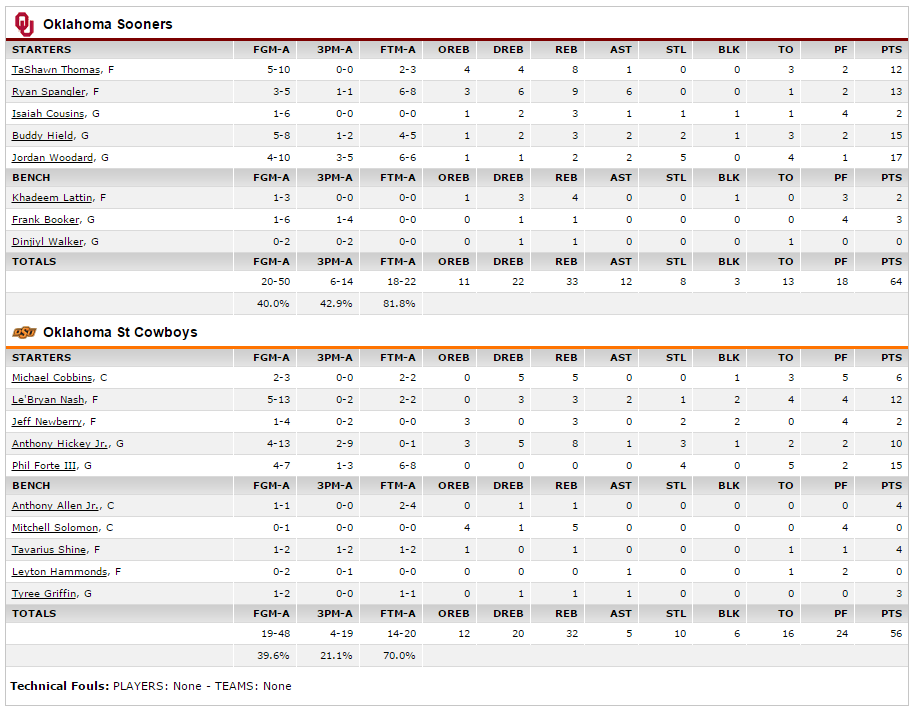