In the last Chalk Talk of the season, we will look at the Oklahoma State Cowboys' offensive performance in their 30-22 victory over the Washington Huskies.

There were a lot of components to the Cowboys' success last Friday, and in this post, we will look at some of the things that they did best.

It is easy to get hyped about James Castleman's performance, but let's not forget about Saturday's unsung heroes of the Cowboy offense, Blake Jarwin and Jeremy Seaton. These two players might not get the flashy numbers, but their contributions go past the stat sheet. Both players were used all over - as fullbacks, upbacks, or even tight ends. They were even occasionally flexed out wide in a Blake Jackson-esque type of role, but unlike Jackson, these players can catch. Jarwin and Seaton had a combined five catches for 58 yards, and showed their grit and toughness making some tough grabs on critical downs. This blue-collar role on the offense seems to be here to stay. The good news? The Cowboys finally have the personnel to do it. Players like Jarwin, Seaton, and Veatch will all be back next year, as well as other players of the same position.

Well, well, well - just when I thought I've seen everything. James Castleman, part defensive lineman, part punter, part fullback, part pass-catcher, made his presence known Friday with one catch for 48 yards, one rush for a touchdown, three solo tackles, and a sack. The 298-pounder showed nimble feet and commendable ball skills in his new offensive role.

His first career offensive touchdown came on the Cowboys' first drive of the game, as the offense unveiled their new WildFat formation on the goal line.

His second-biggest play came in the fourth quarter, which leads us into our next segment.

The Pokes used some signature Bowl Game trickeration against Washington, but the play that we will remember occurred at a critical time late in the game.

Both Ofa Hautau and James Castleman took part in the Pokes' "Lahi" package in short-yardage situations. For those of you who haven't already learned, or for those who are not bilingual, the word "Lahi" means big in Polynesian. The play had plenty of big, with big bodies and big success. 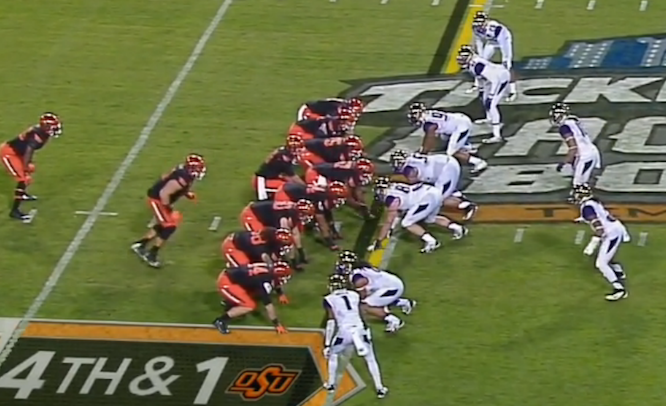 The Pokes used the wrinkle to convert when they needed to, and sooner or later they were going to come out with a pass. However, when they trotted out the "Lahi" on third-and-two in the fourth quarter, no one would have thought that James Castleman would be on the receiving end, not even the announcers.

But oh, how we all were wrong.

Castleman snuck out of the backfield and took the flat pass almost 50 yards, completing what will be one of the most memorable plays of the season.

This was my second-favorite gadget play that the Pokes used in the game. This is not the first time the Cowboys have used a throwback pass. In fact, they have used some type of quarterback throwback exactly once per year since the 2012 season. Here, the Pokes set up the play perfectly, using a simple run/swing option a handful of times:

After setting the play up, the Pokes turned to their gadget play late in the first quarter:

Rudolph's 20-yard reception sparked a quick OSU touchdown, giving the Cowboys a 14-0 lead over the Huskies.

OSU used additional wrinkles here and there, including a flea flicker, a halfback wheel route off of a jet play action (which was also used in Bedlam 2013), and some others. These were my two favorites, though, and you would have to be crazy to disagree.

Before getting conservative in the second half, the Cowboys mixed their play-calling up very well. They threw in a little bit of the old, such as the infamous pop pass:

with some of the new, like their addition of the slip screen:

In addition, the Pokes also showed a new cut blocking scheme, as well as some new shifts and motions, which was ironically brought to the mainstream by UW head coach Chris Peterson while he was at Boise State. Yurcich admitted that they stayed vanilla in the second half, as to conserve their lead and chew clock, but the fluidity of his play-calling in the first two quarters was undeniable. In my opinion, Yurcich deserves to stay another year, and he will have the chance to show all of us what he can do with a good quarterback and a much better offensive line.

Well, it's been quite the season for the Cowboys, and it has certainly been fun going through it with you on Chalk Talk, all the way from the Florida State game up until now. I can't wait for what next season has to offer, as the team seems to be on the up-and-up. Until then, stay loyal to your Cowboys and, as always, Go Pokes!