We are green for the season, and it feels so good. I’m going to cut myself some slack on the Texas A&M and Oklahoma State lines that moved to -7 and -3 respectively on game day, which both pushed, giving myself a 5-1-2 record for the week. And for the season we are now 9-5-2 against the spread and 11-5 straight up. I doubt that I can go 5-1 again but I’ll try my best. Here are my picks 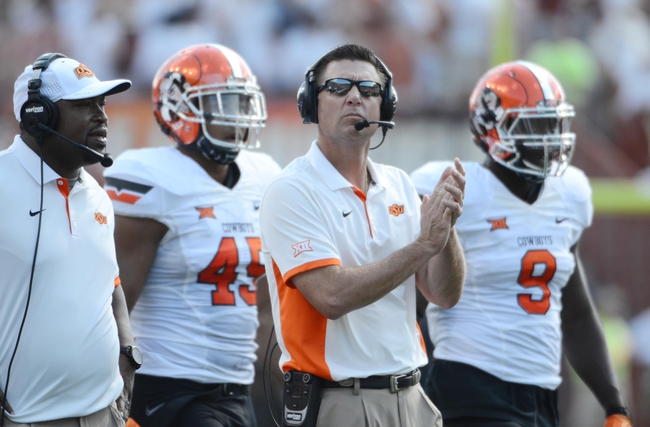 Oh what a week for the Oklahoma State Cowboys, winning a game that they had absolutely no business winning on the road at Texas. Now, the Kansas State Wildcats come into Stillwater fresh off of a bye week. I’m not sold on the OSU offense right now. After the first quarter where Mike Yurcich was not calling the plays, the offense struggled. Kansas State has played well in Stillwater recently. OSU has won the past two meetings at home by a combined 11 points. This K-State team won’t beat itself like Texas did last week. The Cowboys win in another nail biter.

The Aggies are a different team at home. The new Kyle Field is arguably the most hostile environment in all of college football. This is a Mississippi State team that is young and inexperienced outside of star quarterback Dak Prescott. According to Phil Steele’s list of returning starters the Bulldogs are ranked 121st out of 127 teams in the FBS returning only 9 starters. That’s just too much to overcome on the road in Aggieland.

Can someone please explain to me how Texas Tech is getting 17 points in this game? I feel like I’m robbing a bank with this bank a la Grand Theft Auto style. Points will be scored at a premium. The Red Raiders should’ve beat TCU last week if not for a miracle touchdown. Now they get a worse Baylor team in my opinion and 17 points. Not to mention that Tech nearly beat Baylor last year with a worse team. Take the points and possibly Texas Tech to win. I’m feeling a big upset this week in college football. It’s been awhile.

If Bowling Green can beat Perdue by seven on the road, than they can beat Buffalo by more than eight. I’m rolling with Bowling Green for the next few weeks until they lose a game. It worked last week so why not this week? I’m a big believer in this team. Lets go bowling with the Falcons.

Give me the most talented team in the country against an Indiana team that beat Southern Illinois by a point. The bottom of the big ten is worse than the bottom of your beer. I don’t need to say anymore.

Since a six point loss to TCU in week one, Minnesota has been terrible. The Gophers beat Kent State 10-7 and Ohio 27-24. Ugh that’s ugly. And in week two it took Minnesota overtime to beat Colorado State. Northwestern wins in a low-scoring defensive game.

When the number six team in the country is an underdog I’m most likely going to bet it. This will be a sloppy game that might be played in Hurricane Joaquin. Clemson struggled last week defeating Louisville on the road by three. It’s just really hard to pass up Notre dame as an underdog. I learned my lesson the hard way betting against Notre Dame as a dog at home against Georgia Tech. It’s always nice having the luck of the Irish on your side.

Oregon has been bad this season. But Colorado has been worse. Here’s your weekly reminder that the Buffaloes lost to Hawaii. Oregon lets some frustration loose in Boulder.