Oklahoma State traveled to Waco on Monday for a showdown between two ranked Big 12 teams, and nabbed their second straight road win, and third straight against a ranked team.

What can you say about the job that Travis Ford has done with this team, other than bravo? Oklahoma State just grabbed their third straight win over a top 25 team, and their second straight win on the road against a top 25 team. This team is absolutely grooving, and understands what their coach asks of them. With the win, Travis Ford becomes the first coach in Oklahoma State history to win three consecutive games against Top 25 teams.

1st Half Summary: Both teams exchanged quality possessions early, and neither team found an edge. Baylor and OSU exchanged runs of 8 points a piece, and found themselves in good position to make this a two-half game. Baylor has done an excellent job of jumping on opponents early this season, and OSU did not let that happen. Baylor extended their lead to 33-25, their largest of the first half. Oklahoma State did not lay down, as the Pokes closed the first half on a 7-0 run to make it 33-32 at the break.

Taurean Prince was electric for Baylor, scoring 14 points off the bench. Le'Bryan Nash led all OSU scorers with 11, and Anthony Hickey went 3-4 from the 3 point line while all other players went 0-10.

The key to the second half was simple...

The Cowboys allowed Baylor to jump out to a quick 4-0 run and it looked as if Baylor was poised to take a grip on this game, but then Phil Forte happened. Forte completed a 4-point play and then hit a 3 on the very next possession to give the Pokes the lead. Here is that amazing 4-point play from Forte.

Oklahoma State got all the way out to a 54-43 lead, their largest of the game with 12:18 left. Baylor played stagnant on the offensive end and ended up crawling back to within 5 at the 5:40 mark. The closest Baylor got to the Pokes was 3. Oklahoma State would put the clamps down on defense, and ride out a 74-65 win in Waco. 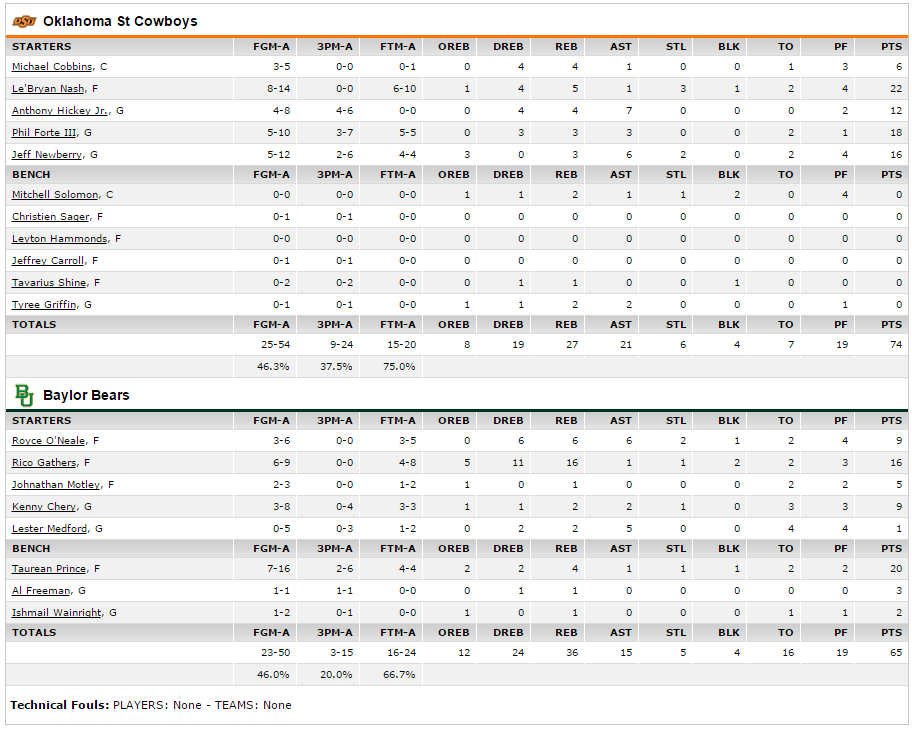