Nate's Eight - Oklahoma State should take care of business but what about some other games around the country?

We're starting a new series called Nate's Eight to help everyone hopefully do well this week in all sorts of ways. Here's my eight picks for week three

Share All sharing options for: Nate's Eight - Oklahoma State should take care of business but what about some other games around the country? 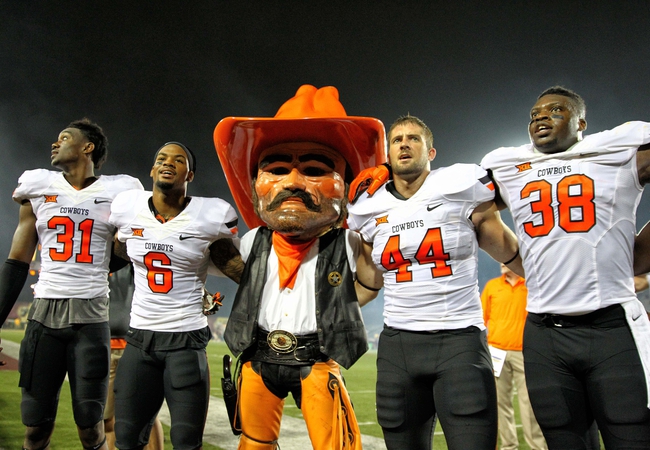 After a good performance on the road against No. 20 Arizona, UTSA returned home to the Alamo Dome and forgot to show up. The Roadrunners lost 30-3 at home against a good Kansas State team. Oklahoma State is without a doubt a better offensive team than the Wildcats. The Cowboys shouldn't have a problem scoring points against a team that returns only three starters on defense. UTSA is very inexperienced as a team. They rank 127 in FBS with only five returning starters on both sides of the ball. Look for a very talented OSU defensive line to expose a young UTSA offensive line. In last years game the Pokes rolled to a 43-13 victory against a more talented and experienced Roadrunner team. Yes, I know OSU has struggled, but with conference play just a week away the Cowboys will show some urgency. Swallow the 25 points as OSU rolls. OSU is 0 for 2 against the spread this season. They have to cover at some point right? The third time is the charm.

This is not your typical Temple Owls team. The Owls are coming off a huge in state win against Penn State and have been impressive in the early goings this season. They followed that up with a 34-26 victory on the road at Cincinnati. Temple picked up the most votes amongst teams not ranked in the AP poll. This team is not a joke. The Owls also return the second most starters in the country with 19 returning. Look for Temple to impose its strong defense against the Minutemen. UMass on the other hand is struggling, coming off of a 48-14 loss to Colorado, a team that lost to Hawaii in week one.

Ohio State was held to just 38 points by Hawaii last week but did pitch a shutout against the Rainbow Warriors. You get a better defense and a team that will score more than zero points in Northern Illinois. I'll take the pesky MAC team as a big underdog. Ohio State will win comfortably but 35 points is just too much.

Everyone is off of Auburn right now. So give me Auburn. Yes I know they almost lost to Jacksonville State last week. Vegas always knows something that we don't. LSU struggles to score points. Southern Miss nearly scored the same amount of points on Mississippi State as LSU did last week. Gus Malzahn will have his team ready to go for its SEC opener.  Seven points is just too many with a struggling LSU offense that kicks lots of field goals. LSU wins but take the points.

The injury bug has hit Notre Dame hard in the first two weeks of the season. Starting quarterback Malik Zaire is out for the season with a broken ankle. Starting running back Tarean Folston is also lost for the season with a torn ACL. Did I mention that Notre Dame is coming off a miraculous emotional victory against Virginia last week? Teams coming off dramatic victories often struggle the next week. Georgia Tech brings its high-powered triple option offense into South Bend. The Yellow Jackets have scored 19 touchdowns and 134 points in just two games this season. Combine that with only a week to prepare for the triple option. Notre Dame is in trouble and is playing with a backup redshirt freshman quarterback DeShone Kizer. I don't love this pick, picking against Notre Dame at home, but Tech sneaks out with a close win.

I get four points with Colorado State this week. I'll take it every time. This is by far my favorite pick of the week. Rivalry games are always close. Colorado State has won two of the last three Rocky Mountain Showdowns, and has lots of momentum heading into Denver.  CSU is a program on the rise and Colorado is falling. The Buffs had an early stumble in week 1 losing on the road to Hawaii. Colorado State nearly beat a talented Minnesota team last week before falling in OT. I get four points and I haven't mentioned the nations leading receiver in yards in 2014 in the form of Colorado State's Rashard Higgins who is expected to return from an ankle injury. The Rams are 10-1 against the spread in their last 11 non-conference games. How can you not take CSU? Roll with the Rams.

Oregon is returning home after a tough loss to Michigan State. That means one thing. The Ducks will be angry. Georgia State is arguably one of the worst teams in FBS. In just there third year among the Division I ranks, the Panthers will be outmatched in Eugene. Georgia State opened the season with a three-point loss to Charlotte. That should sell itself right there. Don't be scared of the 46.5 points. Go with Oregon.

I love UCLA as much as anyone. Freshman sensation Josh Rosen is going to be a stud at quarterback. BYU arguably has the two best wins in college football thus far at Nebraska and at home against Boise State. Both have come in incredible fashion. This team has incredible resolve and heart. Can the comeback Cougs do it again or will BYU's luck run out? UCLA only beat Virginia at home by 18 and I get a better BYU team and 16 points. That's way too many to pass up on. Expect a closer game than 16 points Saturday night in Pasadena.