Last week we went 4-4 (6-2 SU) with my favorite pick Colorado State winning against the spread. It was a rough start but things could have been worse. At least I learned a lesson. Never take a team favored by 46 points. (thanks Georgia State) Hopefully this week will be different and we can get into the green. Here are my picks for Week 4. 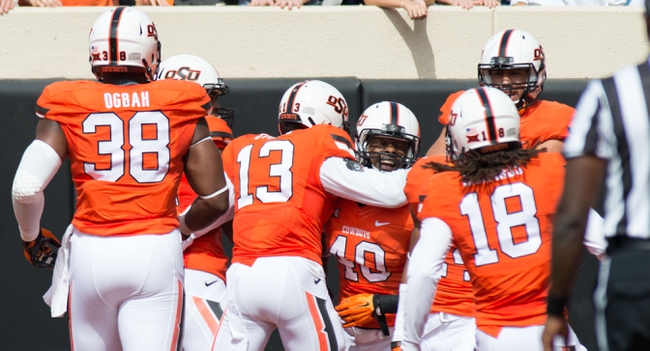 Before the season started, Oklahoma State opened as a three-point underdog in this game. Texas is coming off a demoralizing 45-44 loss against Cal, in which UT missed an extra point to tie the game with just over a minute left in regulation.  Look for the Longhorns to start slow. Texas may have found its quarterback in Jerrod Heard if you haven't heard, but expect Oklahoma State to feast on the inexperienced qb. OSU is coming off a 69-14 romping of UTSA. Look for OSU's defense to be aggressive and force more turnovers. The Cowboys defense will be playing with boosted confidence after forcing seven turnovers last week. The Longhorns struggle on third downs, ranking 111th in conversion percentage. Give me the team with more talent and a proven offense. The Pokes have won the last three meetings with the Longhorns in Austin. I expect them to make it four. I get a better offense, a better defense, and a more experienced team. Don't overthink this one.

BYU is getting four and a half points against Michigan? I know this game is at the big house, but BYU has proven it can compete and win big games on the road. The Cougars went into Nebraska in a hostile environment and won. Last week they had a 10-point lead in the fourth quarter against No. 9 UCLA in the Rose Bowl before losing 24-23. This team can play with just about anyone in the country. BYU is also 2-0 as a road underdog against the spread this season. They covered for us last week and there's no reason that the Cougars can't cover again. Give me the points all day.

Last week I learned the hard way that you never take a team who is reeling. Auburn was blown out by LSU. This is the same scenario with Arkansas. A pre-season top 20 team that was simply overrated. Arkansas is coming off of back-to-back losses to TOLEDO and Texas Tech. (Props to the Red Raiders last week) No disrespect to Texas Tech but if the Red Raiders can beat Arkansas by 11 points on the road, than A&M should have no trouble covering the eight points in what essentially will be a home game at AT&T Stadium.  Meanwhile, the Aggies are rolling into Arlington with an impressive win over Arizona State in Houston. Look for Kyle Allen in company to put up a lot of points. Not to mention I get a much improved Aggie defense from last year. This may be my favorite pick of the week. I'll take A&M big. I feel like I'm stealing money here. I wonder who Kliff Kingsbury is picking in this one.

Eighty-one and half points, that's it?? May I please remind you that TCU covered this years point total of 81.5 single handedly by scoring 82 last year against Texas Tech. I'll take the over in a heartbeat. Texas Tech's defense comes in ranking 112th in total defense after facing opponents Arkansas, UTEP, and Sam Houston State an FCS program. This is a Tech defense that gave up 45 points to a Division II School. With all of that being said Texas Tech still has a legitimate chance to keep this game close and possibly win. If you like defense you may want to stay away from this game. It's also a TCU defense that gave up 37 points to SMU and will travel to Lubbock without six starters. Points will be scored at will. Don't be scared of the 81.5. Take the over.

Last week we went with Northern Illinois as a big underdog at Ohio State and it paid off. Michigan State is coming off a lackadaisical 14-point win against Air Force in which they only scored 28 points. I get a better defense in Central Michigan and an offense that knows how to move the ball, as we all witnessed in the Oklahoma State game. I'm 1-0 with MAC schools as big underdogs so why not go with the Chippewas.

PS: What does this say about OSU being a 24-point favorite on the road against CMU and MSU the No. 2 team in the country only favored by 28 at home...

This is a matchup nightmare for Perdue. The Boilermakers enter Saturday's contest with the nations 88th ranked defense. Bowling Green comes to town with the second ranked offense in the country. The Falcons wont be intimidated haven already defeated Maryland this season and Indiana last season giving them consecutive seasons with wins over Big Ten programs. Matt Johnson, Bowling Green's Quarterback leads the FBS in passing yards and passing touchdowns. This is a team that put up 30 points against a SEC defense in Tennessee week one. Did I mention that Perdue is starting a redshirt freshman in David Blough at quarterback who is starting his first collegiate game? Everthing points to Bowling Green winning and covering. Take The Falcons to bowl over Perdue.

I get Duke, the nations eighth best defense and eight points at home against a team that runs the triple option. Duke is a very sneaky team this year. Eight points in both teams ACC opener is simply too much value here. I made my mistake of buying into Georgia Tech last week at Notre Dame. Georgia Tech struggles but wins.

I’m getting a top 20 team in Utah and double-digit points. We took BYU last week as a ranked road team that was a  double-digit underdog and it paid off. Oregon quarterback Vernon Adams is banged up. Adams is questionable for Saturdays matchup with a broken index finger on his throwing hand, which he suffered in week one. Oregon also is giving up a lot of points. The Ducks rank 105th in the country in total defense. Twelve points is way too many for a PAC 12 opener in a ranked matchup. Utah has also looked impressive this season knocking off Michigan in week one. Take Utah and the points in what has the makings to be a close game.