The Big 12 needed a strong showing in this year's March Madness and so far so good.

Over spring break I was lucky enough to go on a cruise for vacation. Of course with my luck March Madness was taking place and I was in the middle of the ocean with all of the games ongoing. I was going to miss the two best sports days of the year.

Or so I thought. We were fortunate enough to find a tv and watch most of the games, including the Texas and Northern Iowa game. A group of Texas fans had gathered for a watch party on the ship. As the game was going down to the wire, a group of Texas A&M fans decided to stick around.

I found myself in the middle of something very entertaining.  We all know that UNI won the game on a half-court buzzer beater. The scene unfolding in front of me was mayhem. I'm still amazed with the games ending that no one had been punched. SEC chants soon erupted throughout the room. Now what Northern Iowa beating Texas on a buzzer beater has to do with the SEC is beyond me.

To be the country's best college basketball conference you have to win win when it counts, in March. After failing to place a team in last years Elite Eight, the Big 12 has responded with Oklahoma and Kansas both advancing with impressive wins. Oklahoma knocked out Texas A&M with a 77-63 win, which eliminated the SEC from the tournament. I really hope that Big 12 chants broke out after the game. The Big 12 ended up getting the last laugh over the SEC. Kansas defeated Maryland 79-63, extending the Jayhawk's winning streak to 18 games.

It's the first time that the conference has had two teams in the Elite Eight since 2012.

And yes there's still the potential for a Final Four showdown between the Jayhawks and Sooners on a neutral court with the winner advancing to the National Championship. Who wouldn't want so see Buddy Hield vs. Kansas one more time? Both games have been thrillers and of course we all remember the triple overtime game, in which Hield dropped 46 at Phog Allen. Kansas fans gave the kid a standing ovation.

The Big 12 would own half of the Final Four, and would seemingly re-claim the throne of college basketball's best conference once again. 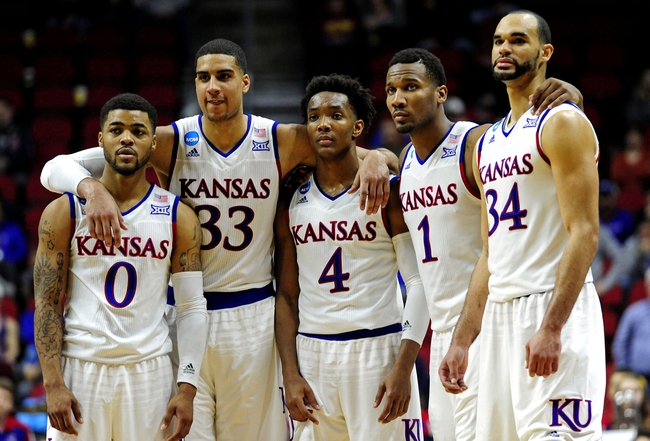 So as you can see the ACC and the Big 12 are the only winners among the power five conferences this year. The Big 10 and the SEC combined failed to get teams into the Elite Eight for the first time since 2008.

But the Big 12's work isn't done just yet. If OU and KU both lose then the conference's hard work is all un-done. As harsh as this may seem, it's the nature of March and college basketball. Winning in college basketball is judged in March, period.

As an Oklahoma State fan this may be the only time that I find myself rooting for Buddy Hield and Oklahoma. But I'd definitely rather root for the state of Oklahoma and the best college basketball conference in the country over anyone else. The Big 12 needs to make a statement, now more than ever.

And to serve as a reminder for OSU fans: the Cowboys beat one Elite Eight team (KU) and lost to another by two points. The future is bright for Oklahoma State basketball, especially with new head coach Brad Underwood.