Baseball Recap: Cowboys Take One of Three Against Arizona State in Opening Series

The Oklahoma State Cowboys dropped a heartbreaker in the opening game of the series on Friday, but after after suffering a second loss in game two, the Pokes fought back and took the finale on Sunday!

Share All sharing options for: Baseball Recap: Cowboys Take One of Three Against Arizona State in Opening Series

There was a great deal of excitement heading into the No. 5 Oklahoma State Cowboys season-opening series against the No. 18 Arizona State Sun Devils. Those who watched on the live stream provided by ASU were able to see a lot of good things the squad, but ultimately the Cowboys fell short in the first two games before winning the series finale on Sunday.

Here's a brief look at each game of the series:

A little bit to my surprise, LHP Tyler Nurdin got the opening day start. Nurdin worked out of a jam in the first inning on his way to throwing three scoreless frames to start the game. The Sun Devils were able to manufacture a run on a Colby Woodmansee base hit that scored Joey Bielek in the fourth, Woodmansee would later score on a double by Dalton Dinatale making the ASU lead 2-0.

Leadoff hitter Corey Hassel had two hits, including a two-RBI double that scored Jacob Chappell and Jon Littell to tie up the game in the fifth inning. Newcomer Kevin Bradley had an RBI single that scored Conor Costello in the sixth inning that gave the Cowboys their first lead of the season.

From then on Trey Cobb was phenomenal, throwing 3 1/3 scoreless innings, only allowing two hits and striking out six Sun Devil hitters. I speculated that Cobb would be good in my bullpen preview, but good lord he was in a zone on Friday!

Blake Battenfield relieved Cobb and allowed a run to tie the game 3-3 in the eighth inning.

OSU was able to get multiple runners in scoring position with less than two outs in both the ninth and tenth innings, but was not able to plate any runs. In his two innings pitched, the only out that ASU closer Ryan Burr registered that wasn't a strikeout was a lineout by pinch-hitter David Petrino.

RHP Koda Glover threw a 1-2-3 bottom of the ninth, before allowing a walk-off home run to Woodmansee, the first batter of the 10th inning.

"We put ourselves in position to put a run across in the final innings only to come up a little short," coach Josh Holliday said to okstate.com.

That quote pretty much says it all.

For more on the game, check out Thomas Fleming's full summary.

Note: Donnie Walton did not start at shortstop due to a wrist injury.

RHP Jon Perrin started this one for the Cowboys and he didn't get much help from the start in this one. OSU made two errors in the opening frame, leading to an unearned run scoring. Bryan Case hit a two-run double in the second to give the Cowboys the lead, but it didn't last long as Perrin allowed three more runs in the second before being lifted in favor of RHP Tyler Buffett.

Buffett pitched well in relief, only allowing one run on two hits, in 3 2/3 innings on the hill. RHP Remey Reed was also impressive out of the bullpen, pitching three scoreless innings in his OSU debut.

Tim Arakawa had 3 hits on the day, Jon Littell, Hassel and Case each had two. In total, the OSU offense recorded 11 hits in this game, but they could not take advantage of oppurtunities with runners in scoring position, leaving 10 runners on base.

Just like Friday's game, the Sun Devil bullpen was able to pitch their way out of trouble and just like he did in the first game, Ryan Burr shut down the Cowboys in the late innings of this contest.

Burr showed really showed us why I was scared of him coming into this series.

OSU Player of the Game: Arakawa was a solid contributor with 3 hits.

This one had to really feel good for the team. After two straight losses that can be charged to missed oppurtunities, the Cowboys offense finally broke out for six run runs in the third inning of the finale, five of which were charged to Sun Devil starter Darin Gillies.

Corey Hassel and Gage Green started the inning with consecutive hit by pitches, followed by a Tim Arakawa double that plated the first run of the game. Dustin Williams then hit a two-RBI single in his first start of the season giving OSU a 3-0 lead.

Still in third, Kevin Bradley sacrificed the Cowboys fourth run across the plate, followed by a two-RBI double from Ryan Sluder to stretch the lead to 6-0.

LHP Michael Freeman started on the hill for the Cowboys, pitching three scoreless frames before the Sun Devils were able to plate three runs in the fourth inning.

Bradley kept the offense going in the top of the fifth, launching the Cowboys first home run of the season over the wall in right-center field, scoring two runs and making the lead 8-3.

Freeman was yanked with two outs in the fifth after allowing his fourth run of the day. However, he did register the longest start of any OSU pitcher this series.

Conor Costello plated the Cowboys ninth and final run of the game on single to left field in the sixth inning, making the lead 9-5.

Glover only needed nine pitches to retire the three Sun Devil hitters he faced in the last frame.

OSU Player of the Game: Kevin Bradley went 2-3 with 3 RBI's and a long ball.

I didn't expect Holliday's gang to go into the desert and win this series. Call me a pessimist, but I don't think it's realistic to go on the road and win a series against a ranked, warm-weather team like ASU in February.

Obviously, every pitcher has to shake off some rust to start season. I fully expect Jon Perrin to be at his 1st Team All-Big 12 form come the start of conference play. The bullpen will also get better as the season goes on.

Also, Koda Glover sure does look mean on the mound. I sure as hell wouldn't want to step in to face a guy that's 6-5 throwing 96, no freakin' way.

I'm going to keep say this, Jon Littell is going to be the real deal. The Stillwater-native made two great catches in one inning on Friday and then had three hits combined in the last two games of the series. We have a superstar in the making, just wait on it.

I also really liked what I saw from Kevin Bradley, who had at least a hit and an RBI in every game of the series. Gage Green and Tim Arakawa both had a great series as well, to no one's surprise, combining for 10 hits.

Basically, what I'm saying is don't overreact to this series loss. Yes, the Cowboys didn't look like the No. 5 team in the country this weekend, but it's still way too early to make any judgments. Just like in college basketball, preseason rankings don't have any value other than getting people to freak out three games into a 70 game season. 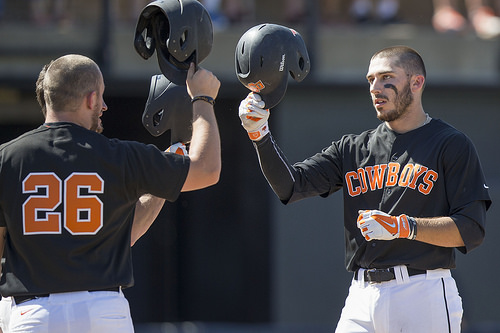