Oklahoma State extended it's streak of losing games they were favored in to three. This time the Cowobys fell victim to #PressVirginia at home on Saturday, 73-63.

Oklahoma State, after coming off an impressive three game winning streak, is now on a deflating three game losing streak. The latest loss comes at the hands of the West Virginia Mountaineers.

Oklahoma State started off fast by hitting their first three 3-point attempts. Anthony Hickey was able to find open spaces and knock down shots. The Pokes jumped out to a 13-4 lead, but it wouldn't last. The Mountaineers put the clamps down on defense and used their notorious full court press to force turnovers, and the Mountaineers came back to tie the game at 13, thanks to a 9-0 run. The two teams traded baskets and were all knotted up at 25 at the half.

The Cowboys forced 11 turnovers, but had 8 turnovers of their own. Le'Bryan Nash led all scorers with 8 points in the half.

What seemed to be an inspired performance from Oklahoma State at one point quickly went away after halftime. West Virginia took a 31-29 lead at the 16:42 mark, and would not look back. Extending their lead to a game-high 13 points, it looked as if the screws were coming out for the Pokes. An alarming stat for the Cowboys; the two leading scorers, Nash and Forte, combined for a meager 21 points. If the Cowboys want to right the ship and make the tournament, the turnaround has to begin there.

Gary Browne broke the Cowboys proverbial back with three 3-pointers in the second half. He was the MVP for the Mountaineers on this day.

The Mountaineers won this game on the back of an inspired performance in the second half. After surrendering 11 first half turnovers, WVU would turn the ball over only two more times. While Gary Browne was excellent, Juwan Staten was his normal self, by racking up 22 points and 7 assists.

The Mountaineers out-rebounded Oklahoma State 37-20. Rebounding has been the direct result of the last two losses for the Cowboys. Both losses this week came when OSU was out-rebounded nearly 2:1. 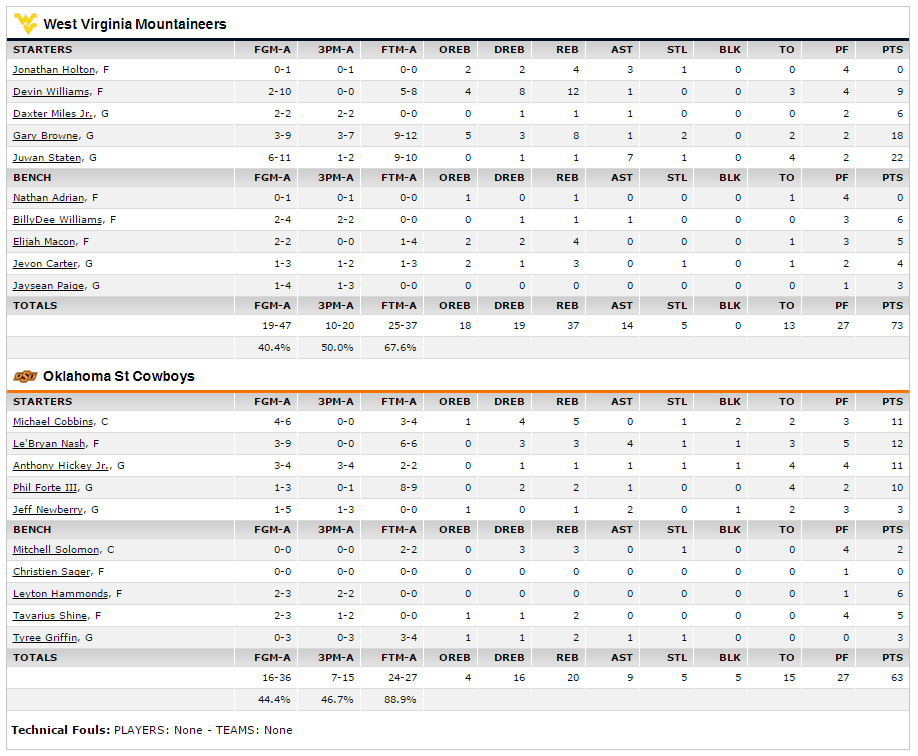