What We Learned: A 5-1 Record Is A Dumpster Fire

Here's the best of #CRFFWhatWeLearned this week, as Oklahoma State football prepares for the second half of the season.

Share All sharing options for: What We Learned: A 5-1 Record Is A Dumpster Fire

The Big 12 picture is starting to come into focus, but Oklahoma State fans aren't sure if they like what they see. The offense struggled once again, while the remaining teams on the schedule gave the Pokes reason to worry.

Before I get into the #CRFFWhatWeLearned tweets, I thought I would share some of the best tweets from my favorite new parody account. Everyone should be following @NotMikeYurcich.

FUN FACT: Mikey G and I met on the internet. Think of it like http://t.co/SNcrBlaBkI for coaches. People around the office call me catfish

People were tweeting me "Wake up Yurcich!" like how in the hell did they know I sleep during games

Tyreek said that if he doesn't get 20 carries Saturday he's going to go to OU. We all are going to OU in a few weeks. Haha, this guy

.@OkieStotts @CowboysRFF Like a go route, in traffic? We tried that and it got picked.

@ me next time RT "@ImFasterThanYa: Every man's ignorance is his mountain"

Let's get to it. Here's the best tweets from #CRFFWhatWeLearned this week!

#CRFFWhatWeLearned ou and osu fans are both unhappy with wins against teams they should have killed.

He was surprisingly upbeat.

@TGF97: If you think Gundy was bummed after Iowa State .....this presser is gonna be like a funeral... @CowboysRFF #CRFFWhatWeLearned

All of these things.

#CRFFWhatWeLearned OU will not win the big 12. Baylor is still going to put up huge numbers. Texas might be improving. OSU is in trouble.

Gundy will call in sick the rest of the season #CRFFWhatWeLearned

#CRFFWhatWeLearned Charlie Strong is big on discipline off the field but not on the field. Too many undisciplined mistakes. #TEXvsOU

How was this not day one or orientation? 'See this? Do this'

He's really turned it around.

@CowboysRFF Grogan is the most consistent player right now.. Which is scary

#CRFFWhatWeLearned That oSu has come SO FAR a 5-1 record is a dumpster fire. Hell, I saw the 0-10-1 year, this aint no dumspter fire.

Are you saying someone other than Yurcich should run it, or the parody account? I good with both. 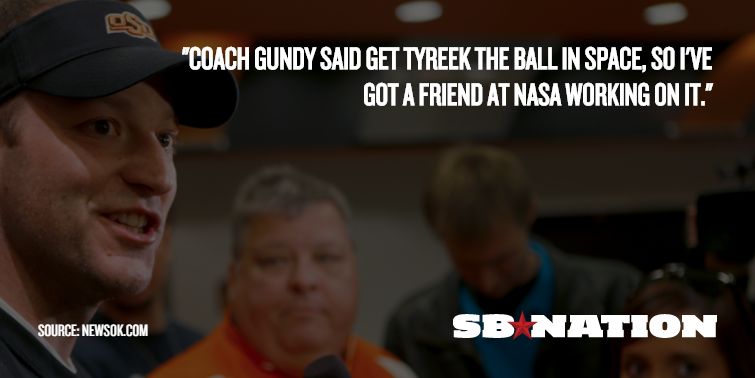 @ChrisRossCRFF best way to get TheFreek the ball in space ... KO returns or a rocket #CRFFWhatWeLearned