“It’s just strange to watch an Oklahoma State team, as coach Gundy told our teammate we don’t have that same explosive capability as TCU has, and that’s just weird to hear that statement to begin with, and then watch them struggle to manufacture offense” -Charles Davis

Share All sharing options for: OSU Chalk Talk: An In-Depth Look at the OSU's troubled Play-calling

Oh how times have changed. The days of high scoring games and electric offenses seem to be far behind us, and Oklahoma State has found a new identity - a conservative, run-based offense.

For the second year now there has been a significant amount of criticism on Oklahoma State's play-calling; this criticism has applied to every aspect of play-calling that an offensive coordinator is responsible for. In this post, we will look at two different sides of what has been an abysmal offensive scheme as of late - what plays are called, and when plays are called.

When many people criticize a play-caller, they only criticize what the name implies - the plays that the offense run. It is also important to note, however, the actual concepts of the plays that are being run, and how they can be fixed.

Here's what troubles me about the coaching - Their current base concepts are not home-run plays. Rather, they're just meant to get a couple of yards each snap. As I said last week, you put yourself in a better chance for success by opening up the box by using 10 personnel (one back, no tight ends), and you have a better chance of success with five blockers on five defenders than six blockers on six defenders. Alas, the Cowboys once again refused to run out of 10 personnel, only running out of formations with at least a tight end or fullback. By using their base plays in these formations without any use of misdirection, the lanes are clogged and possible gains are minimized.

Let's take a look at an example: 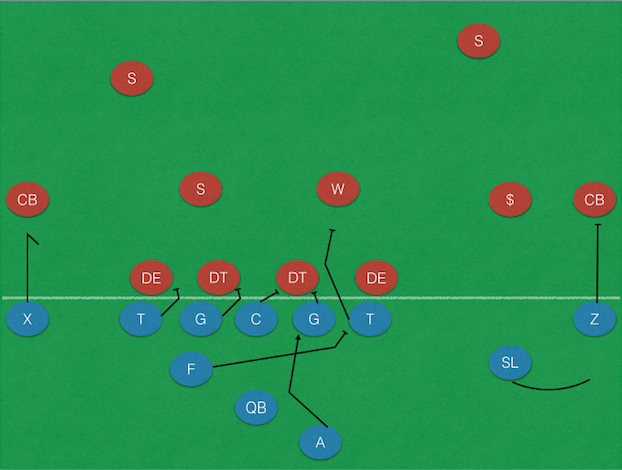 This is OSU's base wham play out of the wing offset. Since Yurcich has come to Oklahoma State, this has become their base play. For the past two years, the Cowboys run this play around 10 times a game. The play-side tackle goes past the end and climbs up to the linebacker, and the fullback comes across the formation to block the defensive end.

From what one can see, it seems that the Cowboys tried something new. Instead of having the tackle leave the end unblocked, they ran a play in which the tackle blocked the end and the fullback was expected to curl around and try to block the linebacker at an awkward angle. Take a look at this enlarged view:

Here's the view from before the ball is snapped. 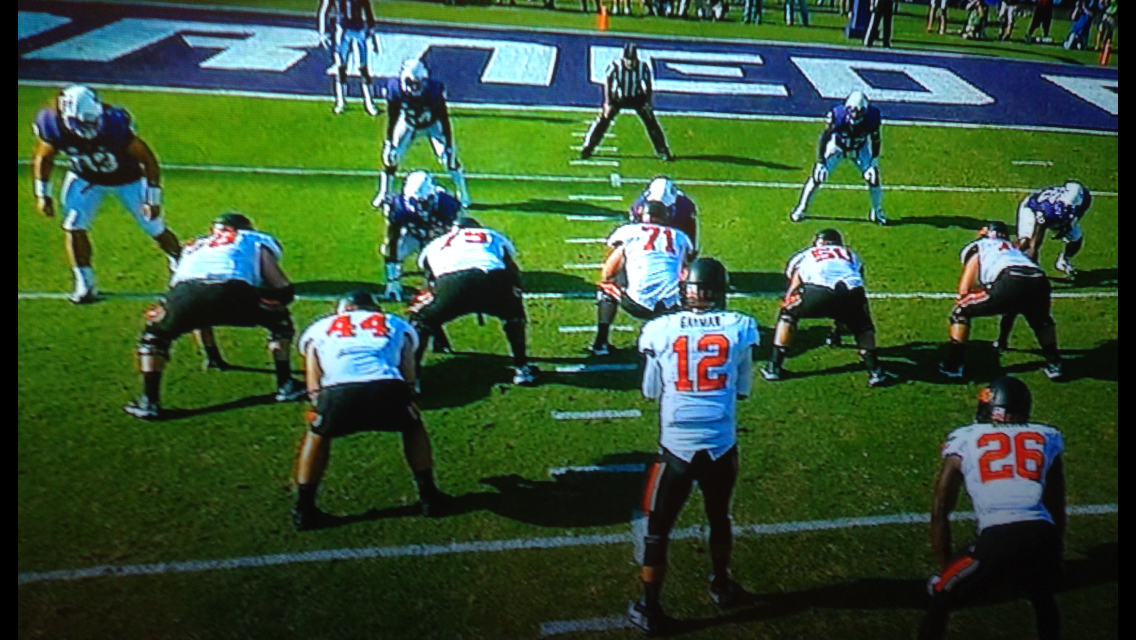 Here it is right after the snap: 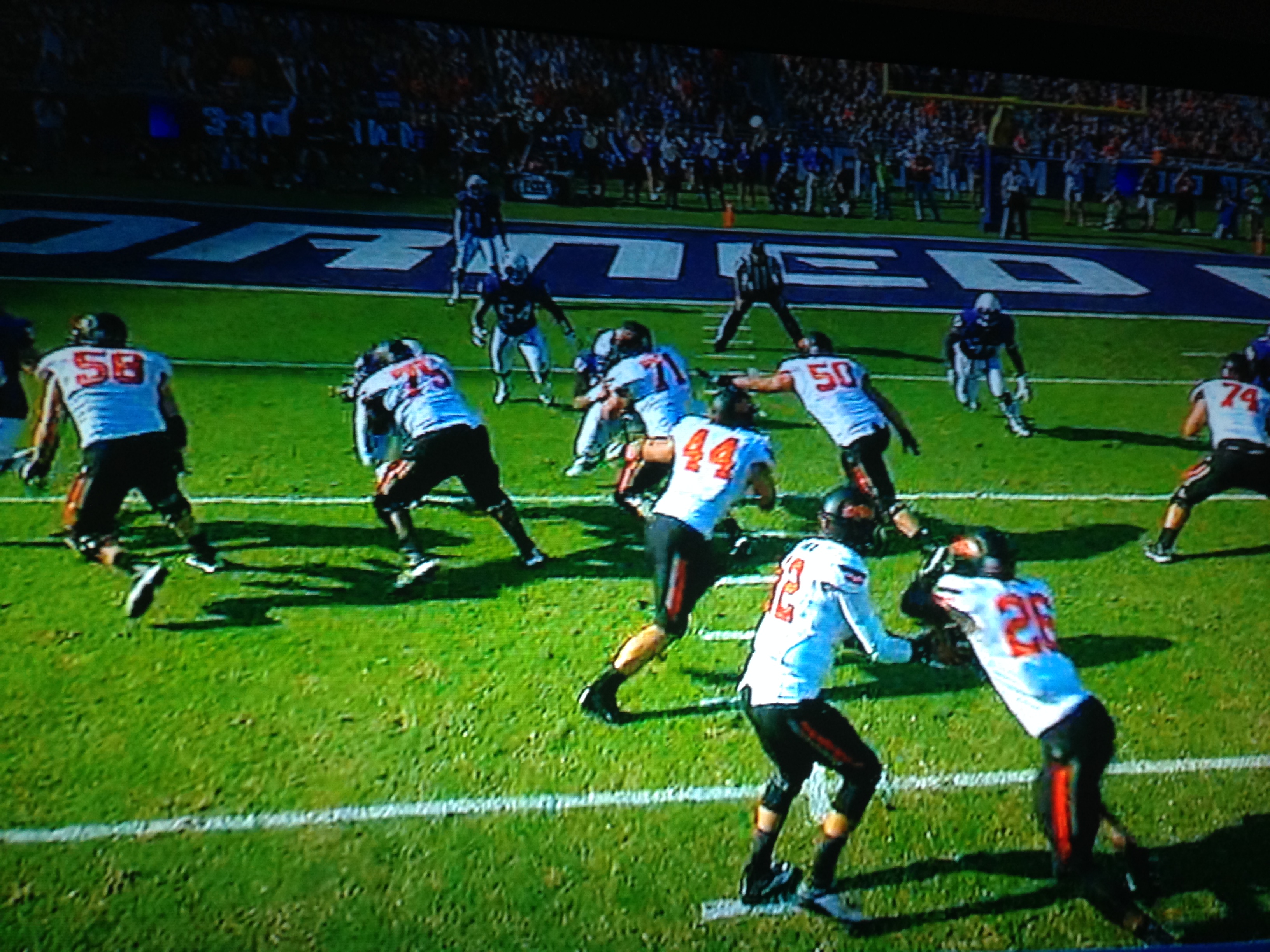 Notice to what I've said before, how instead of blocking the play-side linebacker, the tackle (74) blocks the end. The fullback tries to make his block, but the play design is asking too much of him. No player can be expected to come across the formation like that and try to block a moving linebacker. The play ended in the linebacker eluding the fullback and tackling Roland for a loss, forcing fourth-down.

Why would you not align in a wing formation where the fullback is directly in front of the tailback, giving him an easier path to the linebacker in what is known as an iso play. 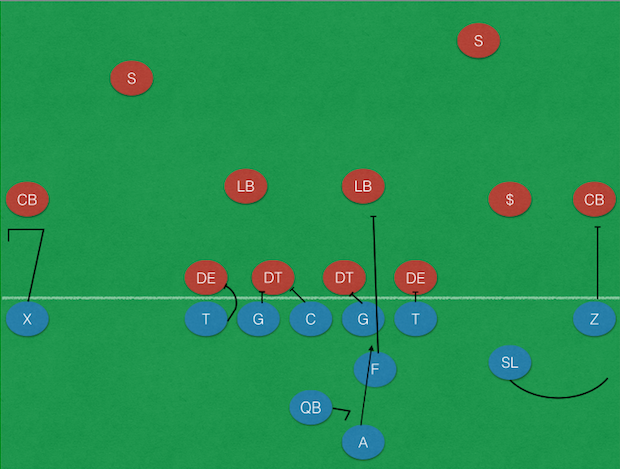 Now the fullback can charge straight ahead without having to come an extra ways from the other side of the formation. The change doesn't guarantee success, but it sure gives you a better chance than what you've been doing. There is still the slight possibility that the tackle just blocked the wrong player, in which the blame should be shifted from the coordinator to the lineman. Nevertheless, from what we can assume, this was by design.

The Cowboys seem to think that the only way to get Tyreek into open space is off of a swing pass. They've used a couple of other concepts with varying success, but they always like to go back to the good ole swing pass.

On all of OSU's called swing passes, they utilize what is known as a crab block. A crab block is where the lineman drop to the ground as to delay the defensive line's path to the quarterback. The crab blocking scheme is used on quick passes, or in this case, the swing. 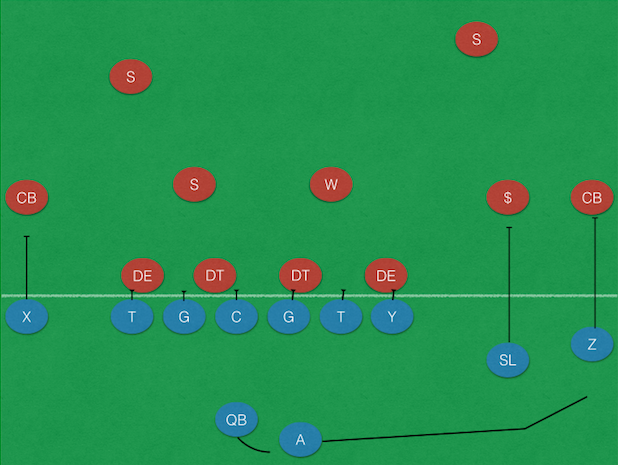 Here's the problem - by using the crab block with a swing pass, this leaves the linebackers uncovered. Once the ball is thrown to the back in the flat, all the linebackers have to do is run to the sideline and make a tackle. The Cowboys ran this play once early, and the strong-side linebacker saw the play and made the easy tackle for a loss. This disrupted their early drive which led to a missed scoring opportunity and a punt.

If you're going to continue your love affair with this concept, why not tweak the blocking scheme. 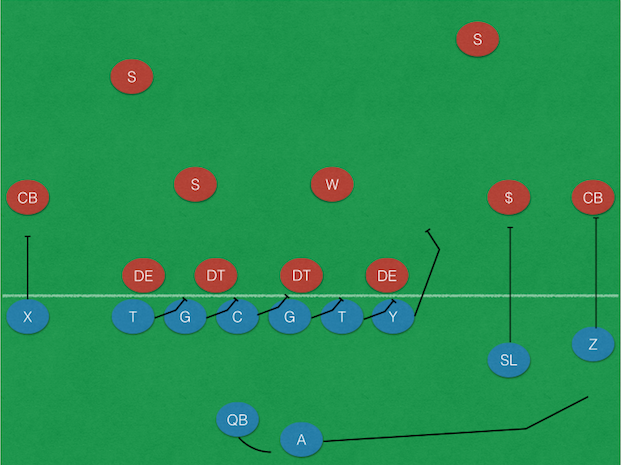 By adjusting the blocking scheme to resemble an outside zone, you account for the flowing linebacker. By having a blocker on him, you give your back a chance to get into open space (considering that the receivers block well).

I only chose two concepts to talk about, for sake of not boring you, but picking just two faulty plays out of this offense is like trying to pick out your two least favorite Bieber songs - there are just so many to choose from. Still, it gives you a look into how faulty play design can lead to bad outcomes.

FAULTS OF THE PLAY-CALLING

Not only do I see a problem in this offense schematically, but the play-calling tendencies also do not make sense to me. Per example: 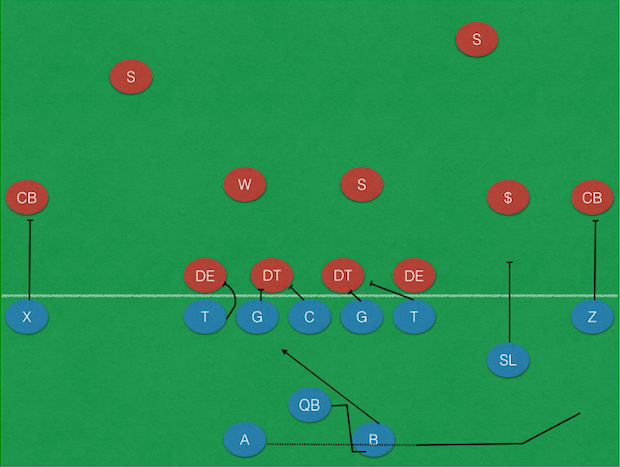 We have talked before how certain concepts can give you a leg up on the field. This play above is an inside zone paired with an outside swing pass. The Pokes have used this in the past with a lightning and thunder approach, having Hill be the swing man and Roland be the inside threat. It truly is a great concept, and it allows the offense to set up for counter or misdirection plays off of the same look. However, in order to utilize its effectiveness, you have to actually run the play in the first place. Not only did OSU only use this play twice, but they used them both on 3rd-and-14 or longer. I don't know about you, but that makes as much sense as trying to nail jello to a tree. The solution here is quite clear - use it in your offense consistently.

Oklahoma State has used a jet sweep in the past couple of games, with very limited success. They've tried an outside zone blocking scheme, they've tried a pin and pull sweep concept, and now they've tried an inside zone concept. My gripe a couple weeks ago was that by using an outside zone with a jet sweep, it gives away your hand. The linebackers follow the flow of the offensive line and make the tackle on the jet man. By turning to an inside zone, you disguise what you're trying to do; the linebackers see the lineman blocking what appears to be an inside zone and they stay frozen. By doing this, it allows the jet man to get to the outside and up the field. 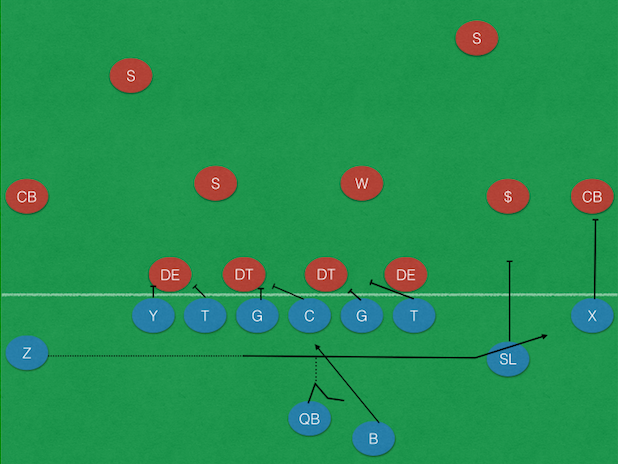 This concept, known as a speed shovel or speed sweep, was invented by Colorado School of Mines head coach Bob Stitt. The play was made popular in the FBS by Dana Holgorsen, who is now the head coach at West Virginia. Watch this video for a look at its effectiveness, and what it can bring to an offense.

For changing the blocking scheme and trying something different, I give the Pokes kudos, but I still have some issues here. First of all, you have to set up the sweep by bringing the motion across and handing it off to the back, so next time the linebackers stay put and expect the inside run. You can't just run it once and be done with it; you must set it up by using grouped play-calling like they did in that video. One play they might pitch it on the sweep, one time they might hand it off, one time they might call play-action, etc. OSU only ran this play once, and the jet man got stuffed by the unblocked defensive end. The reasoning here for leaving an end unblocked is used for the theory that he doesn't have to be. The tackle can seal the strong-side linebacker, and if the jet man (Z) runs to the sideline like he's supposed to, there's no way that the end can chase down a skill position player who's already running at full speed. But because the Cowboys didn't use this a lot, the jet man didn't know what to do. He tried to cut up inside of the end, leading to a big loss on the play. The coaching staff must tell the receiver to never cut this play inside, because you're running into traffic as opposed to running to the sideline where there is open space. The Cowboys never used this play for the rest of the game.

The solution, like the play we talked about earlier, is simple - stick with it. If something doesn't work, don't give up on it. If an option team like Georgia Tech or Army had that philosophy, what would they do? Just because it doesn't work once doesn't mean it's a bad play, and to the point before this, just because it does work once doesn't mean it's a good play.

At this point, the Cowboys must take another look at the offense from all perspectives - from the plays, the play-calling - everything. This does not mean that they have to over-complicate things by adding 20 new plays in this next week, which from what we know from Gundy's current philosophy, that will obviously not be happening. It's okay just to run a handful of plays, but it's how you run them that makes them effective; how you run the plays applies to both the schematics and the sequence in which you call them. No one's asking this offense to resemble the production of the Weeden era, but we are asking for some success. Is that too hard to do? Looking at their next five games, let's sure hope not.