Since their troubles couldn't possibly fit into a single post, we'll just focus on their ground game this week and get to their passing game later.

Last week, we talked about how using multiple backs and tight ends at a time will load up the box with defenders. For a team who has trouble at the offensive line, it makes it even more difficult when you crowd the box. After the TCU game, I pleaded for OSU to use less fullbacks and tight ends so that the box won’t be as crowded. How frustrated do you think I was when I watched this team play WVU and use not less, but more tight ends than they did last week. To no one’s surprise, this did not work in favor of the Cowboys, and although they ran for over 100 yards, this was a testament to the players, not the play design.

A team like Oklahoma State should do everything in their power to aid a troubling offense. Teams of the past who have been in in similar situations have gone to the spread, using spacing and wide formations to help hide deficiencies such as a mediocre offensive line. The spread offense is the ultimate equalizer, and has been leading the underdog to victory for decades. So if you’re Oklahoma State, who has a troubling offensive line, why do you not try and use what has worked for hundreds of teams who have been in your exact same position.

In a spread offense, you make the defense cover more grass, and you can have a lot of success on the ground in spread-out, 10 personnel formations like this: 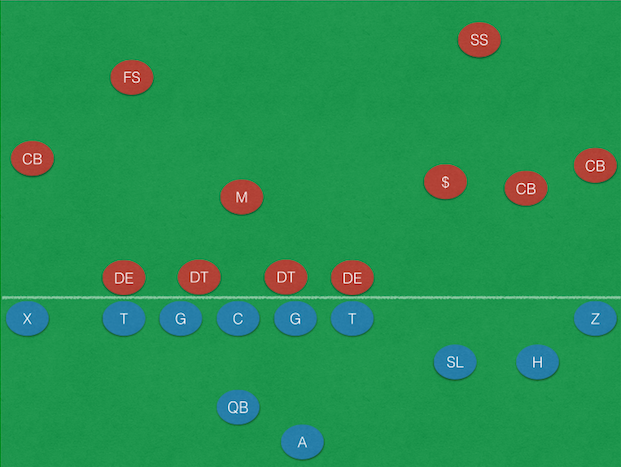 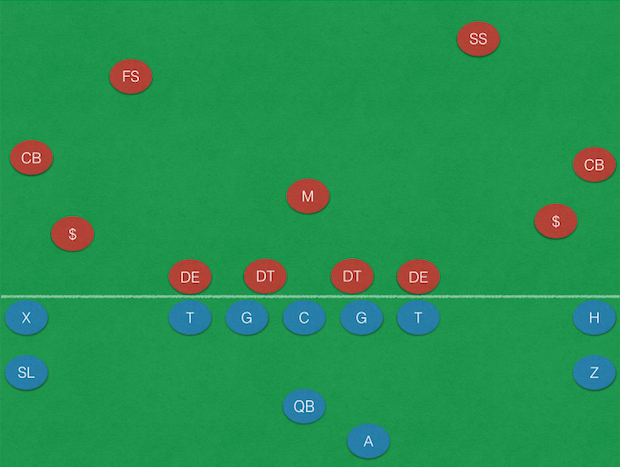 Yet for the Cowboys this season, they do not follow this path of thinking. Instead of spreading out the defense by using four receivers, they pack the line of scrimmage by using heavy formations like this 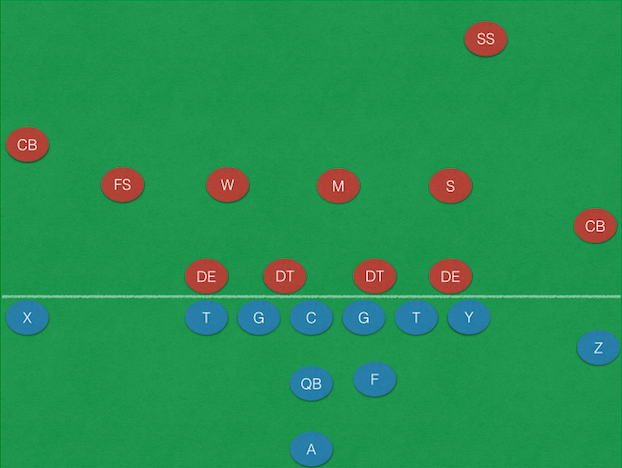 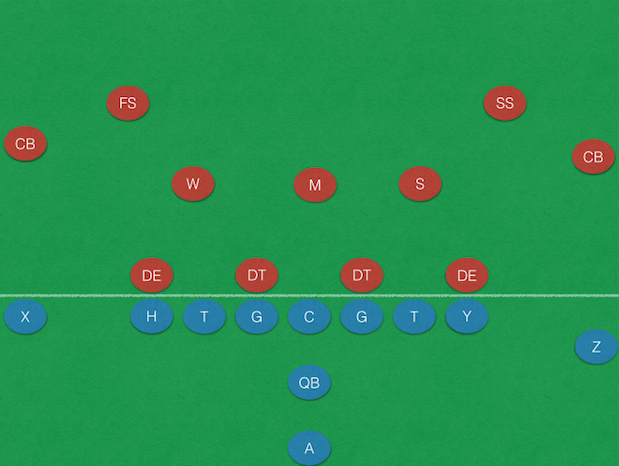 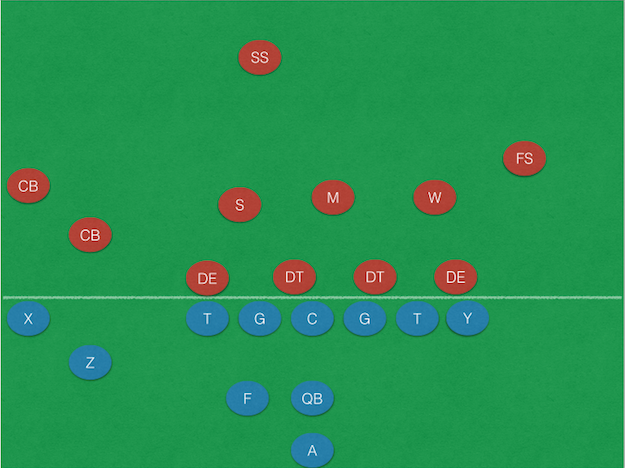 It makes no sense to me for a team like this to pack the line of scrimmage and try to ground and pound your way down the field.

Spread schemes are successful because they use formations and schematics to get their players into open space. In order to accomplish this in the run game, you want the box to be as uncrowded as possible. We touched on this last week - you have more potential for your ballcarrier to get past the second level with five blockers on five defenders than with six on six or seven on seven. Think about it this way - 1) more blockers bring in more defenders, creating clutter. 2) The more blockers you use, the more chances there are for one of those players to miss their block. 3) When you use more blockers, you have to worry about more complicated schemes. With an inexperienced line like this one, there are more opportunities for mental mistakes. Conversely, 1) less blockers means less defenders, which translates to less clutter. 2) The less blockers you use, the easier the scheme is. 3) Because of the design of the spread, especially when you're in 10 personnel, all the lineman have to do is block the man directly in front of them. The spread philosophy helps all of these problems. Because of the blocking scheme and the spacing, you give your players a chance to get into open field. This is the basis of the spread offense: use schemes that get your offense into open space.

Take a look at Baylor's use of spacing and formation to spread out the defense: 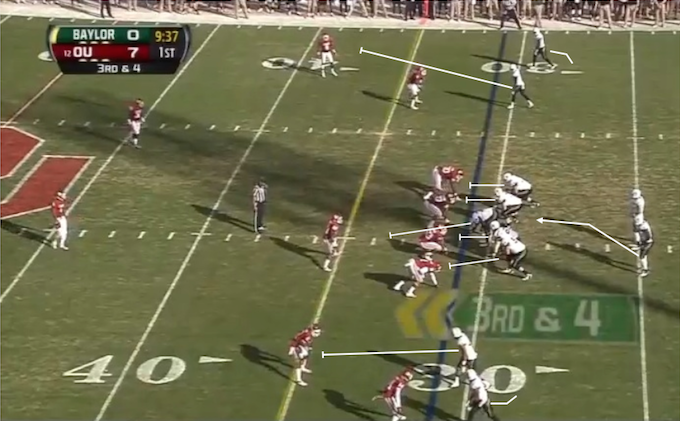 Because of the spacing, there is open grass everywhere. Additionally, if the lineman just block the man in front of them, your halfback has a clear path past the second level to the safeties. By not cluttering up the box, it's easier for the halfback to find a hole and burst upfield. Now how easy is it to find a hole to burst through in comparison to this: 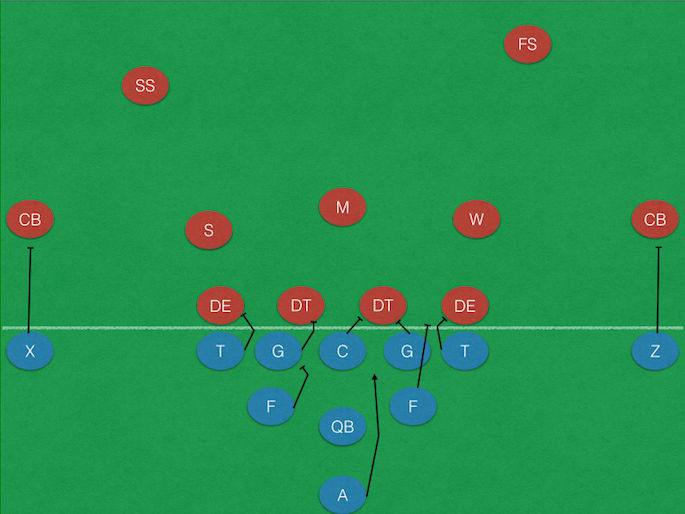 Not only do these formations allow the defense to stack the line of scrimmage, but they are extremely limited in outcomes. Many times when OSU came out in these formations, the defense showed run blitz and Garman couldn't do anything about it because he had no plays to audible to. I don't understand why the Cowboys are making it so hard on themselves. This is why the spread offense has been so successful. Going back to a team like Baylor, they want to play fast and efficient. In order to accomplish this effectively, their audibles are already in the play. This is called a packaged play, which the Cowboys occasionally run. They don't have to audible, because if the defense overreacts one way, they have built-in options to take advantage of over-aggressiveness.

Take a look at this: 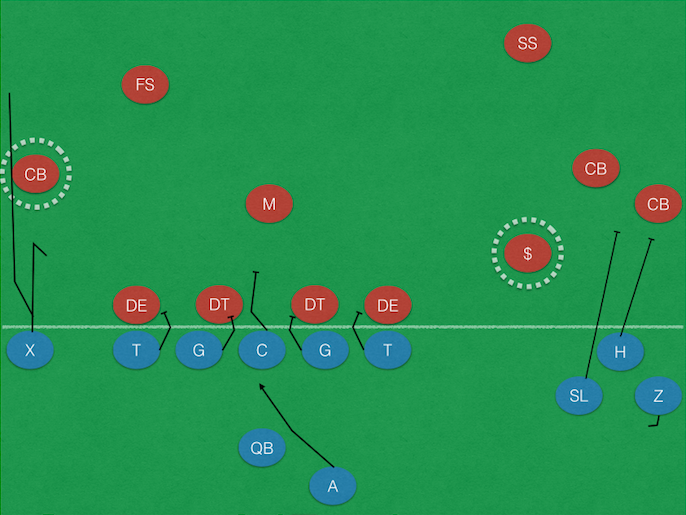 This is a base trips bunch inside zone. The play has multiple concepts built into the play to counteract any defensive alignment. If the defense covers it in their base defense, you have a five-on-five advantage in the box. If they bring the nickelback ($) into the box, you've got two on three on the perimeter, giving you the advantage on the screen. If the secondary rolls strong-side and the back-side corner is playing off of the "X" receiver, the quarterback throws quick to him on the curl. If they roll a safety down into the box and show a cover 1, your "X" receiver has one-on-one on the perimeter and the quarterback can hot route to a fade down the sideline. Now obviously, the quarterback has to make the right reads to utilize the play's full effectiveness. In the past, Daxx has both made the wrong decision or ignored easy screens within the packaged plays that they do run, but theoretically, plays like this give you every chance to end successfully. Now compared to that, how many options does this play have: 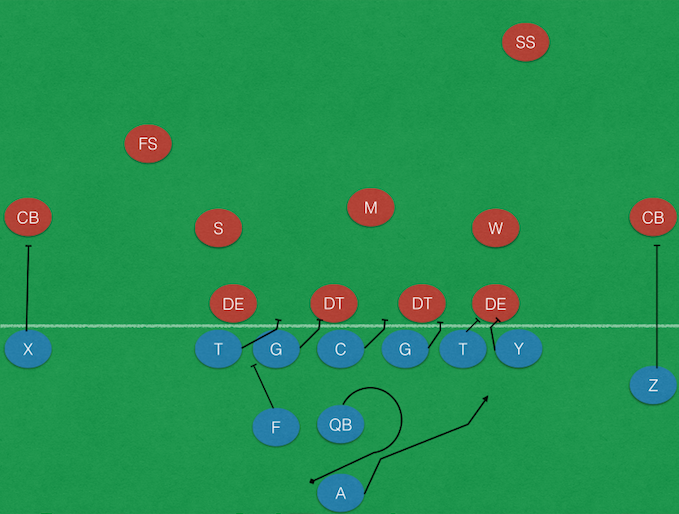 When you align in heavy formations, there really isn't another place to where the ball can go to. And when you call this play in the situations like the Cowboys did, like on second-and-8, the defense knows it's coming. Among other things, it's this predictability that leads to unsuccessful drives, but we will talk more about their play-calling deficiencies on another day (and boy will that be a long post).

If you're Oklahoma State, you need to take a look at your schemes and ask yourself if they truly give you the best chance to win. I have said this many times and I will say it once again - it's not the fact that they repeat plays that makes me frustrated; rather, it's both the plays that they are repeating and in what situations they run them. Whether that's on Yurcich, Gundy, or someone else, they seem to be calling plays almost like scoring isn't their main objective, as if it's not completely imperative to score. When the quarterback throws a bubble and hands it off twice when his team is down by 10 with nine minutes left, people tend to scratch their heads. When you are über conservative on third downs, you are subject to some disagreement from the fans. When you call the game very predictably, you are likely to get some criticism. Until they change something soon, this run-based offense isn't going to be an exciting one.

What are your complaints about the offense? Voice your thoughts in the comments below.