A brief analysis of Oklahoma State's offensive performance vs. UTSA

Share All sharing options for: Oklahoma State's Daxx Garman and the Deep Ball: A Love Story

What happens when you combine conservative play-calling and aggressive quarterback play? Voila, the answer is right in front of us. Oklahoma State featured their converted offense this Saturday in their 43-13 win over UTSA. For anyone who watched the game, it was easy to see that the offense was hit-or-miss. While the Pokes threw for 315 yards, there was one period when they had four three-and-outs in a row, at which time they gained only 11 yards. Still, there’s no doubt that this offensive mindset has taken a complete 180.

Many people criticized J.W. Walsh for not having the ability to stretch the ball downfield. Whether or not this is true, that criticism does not apply for Daxx Garman. If you haven’t already noticed, he is not at all afraid to go deep. In the past two games, Garman has completed 18 passes of 15 yards or more. These passes span from the 30-40 range all the way up to last week's 87-yarder. Additionally, all of his short passes were from throwing quick swings or screens in their running game. With him, there’s no in between.

Part of last week’s post was speculation on how the Cowboys would incorporate their running game in a vertical offense. While this game’s play-calling was vanilla (no surprise there), Yurcich added some new concepts to the Cowboys’ offense. In the past, we have brought up the concept of a pop pass. Apparently, someone was listening. The Cowboys added the new wrinkle to combine the run game with their go-deep mentality. 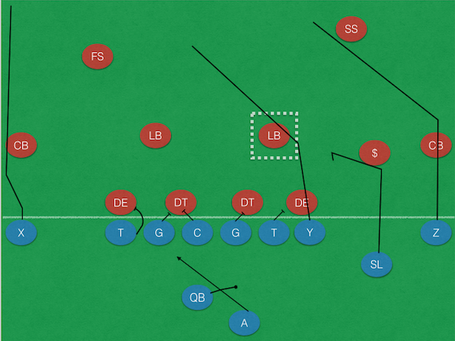 OSU has taken the pop pass and adjusted it to fit their vertical passing style. This one play gives Garman many different options to where to put the ball. If the defense plays loose, it opens up the box; if they commit to the run, it opens up for passes downfield.

He can hand it off:

He can pull the ball and throw to the tight end:

Or he can take advantage of single-man coverage:

Plays like this give the offense a boost, as well as fitting Yurcich's tendency to call the same play 2-20 times. As Daxx develops, he will learn to maximize each play's effectiveness by evenly distributing the ball.

Finally, we look towards the coming weeks. As teams study Garman’s tendencies, they will likely react by playing cover three or quarters coverage. If this is the case, it's going to open up a lot of room for the short and intermediate routes. We saw this late in the fourth quarter, with Garman taking advantage of the screens and quick throws in the run game. This must continue if they want the defense to respect the short pass. Otherwise, defenses will play four-deep the whole game in an effort to make the deep pass obsolete.

As far as the ground game is concerned, they must remember that they no longer have a running quarterback. Watch the tape - on any given run play, every defender is eying the halfback, disregarding Daxx as a threat on the ground. Hopefully, we see them take advantage of this by using a good mix of play action, bootlegs, and zone reads. Whatever they add, they have a little under two weeks to prepare for their next game vs. Texas Tech.

The offense is still a work in progress, but it is clear to see that with Daxx, the passing game is a force to be reckoned with.