Oklahoma State - An Offense in Progress

An in-depth look into Oklahoma State's offense vs. the Red Raiders, and what it might mean for the future.

Share All sharing options for: Oklahoma State - An Offense in Progress

The Cowboys arguably had their best offensive performance this past Thursday against Texas Tech, putting up 45 points and 528 yards of total offense. Still, there is much room of improvement. Today, we will take a look at some of the things that they are doing, as well as what they can improve on. In this post, we will analyze the addition of grouped play-calling, as well as both the running and passing game.

The Cowboys seem to have built a quick -hitting all or nothing reputation as of late. Their drives usually end in a quick score or a quick three-and-out. For the Texas Tech game, not only did their touchdown-scoring drives average a little under four snaps, they only had two drives that lasted more than five plays. If they don't want their defense to be on the field for 90 snaps each game, they must be able to establish some consistency.

The Pokes used an interesting tactic, putting Hill and Roland in the backfield simultaneously for a lightning & thunder attack. Hill's outside swing threat and Roland's inside run threat complement each other well. Although they only gave it to Roland and never swung it out to Hill, this can set up for a number of things in the future. 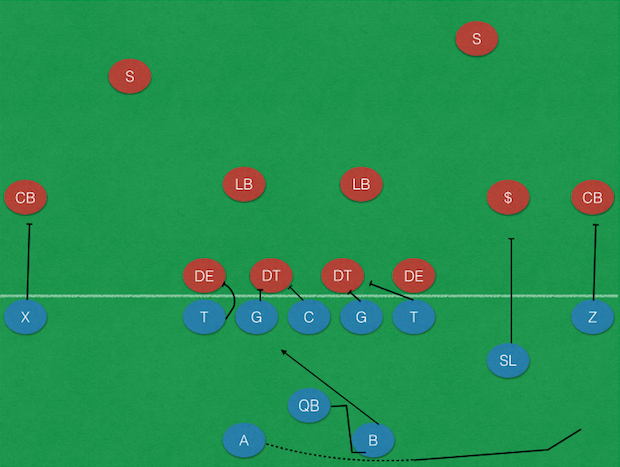 They also used the jet motion that we talked about two weeks ago, ending in handoffs to Roland, sweeps to Hill, or play action passes.

A quick note - to me, a guy like Hill doesn't need blockers, he just needs open space. If you watched the link of Hill's jet sweep (above), they treated their sweep like an outside zone, with all of the lineman shuffling to the play-side. By tipping their hand with the blocking scheme, it allowed the linebackers to quickly spot where the ball was going, leaving Hill with nowhere to go. Why not have the sweep be disguised as an inside zone, letting the lineman block downhill instead of side-to-side to keep the linebackers at bay. West Virginia certainly knew how to use their speedsters, and in many cases, their jet sweep and inside zone were the same play; it was the quarterback's decision to where the ball went.

By doing this, even with the jet motion, the linebackers are forced to pause for a second to see if it is an inside handoff, giving the jet man time to get to the perimeter. This isn't a necessary change, just a mere fan suggestion. Still, success or no success, these plays set up for counter plays such as this one:

Now a quick blurb about the passing game. The Cowboys have found their new favorite passing play. They ran this play five times vs. the Red Raiders, and Daxx went deep each time but one. 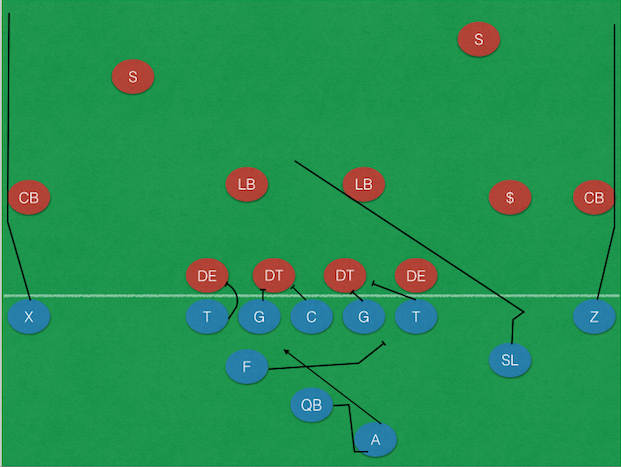 Over the past three games, the Cowboys ran this play around 15 times. The slant in the middle of the field sucks in the linebackers, allowing for true one-on-one coverage down the sidelines.

While their deep passing game is impressive, let's hope that they try and add something to the intermediate passing game, maybe by bringing back the famous stick-draw play of the Holgorsen era.

And finally question we've all been waiting for - why can't OSU run the ball?

On their base run play, either the wham or the inside zone, the Cowboys always had at least one tight end or fullback on the field. This brings an extra player into the box. There is a common misconception that in order to run the football, you must pack as many blockers as you can between the tackles. For a team like OSU, this is exactly what you don't want to do. 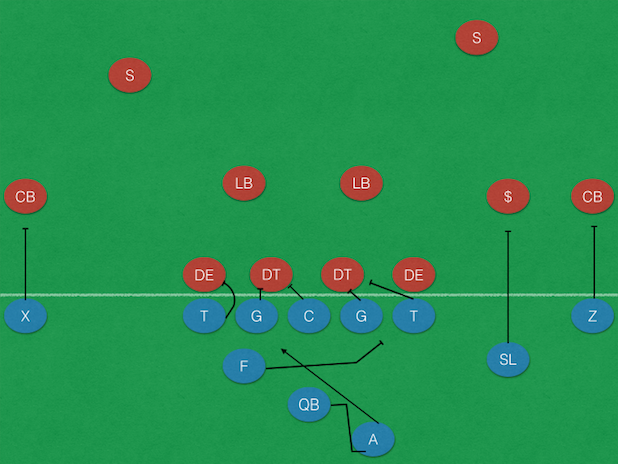 The play above is the Pokes' staple run play. By bringing in an extra back, the defense puts six players in the box, giving a six-on-six blocking scheme between the tackles. The problem that I have noticed is that the Cowboys' offensive lineman aren't quick enough getting off of their double teams to block the linebackers. This allows penetration, leading to minimal gains. If you're the Cowboys, why not spread the defense out? In any spread system, less is more, and if you have the choice to have 6-on-6 or 5-on-5, you should take the latter rather than the former.

Partly why the 2011 Fiesta Bowl-winning Cowboys were so successful at running the ball was because they knew how to both spread the defense out and use their run and screen game in tandem. 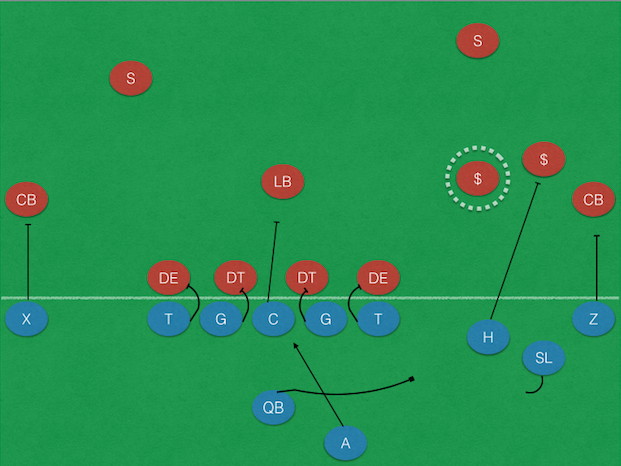 Now, unlike the Cowboys' current wham play, the quarterback can put the ball in a number of places.

He can either throw the quick screen:

Or hand the ball off:

This forces the defense to cover the entire field horizontally and opens up the box for a more efficient run game. Additionally, the blocking scheme is quite simple, with the lineman just being responsible for the man in front of him. This takes away the need for a double team, which always leaves the possibility of linebacker penetration.

All things considered, the offense was pretty solid. They have a long way to go, with a fairly inexperienced quarterback and a sub-par offensive line, but the weapons are there. If the Cowboys are able to find their niche before their difficult back-half of the schedule, this offense can end up scoring a lot of points.