What was an otherwise fantastic game was marred by sloppy, inconsistent, and woefully pathetic Big 12 basketball officials, to which we are all becoming way too accustomed.

I spent a couple of years officiating hoops while I was in college. One of the first things we were told in our training was to not be noticed. When a game was over, you NEVER wanted to be the topic of discussion. NEVER be the reason for the result.

That mantra was always about the missed call. The whiff. Most fans forget the whistle that maybe shouldn't have been.

They NEVER forget the whistle that should have happened, but didn't.

After digging themselves a 17 point hole at halftime, OSU predictably dug themselves out. In a game that came down to the final possession and was decided by 2 points, this should have been a basket for the Cowboys... 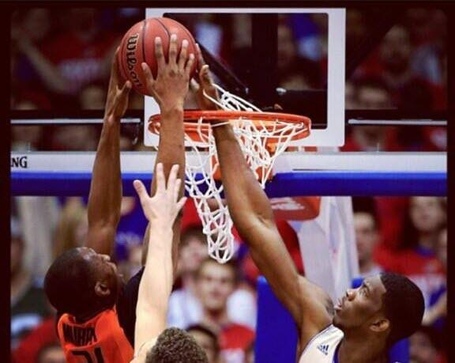 ...and this shouldn't have been a basket for the Jayhawks... 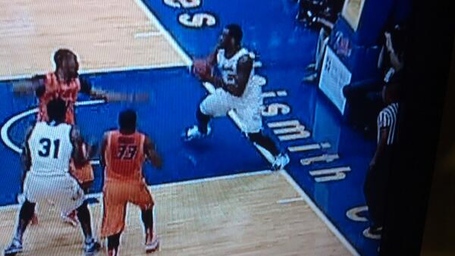 via pbs.twimg.com (notice the ref standing about 5 feet away?)

As a coach, I always told my players that the officials didn't matter. There would always be plays we should have made that could have turned the game a different direction.

I don't doubt that this is the case for OSU. Horrible shooting in the first half (8-26) helped dig the hole. Kansas played some pretty good defense and Embiid was a force inside (uncalled goaltending above not withstanding). The Jayhawks also hit a couple of big 3's in the last couple of minutes to help keep the Cowboys at bay. OSU took WAY too long to put up a shot with under a minute to play, and the last possession should not have ended up in Nash's hands.

Keep in mind OSU made their comeback while Kansas was busy shooting 66.7% from the floor in the second half. How did they do that? In the first half the Jayhawks took 8 more shots than the Cowboys. In the 2nd half? OSU took 22 more shots than KU.

I wouldn't complain too much about the fouls. KU went 15-23 from the line while OSU was 14-16. This is not an unreasonable discrepancy.

But this is NEVER what you want as an official.

Two horribly missed calls that, if made, could have changed the outcome of the game. I won't even go into all the reviews, double fouls, double technicals, and discussions. I set my TIVO to record 30 extra minutes, which wasn't nearly enough.

The name John Higgins comes up often. He worked the game today in Lawrence. I really don't care because I've seen plenty of awful officiating without him being present. The ref in the pic above was NOT Higgins.

In conclusion, let me be clear...

The refs are NOT the reason OSU lost the game. I will never go down that path, and I think I made that clear above that the Cowboys and Jayhawks contributed plenty to the outcome of the game.

I just hate it when refs become a significant part of the result, and Big 12 basketball officials are becoming especially adept at exactly that.

I look forward to Kansas and Bill Self visiting GIA. Should be quite the scene.