Might not have been pretty, but OSU got the win thanks to everyone who played...except Marcus Smart.

Le'Bryan Nash and company carried the day, despite what amounts to an 0'fer from Smart, and 2 of 16 shooting from 3 for Brown and Forte combined. Nash posted a career high 29 points, tossed in 9-14 from the line (needs to be better) and 9 rebounds before fouling out late.

Couple of good moments, and both involved Markel Brown dunks.

First, the flurry at the end of the first half...pay close attention to Markel after Nash's dunk...

Notice that the whole thing started with a poor decision by Clark. He should have shot the 3. Instead, he gets bailed out by Brown's put back.

Then came what Brown later referred to as one of his top 5 dunks all time:

The impressive part of this game was the effective absence of Smart, and yet the Cowboys clawed out a win against a team that is NOT a bum. Smart was pretty much reduced to this... 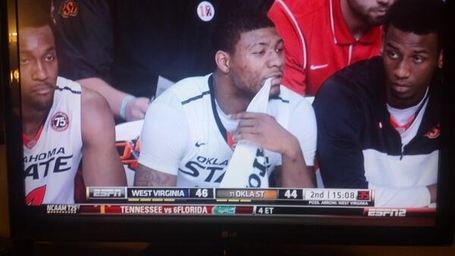 Chalk up an important win, then it's on to Norman.